During our adventures on the long weekend we did a bit of fishing. No luck, but that's beside the point. Being out in the canoe is treat enough.
This time we got a special treat as we saw a nest with an eagle sitting in it.
I had my Olympus 810 with me so the photo is only adequate, but it is a photo and I am grateful I got a picture. I am even more grateful that we got to see the eagle.
Posted by Leah J. Utas at 1:48 AM 13 comments:

The woods are full of surprises. All you need do is look.
Posted by Leah J. Utas at 2:45 AM 17 comments:

My husband likes to keep himself busy. His latest project is a carved bench.
Rather than me explain I'll let his work speak for itself.
Please note the bench still needs to be painted.

Today is Towel Day.
On it, we carry a towel in honour of Douglas Adams, author of The Hitchhiker's Guide to the Galaxy.
If I leave my home today, I will have a towel.
Will you? 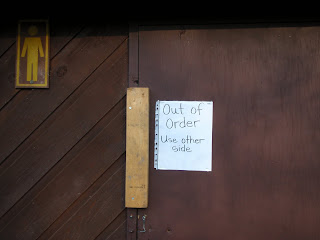 How in the world can a pit toilet be out of order?
Please note this is a rhetorical question.
I don't want to hear your theories.
I have my own.
I am trying not to think about them.
Have a nice day.
If that's possible now.
Posted by Leah J. Utas at 11:04 AM 18 comments:

We went camping at Medicine Lake north of Rocky on the weekend. Even though we didn't go until Saturday and did not make a reservation we found a spot in the campground.
It was our first time out with the new RPOD and it was quite the learning experience.
We learned the plug was missing on the water tank. We got a replacement and then found the original later.
We learned the fridge takes a great deal of power if left on the highest setting.
We learned heating the water takes a great deal of power.
We learned when the power runs out the propane warning sounds.
We learned how the carbon monoxide and smoke detectors come off when we're trying to find the source of the high-pitched warning.
We learned that sleeping bags spread out as blankets isn't as warm as it sounds.
We didn't get a chance to try the stove. We can learn about that next time.
I am grateful for all that we've learned and will learn about this kind of camping, and I am especially grateful we were only about 30 miles from home when we learned it.
Happy Victoria Day.
Posted by Leah J. Utas at 2:36 AM 14 comments: 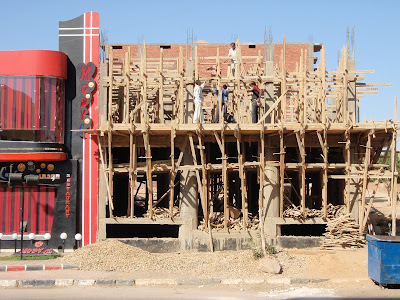 When Bugs Are Pretty 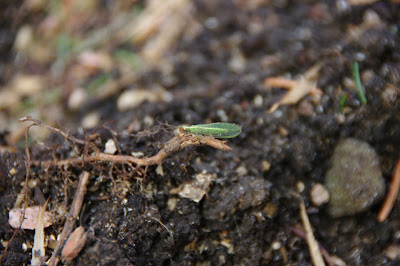 For an insect, the green lacewing is really rather pretty.
This one was in the side garden along the house yesterday.
Posted by Leah J. Utas at 1:06 AM 15 comments:

Our bedtime story is Journey to the Centre of the Earth, Jules Verne (Puffin Classics, reissued 2008).
We're quite enjoying it.
It's just the right weight for a proper bedtime story.
Two sentences:
"The town stretches along some low, marshy ground between two hills. A huge bed of lava lies on one side of it and slopes gently towards the sea."
#
I've managed a bit of writing this week. Harvest is barely plodding along, but at least there's something happening.
Two from Harvest:
" 'There's no use.You can't run away from you and the more you deny me the stronger I'll get.' "
#
Thanks for being here. For more or to get in on the fun please see the Women of Mystery.
Posted by Leah J. Utas at 1:29 AM 10 comments:

I'm grateful this fellow stopped by for a visit. His mate was on a different part of the railing, but was camera-shy. 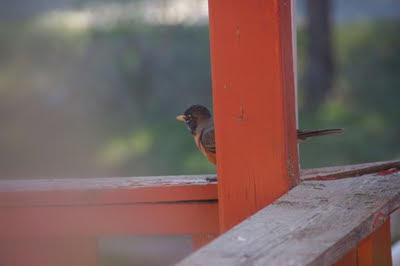 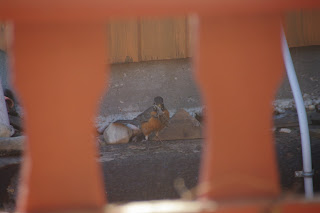 Here he finds potential nesting material along the garage. 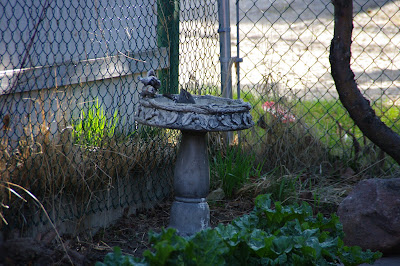 Then a quick dunk in the bird bath. 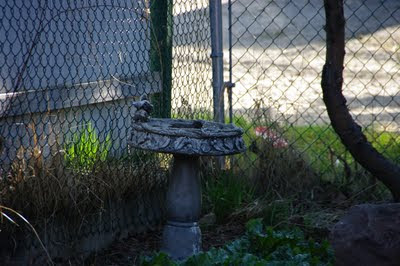 And he was on his way.

We don't often get robins on the deck railing so that was a treat in itself. Also,  they weren't much for using our birdbath as they preferred a group splashabout in the local mud puddles.
I moved the bath last week. Perhaps it is more favourable at the far end of the garden.
I hope so.
Posted by Leah J. Utas at 1:33 AM 12 comments:

Photo-Finish Friday -- In the Alley 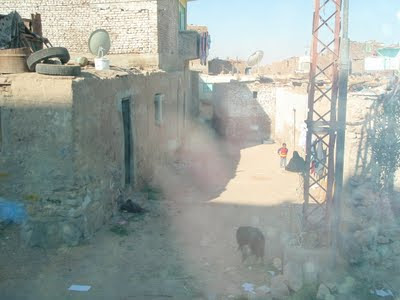 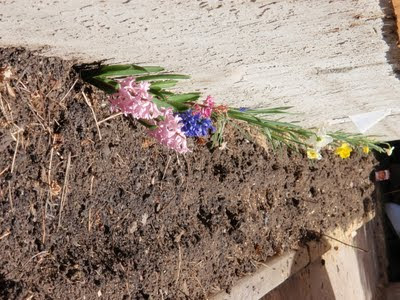 The recent warm weather has worked it's magic.
The flowers my husband planted along the south side of the house are up and smiling in the sunshine.
It's a colourful start to the growing season.
Posted by Leah J. Utas at 2:54 PM 16 comments:

Writing hasn't progressed much lately. I've been stuck on the synopsis for Dead Broke and it's more of a dead weight than anything. I have a workable draft ready, but haven't honed it. I think it's because I've got no pressing need for it.
Currently 16 of the 25 query letters I've sent out are on the loose, eight have garnered rejections, and one has resulted in a request for a partial. I'll be waiting a bit longer before sending out another wave and until I do the synopsis can fester to its cold, dark, heart's content.
Bound wasn't getting anywhere. I could not get a handle on it. I realized that I'd done too much set up work for it. I'm a pantser, not a planner, and all the world-building I did used up my energy.

It got one last read over before I took it out behind the hard drive and put it out of my misery.  Some of the ideas will go into my latest WIP, Harvest.
#
Here's a wee taste:
She slipped into bed and stared up at the plain ceiling. The presence was still there, sliding around the back of her neck to her throat, threatening to choke her.
#
I had the disappointment of reading Mary Poppins last week. While it had some good scenes, and some good ideas like how the infant twins could talk to the birds, and how Mary Poppins understood and was loved by animals, she came across as a horrid, cold, bitch most of the time. Something wonderful would happen and as soon as it was over she would disavow all knowledge of it and as much as call her young charges liars.
She sniffed derisively a good lot of the time. It's a fine description, but it was overused to the point I wondered if she was a cokehead.
All that aside Pamela Lyndon Travers was a successful published author of several books, had a movie made out of Mary Poppins, and lived a good, long life.
Good on her.
#
Two sentences from Mary Poppins, P.L. Travers, (Harcourt, 1997)
" 'What?' said John and Barbara together in very surprised voices. 'Really? You mean they understood the Starling and the Wind and --'
'And what the trees say and the language of the sunlight and stars--of course they did. Once,' said Mary Poppins."
#
Thanks for coming by and having a read. I appreciate it.
For more or to get in on the fun, please see the Women of Mystery.
Posted by Leah J. Utas at 2:51 AM 269 comments:

Gratitude Monday -- Around the Corner

I am grateful that the path always leads somewhere interesting.
We never know what is around the corner.
Posted by Leah J. Utas at 2:48 AM 11 comments: 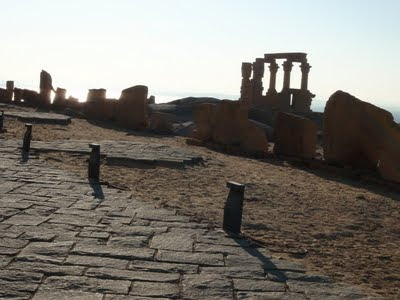 Sunrise on an Egyptian ruin.
This site contains the oldest pictures on rocks found in Egypt.
Posted by Leah J. Utas at 1:02 AM 17 comments:

May The Fourth Be With You

Gratitude Monday -- Vote Today. It Could Get Weird.

It's Election Day in Canada and it might get weird.
The New Democrat Party is surging in Quebec.
Jack Layton may just find himself the leader of the Official Opposition once all the dust is settled. His party is so close to the Conservative's level that the possibility exists he could be Prime Minister Jack Layton in a few hours.
This is a new wrinkle and it's interesting to see it in our usual staid, predictable Tory or Grit elections.
I'm grateful that the election about nothing finally got interesting. I am grateful that voters realize there are more than two parties in the country as it gives the leaders of those two parties something to fret about.
I am grateful that there are more than two parties in the country.
I am grateful that we live in a country where we have some say in who runs the joint.
Vote.
You might cringe at the result, but at least you'll have done something.
Posted by Leah J. Utas at 3:09 AM 13 comments: