These bags, some 20 of them, are filled with carrots.
Husband grew them. He brought home nine and a half five-gallon buckets full of them on Saturday.
He washed them. I chopped them.
I still have to blanch them and find room to freeze them.
It's work, but it's good work, and I am looking forward to homegrown carrots through the winter.
I love carrots and I am grateful for each and every one of them.

A Bighorn Sheep enjoys some tender summer grass on a hilltop south of Hinton.
Posted by Leah J. Utas at 6:18 AM 4 comments:

We leave behind what we no longer require
so that we have room for what we desire.


This wee bit of wisdom came to me this morning during my personal writing time. It's nothing revelatory. It's commonly said we have to get shed of the old to make room for the new.
But the way it coalesced suggested to me I needed to remember it, record it, share it with all who happened by.
And so I do.

It's tough to do. I am not good with throwing things out. I have books I picked up at recycling that I decided against reading. I've been meaning to return them so others can read them.
I'll do it.
But they're books.
They're safe with me.

Physically getting rid of items I don't want and won't use is hard enough. Leaving behind ideas and beliefs and the notions one has held on to for years is even more difficult.
But the Universe has just told me to get it done already so I will.

What about you?
Is it hard for you to make room for new stuff, or does throwing out, sending to recycling, or even dismissing an idea from your mind come easily to you?


Yesterday was the first day of autumn and it felt like it.
I've always loved and appreciated the change of season. Each has its own charms and reminds us to be grateful for the weather we have because it is going to change whether we like it or not.
A wee bit of fall feeling hiding underneath a reasonably sunny day made me think of comfort food for colder weather.
I chose lamb and decided it was time to dust off my mental recipe file and see about making a one-pot meal, thus the above.
I am grateful for the change of seasons, the cooler weather, and the chance to make comfort foods to warm us and fill us.
#
Why the name?
Glad you asked!
It was the Harvest Supper in Fort Assiniboine circa 1968. Plenty of turkey and the trimmings and other foods as well, I think there were even cabbage rolls. I hope so because whoever made the cabbage rolls at those suppers was truly gifted.
One dish was a rice and tomato mixture. It may have had hamburger in it, too. I don't know because I didn't take any of it.
But Randy Brong did. He was a year ahead of me in school and right in my line of vision as I sat down to eat.
He'd taken the rice dish. He looked at his heaped plate, eyes focused on its deep red goodness, and said, "What is this...malarkey?"
From that day forward I associated the dish with the term.
When I started making one pot meals like the above I couldn't help myself: It's all malarkey to me.

This is down a side street in Old Tallinn.
I love the guided city tours. We see all we are supposed to see, but it's good to look around and see the other sights.

And I am grateful for every one of them.

Our anniversary was yesterday. Mike worked on his rental house.
I helped.
Later we went to dinner.
Life is good.

The above is Fort Assiniboine and it's where I'm from. Rather than show Main Street or the like this is the view of something new. Well, new to me anyway.
The emergency services building. It contains five units for rescue as the bush is quite popular during the summer long weekends.
Beyond it to the right is the school.
When I was in school there was a house in the field immediately west of the school. If it were in this pic it would obscure the school. West of that was field.
But places grow and times change and the old home hamlet has grown up around the back. 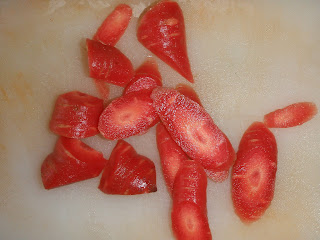 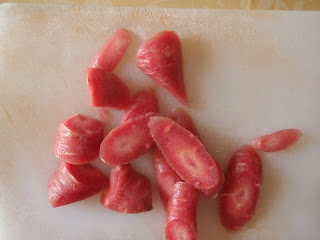 Atomic Red, that's what.
Further to the earlier seedy post this is what a red carrot looks like.
Younger versions of them still looked orange to me and I'd read that they turn red upon cooking.
I am pleased to tell you that I dug this out today and it was red as you please.

The above photo is with flash while the other is without. I posted one of each to show you it is not a trick of the light. It is real.

I barely recognized many of the people I saw back home in Fort Assinboine on Saturday, but many of them recognized me. That's just one of the many things for which I am grateful.
People who rode a particular school bus driven by a particular gentleman decided to have a bus kids reunion. The fellow, Clyde Evernden, drove from 1951 to the 1965/66 school year.
That's a lot of former kids. As the main organizer noted some of those former kids are gone.
He drove me for Gr. 1 and 2. That's 48 and 49 years ago and my excuse for having to look at name tags and then ask the bearers of those tags for further details.


Organizers opened up the reunion for other locals who wanted to drop in and visit. That was a grand thing to do and I am grateful for it.
I saw people I hadn't seen for decades. We ate. We talked. We laughed.
Someone organized horse and wagon rides for touring the hamlet. I went. I am glad.
A fellow I went to school with gave a fine commentary. He's on county council and the fire department and knows a great deal about the area. He's also the grandson of the above-noted bus driver. I hadn't known that until I asked him why he was there. In fairness I may have known once and forgotten, but that's as good as not knowing at all.
I spoke to the woman who taught me in Gr. 4 and a bit of Gr. 6. She told me I was sharp in those days and noted how I'd  come at things in a different way than others,  but I was right. It was good to hear and I am grateful for it.
It was a wonderful day and one of the finest reasons ever for a reunion.

It's a three hour drive from here to there and the same again back. It was long day, but a good one and for it I am grateful.

ETA: By popular demand here are the names of some of the people in the photo.
Front going clockwise Dorothy Utas, ?, Bob Janssen, Jean (Utas) Janssen.
Second row from left: ?, Dorene (Stauffer) Williams, Louise Borg Patrick.
Third row from left: Gary Davidson(?), Hilda Storseth Froese, not sure but possible her mother Florence Storseth.
Fourth row from left: Orriel (Olson)Vobeyda, not sure but could be Ruby(Olson) Schmaus or Avis(Olson). Far right between Dorene and Louise may be either Bev (Evernden) Kluin or Shirley (Evernden) Ashby.
In the kitchen on the left is Laurie (Graham) Budney.
If anyone can supply missing names or can correct my mistakes please do so and there's no need to be gentle about it.

The Case of the Confused Carrot

I was surprised to find the other day one of them had gone to seed.
Carrots are biennial. They aren't supposed to go to seed in their first year of life and I had no intention of keeping them around long enough for it to happen.

Bemusing as it is, I am tickled silly over it whilst husband is beside himself. He's always wanted carrot seeds from actual carrots as opposed to a package.

We don't know why it happened. It's near some parsley, also a biennial, that I left in from last year in order to get the seeds. Perhaps it gave the carrots the idea.

However it happened, it is there, it exists, and a few more of the carrots are setting seeds as well. We will collect them and see what we get next year.
Meanwhile,  we've eaten a few of the non-seedy ones. They are tasty though none of them have turned red on us yet.

Unions are the reason we have benefits and a decent wage.

Thank you to ever man, woman, and child labourer who stood up, and especially to those who died trying.