I grew up on a farm and it was pretty damned good. I am grateful for all I got to do and for the great memories of it.

Here's a poem that sorts it out better than a whole whack of description ever  could.
_____

I am an old woman now.
I sit in the sun
and I remember.

I remember how the sun felt on my face
when I was young.
It feels the same today.

I sat under trees
or in them.
I climbed on the combine
and jumped off into the waiting arms of nothing.

I hung from the swingset by my knees for a
fresher view of the world.
And I threw rocks in the creek.

I rode my bike
and sometimes took it apart for fun.
I slept in freshly ploughed dirt
and swam in mud puddles.

I am an old woman now.
I sit in the sun and remember.
And I smile.

Jocelyn is my middle name.  When I was very young we had a jersey cow that I named Jocelyn. Using the name for the poem served as an anchor.
Several years cousin Terry offered her internet circle the chance to name the new ranch calves and I had the honour of naming the above calf Jocelyn.

As for being an old woman, I am not even close. That's straight up poetic licence, that is.

We went for a drive to Jasper on Saturday. We left the house early, before 6:30 a.m., with the idea we'd see more wildlife that way.
We were not disappointed.
About 45 minutes into the trip we were treated to the sight of a young grizzly bear digging for roots in the ditch.
We took many photos and a few videos.
This video was done by my husband.
Enjoy. 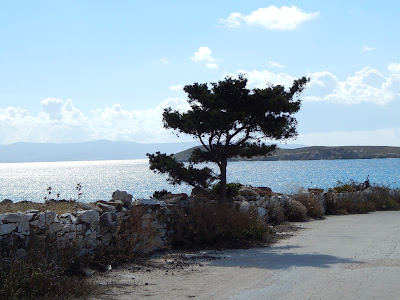 We took a morning walk on Paros and were treated to this sight.

Albertans went to the polls last week and turfed out the Progressive Conservative party. For this great change I am grateful.
The PCs had been in power since 1971. They were arrogant, greedy, wasteful, and had an honest belief --I am sure--that they governed by Divine Right.
The new premier completely, utterly and totally misread the public.
He introduced a budget that added taxes to regular folks while letting big business off the hook. He called an election one year before provincial law said he was supposed to.
He was condescending to the NDP leader during a debate. After misrepresenting what her party was going to do she corrected him. He then mansplained to her why she was wrong in correcting him and added, "I know math is difficult."
It all added up to the party being trounced and the NDPers getting a majority.
I didn't think the New Democratic Party would win. I am grateful to be wrong.
It's not so much that I am an NDPer, it's that I wanted solid change and that's the party to bring it.
It's going to be interesting here for quite some time.
I am grateful for that, too.

I get that people are scared of  stuffing a foot in their mouths and chowing down. I also get that one might not have a clue what to say to a person with cancer, or any other disease or infirmity that makes regular healthy humans want to turn tail and run.

I understand. I empathize.
Now get over it.
It could be you someday. If so, then what would you like your friends and family to do?

The above is harsh, but I don't care. Here's why:
I've had conversations with people who cannot respond be it properly or at all. I saw in their eyes and body language how happy they were I'd spoken with them anyway.

Back in the late 1980s I worked at the daily newspaper in Ft. St. John in northeastern B.C. Once a month I went to the seniors' lodge to take photos of the high games scorers in foosball (or something like it) for the month.
One fellow, Lee Olson, often won. He'd had a stroke that left his left arm useless at his side, but otherwise was physically okay. But it had affected a part of his brain leaving him able to carry on all kinds of conversations, but only with swear words.
He seemed like a warm, kind, happy man. Whenever he saw me he'd have a big smile on his face. He'd always come over to say hello with a long, drawn out,  "Aaaa, shit. Jesus Christ."
His face got crinkly, his eyes shone, and he would curse and cuss and swear all in a pleasant conversational tone.
On occasion I'd sit with him a moment. I asked a few questions. I assumed he was asking me some and used logic to determine what they might be.
In their own way the conversations were enjoyable and they were a great stretch  especially as I normally despise small talk.

It was good practice for later. Several years ago here in Rocky a woman who'd been in the air force with my mother during the Second World War war had a stroke or the like and was in the hospital.
I stopped in to see her one day. She was unable to talk, but her eyes lit up when she saw me. Her head moved and her mouth opened and I believe she was trying to talk.
I reasoned out the kinds of things she might want to know and told her.
She seemed happy and engaged in the conversation, and probably grateful for the visit.

If you don't know what to say to someone put yourself in their place and give it some thought.
What did you talk about before the disease? What would you want to hear?

Here a few ideas to get you started.

Hello.
How about those playoffs/footballers/ mud wrestlers?
Did you hear what____did?
Did you catch last night's episode of ___?
Let's go for a drive/walk/sit outside.
Up for a movie?
I'll take the kids for the day.
I'm here to look after things while you nap.
Can you eat? I brought chocolate/nachos/pizza.
You want peace and quiet? I'll see to it.
Everything at the office is going to hell without you.

In short have as normal a conversation as is possible under the given circumstances.

Vote For Change, Or Vote For a Change

Today is election day in Alberta. We'll get either a new, or a renewed, provincial government.
But whatever happens you have a say in it.
Who you vote for is your business.
We're allowed to not vote here so not voting is not a gesture of protest no matter how you try to tart it up to yourself.
If you are among the thousands who don't normally bother casting a ballot, do so this time.
Whether you are voting for change, or just voting for a change, get out and vote.

I have what I have come to call an interesting ear.
The auditory canal in my right ear is the wrong shape. Instead of a gentle curve it has some sharp angles. For as annoying as that can be I have to say I am grateful for it.
Here's why:
Because of this words get in, mix around, and come through far different from the innocent intentions of the speaker.
For example, back in the eighties I was walking though the downtown Edmonton Hudson's Bay Store on my way back to work.  The store had the radio on to a station that offered a contest with a chance to win one of ten Air Canada trips to the Neutral Zone.

A few years later there was a devastating hurricane on a Caribbean Island. Donations were coming in from all over and I heard it announced on the radio that Edmonton had been so generous it was sending its own planeload.
I shook my head. I could not for the life understand what possible good a planeload of Dalmatians was going to be.

One of my early hearing hits happened in 1969 in Grimshaw, in Northern Alberta. It was July,  family reunion time. Cousin Wayne, whose family hosted that year, our cousin Becky, and  I went to the tunnels for a Sunday morning smoke. The tunnels ran at an angle under a street near the downtown, were at least five feet high,  and came complete with a bit of mud and wet and rocks. One side opened near a church.
We were busy lighting up when Wayne said, "There's the Pastor."
It fell on my right ear and I asked, "Bastard? What bastard?"

Over the years I've adjusted and even though I hear odd things still, they rarely match the fun I had when the ear canal was young. Until Saturday when my husband saw goji berries in Superstore and asked if I wanted any grouchy faeries.

Well, if can pack them in a plane full of Dalmatians headed to the Neutral Zone, why not? But we'll need to be careful. I've heard they can be real bastards.

It's Kevadpuha*, that is Spring Day, in Estonia. In honour of it the above is a photo taken in a church yard there two years ago.
__
* The "u" in Kevadpuha requires umlauts.