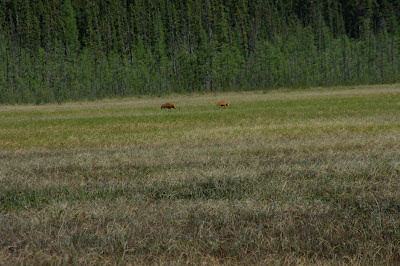 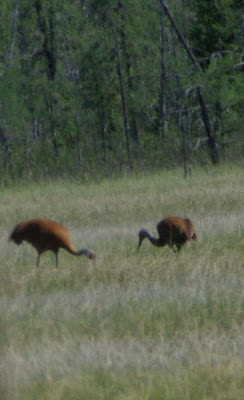 We are blessed to have sandhill cranes around here.
They can be found in fields in the late afternoon.
One evening a few years ago my husband and I went for an evening bike ride and saw two of them dancing in a small stream. Whether it was a mating dance or something else I may never know, but it was a beautiful sight.
There are two spots, both near local lakes, where it is almost a given we'll see them.
I found two of them feeding the other morning when I went out to Twin Lakes to check what was blooming.
They stayed well back from the road so this was the best my lens could do.
I took more than 30 photos of them. I cropped and blew up the second pic as much as I dared.
Posted by Leah J. Utas at 3:49 AM 14 comments: 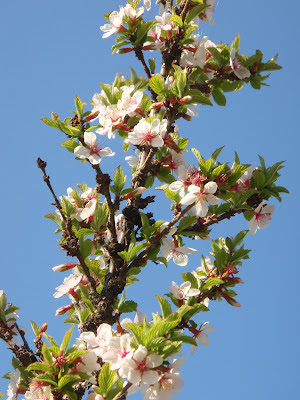 Spring is blooming.
The nanking cherries are blossoming in the front while the crabapple trees are starting to flower.
The pine siskins are back and loud and happy. My early mornings are filled with songs of wrens, swallows, robins, chickadees, sparrows, the occasional call of the red wing blackbird, a flicker from time to time, and a nesting pair of merlins across the street.
The world is living and vibrant and full of promise.
I can sit outside in the front and enjoy full sun in the afternoon, or rest on the back porch at sunrise with my coffee and the feathered symphony.
For all of this and more I am grateful. 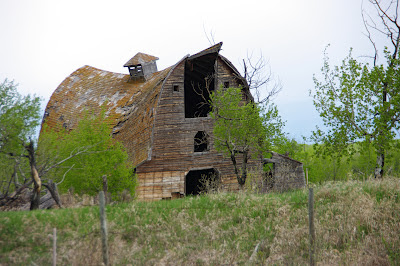 We saw this old barn south of Livelong, Saskatchewan last weekend.
It had such character that I had to stop and take its photo.
The barn, servant of a prairie farm, sat on a green hill by a road left to weather the wind and storms and to take in what sun it could get.
Whatever it did, however long it was a working entity, is long lost to the dust. Today it takes the rest it earned during its working life as it slowly surrenders to the soil.

Hilary at The Smitten Image  made the above one of these: 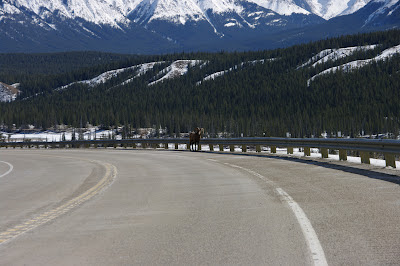 If you ever want to see mountain sheep come to the West County.
We usually see them in a spot along Abraham Lake, but like this fine fellow, they can be anywhere in the mountains along Highway 11.
Sheep like the company of their own kind. There's another one a bit lower on curve and behind the fence.
Posted by Leah J. Utas at 6:23 AM 9 comments:


We had our Christmas with our friends Bob and Sylvia over the weekend.
It was our latest observance yet, but between commitments and vacations, this was the first opportunity.
We pounced on it.
We had roasted turkey with all the usual suspects Saturday night including German Red Cabbage made by Sylvia.
Sunday was a beautiful spring day. We threw together a picnic with the turkey leftovers and other goodies and went to the National Historic Site.
We walked the trails and down by the river enjoying the sun, the park, the birds, and the company. It was a perfect day and for it, and the Christmas weekend, I am grateful. 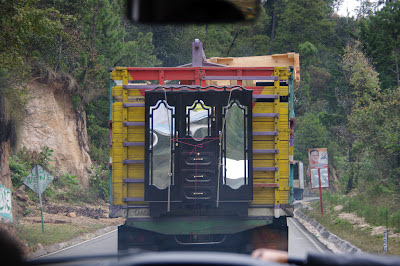 I took this out the bus window during our trip to Guatemala.

You work with what you have. The roads are rough. This must have been more secure that it appeared.

I may be stretching the definition of bureau.

Coke debuted today back in 1886. It's inventor brought a jug of the syrup into a pharmacy on this day in and into history.
It was meant as a medicine and I can assure you from personal experience, it does the trick.
I drink Coke (R, TM, whatever) whenever I travel. I don't get sick.
The exception was in Cuba in 2010 when I drank the local knockoff "Tukola."
It tastes the way Coke did back in the heady days when cane syrup instead of the miserable high fructose corn syrup was the sweetener. (In Canada look for glucose-fructose on labels. It's Canadaspeak for HFCS.) I will not make that mistake again.

My husband used to get sick when we traveled. Our guide in Egypt last year advised the consumption of Coke or Ouzo to ward off travel illness. He tried it. It worked. He is a convert.

Thank you, Dr. John Pemberton, for mixing caffeine and coca leaves with other ingredients and giving the world Coca-Cola (R, TM, whatever).

Gratitude Monday - Have I Mentioned I'm a Fringe Fan?

I am grateful for plenty of stuff specific to ComicCon in Calgary including a panel on Saturday. It featured John Noble and Jasika Nicole from my favourite show Fringe. 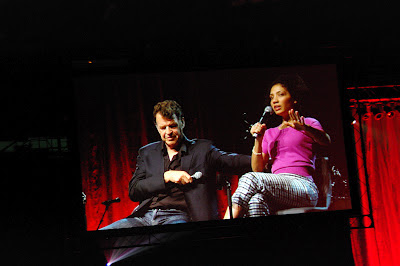 Noble is Australian. It is a treat to hear him speak as he was born to do. He does a fine American accent, but Australian English is my favourite.

They were entertaining, funny, and gave every appearance of having a warm, friendly relationship off camera.

It was McHappy Day on Wednesday, the day $1 from every Big Mac, Happy Meal and hot McCafe whatever goes to help kids.
Good for it.
But did you ever wonder why we have Happy Meals?

In the mid-1970's a woman in Guatemala City came up with the "Menu Ronald," the precursor to today's Happy Meal.
It's changed a bit over the years including recent tweaks allowing for less fries or apple slices as part of the deal.

We passed the sacred spot twice during our trip to Guatemala. I did my best to get a pic of it as we passed.

It was a wonderful evening.
My friend and I went to Star Trek:TNG  reunion in Calgary on Saturday.  It was so cool to see the cast together after all this time, and to be surprised.
1.They all look good under the lights.
2. It was entertaining, especially Marina Sirtis who is hilarious.
3.Wil Wheaton is warm, engaging, funny, and intelligent.
4.They are performers and the evening was a performance.  No one would ever leave an event of this magnitude to chance.
5.The audience was surprised to have John de Lancie, "Q" on the show, join the cast after an in character entrance.

Wheaton said he regretted leaving the show at 18 but thought it was a good career move.  He was reluctant to visit the set afterward and at one point thought he didn't have the right to invite the cast to his wedding. It brought tears and reassurances from the cast. LeVar Burton noted, "I ....ing never liked you." He also agreed that Wheaton had been a pain in the ass, but "you were our pain in in the ass."

Denise Crosby didn't say much and neither did Michael Dorn. Sirtis spoke up a few times, Brent Spiner did as well and Gates McFadden did on occasion. Most of the time it was Sir Patrick, or Frakes, or Wheaton.

In a question about the Captain's enemies Sir Patrick named a Ferengi. Right on cue "Q" walked up through the audience bearing flowers.

It was good to see him and kudos to the organizers for keeping it quiet. But please don't insult my intelligence by telling me the  TNGers didn't know.
It was too pat, too perfect, too well-rehearsed to be anything but a performance. But it was fun, and that is what mattered.

Sylvia and I had seats toward the back 15 rows up. The big screens helped us to see what was going on. I am happy I have a good camera that allowed me to get good shots on the stage, and I am so very happy that I had the sense to set the ISO at the maximum setting.

About 5,000 people attended, some from out of the country. This was good.
But the organizers risked the wrath of many by saying it would start at 7 p.m. when it didn't start until 7:30  and even then, it didn't actually start.
We waited from 7 p.m.
A band played.
Some fellow took one hell of a chance and proposed. Fortunately for him she said yes.
When the program started Emily Expo, ComicCon mascot, came out and spoke for a bit, thanking various sponsors. Marvin Rush, a Star Trek director of photography, talked about how we're living in a Star Trek age.
Garrett Wang, Ensign Harry Kim, on Star Trek Voyageur talked about not liking TNG because every time he tried to watch an episode it was the not only the same one, but it was the lamest episode of TNG. Because he didn't watch it he wasn't nervous when he read for the part.
Then we were "treated" to an 18 minute video with assorted stars talking about what ST meant to them. It wasn't very entertaining and all it did was annoy me. If they were trying to whip us up into a frenzy with this nonsense they failed.
Then, just when we thought it was going to get going, Emily Expo announced a 30 minute break.
But we survived the wait and the stars came out and I am glad I was there.