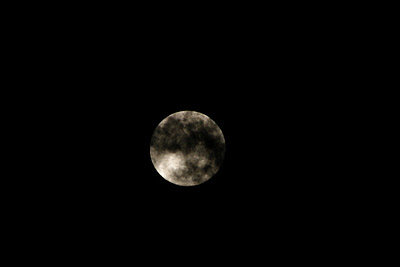 I'm grateful for a great deal of things today including the opportunity to post this picture I shot of the moon  and the societal directive to eat candy.
Why fight it?

Happy All Hallows Even everyone.
Posted by Leah J. Utas at 3:33 AM 15 comments:

Photo-Finish Friday -- Life Along the Nile 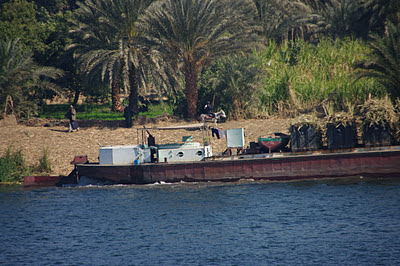 A typical scene we saw as we floated along the Nile.
Posted by Leah J. Utas at 4:00 AM 14 comments:

It's Monday again. That poor day is the source of myriad complaints throughout this land and others where it marks the start of the work week.
Get over it.
Harsh, maybe, but you are here, awake, reading, and therefore you are alive. Any day you're alive is another day to be enjoyed whether you like it or not. You can choose to complain, whine, moan, and generally live in the dark, or you can see the day for what it is: a chance to enjoy life, even a little thing about it, or change what you don't like.
I say there's something good in every day, even if that good is only the basic fact that I am here and can do something about my circumstances.
At the very least, flip things over. Instead of whining about something find something in your life that you are happy about. Even a simple thing like having a cup of coffee you can call your own.
Seriously, stop whinging and start thanking.
I can complain as well as anyone. In fact, it feels good sometimes. But if it's all you do, then it's all you'll find in your life to do and frankly, it's annoying as hell.
It's Monday, a new day in a new work week, be it literally or psychologically.
Say thanks and get on with it.
Does this sound harsh?
Good.
Because sometimes that's what it takes.
Happy Monday. I am grateful that you are here and that you read the above.
And yes, I do see the irony in complaining about complaining and I'm grateful that I do.

Photo-Finish Friday -- The Moon and the Mountainside 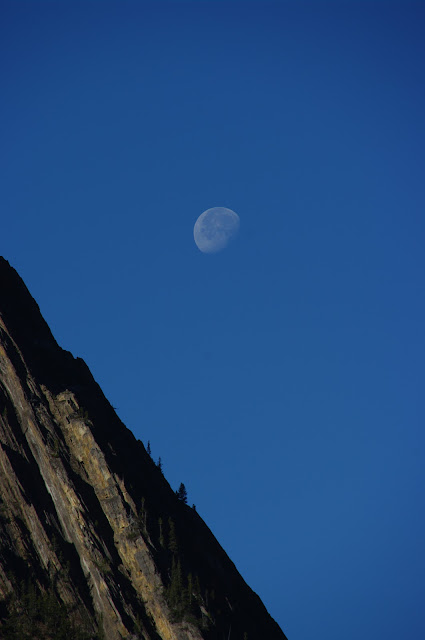 The moon in the daytime against the mountainside offers an otherworldly cast to this scene found along the Jasper-Banff Highway.
Posted by Leah J. Utas at 1:02 AM 15 comments: 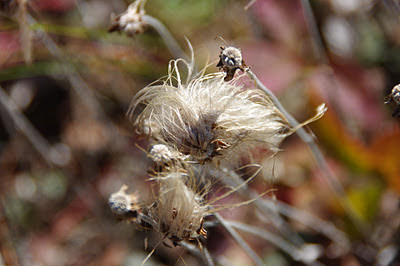 We found this lively character along the Jasper-Banff Highway during our Sunday drive.
By day it's a mountain dryad, probably a yellow one.
It looks like something Seussian which makes me wonder what it gets up to when no one's around.
Posted by Leah J. Utas at 3:03 PM 21 comments: 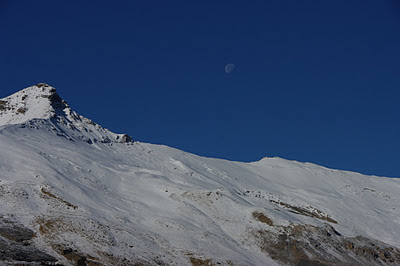 Yesterday Mike and I went for a drive north on the Columbia Icefields Parkway (aka the Jasper-Banff Highway) to Jasper. It's about four hours of steady driving, but few drive that highway without stopping.
Being off-season, there was hardly any traffic. This makes it easier to stop for scenic views.
The only wildlife we saw were a few whiskey jacks (gray jays) but that's fine. It's their off-season, too.
We had lunch in Jasper, walked a bit, went to the rock and jade store and came out both richer and poorer, and made our way home.
I am grateful for the day, for being within driving distance of Jasper, of being two hours away from the Banff Park Boundary and the parkway, and I am grateful for the time spent with my husband.
Posted by Leah J. Utas at 6:00 AM 16 comments:

Photo - Finish Friday -- Around the Bend 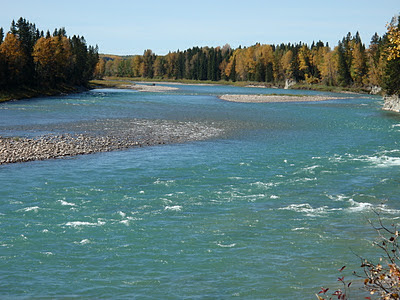 Gratitude Monday -- How It Started

I got the idea for Gratitude Monday after I did this post back in 2007. I'm repeating it here because it's October 10 and Thanksgiving again.

Thinking about this day and how I was behind the Iron Curtain-- briefly and at an airport-- set me on the course for being grateful for what I've got here every Monday.
Let the record show, I don't restrict gratitude to one day a week. I restrict talking about it publicly on my blog to one day a week.
I don't think I noted it in this post, but I am also grateful to have been in an Iron Curtain country though being at an airport isn't even an appetizer.
Without further ado:

It’s Thanksgiving Day in Canada today. I’ve got many things for which to be thankful, roof over my head, safe food and water, friends, love, something to do (writing) that makes me want to get out of bed each day.

Generally, most of us would agree that we’ve got a lot to be grateful for.
For example, if you’re reading this, then you are educated enough to be able to read, you know how to use a computer, and you have access to one right now.
If you can’t think of anything else to be happy about today at least you can chew on those three points with your turkey.

I’m grateful to live in a country where it’s okay to talk to strangers.
Granted, it may not always be safe, but at least you can’t get arrested for it.

That wasn’t the case in Bulgaria. Back in 1983 I was flying between Greece and Italy on the cheapest flight available, Balkan Bulgarian Airlines. The flight was Monday, October 10, and it included an eight-hour layover at the airport in Sofia, Bulgaria.
The in transit area of the airport had seating, washrooms, food, and a free English-language magazine. I still have it some place, I think. The lead story was about the Young Journalists and they came off sounding rather feisty. Another story was about a National who’d been charged in connection with the attempted assassination of the Pope two years earlier.
“A Bulgarian trying to kill the Pope!” scoffed the story. It turned out the magazine was correct to scoff.

Some information I found somewhere in the airport said travelers could take a bus into the city. I considered it, thinking, as a naïve traveler, that if I got lost I could just ask a local how to get back to the airport. I might have to do it by gestures, but it could be done.

But I stayed at the airport. I read, gazed at some mountains (if you add the appropriate vegetation it looks just like the scenery out of Honolulu airport), drank a cup of coffee that held the record as worst cup ever for four stellar years, and marveled at the fact that I was behind the Iron Curtain on Thanksgiving.

I was quite grateful to be Canadian. I was also very grateful to have some different currencies on me as the concession didn’t accept the Drachma.
And I was especially grateful that I stayed at the airport as I found out later that ordinary Bulgarians were not allowed to talk to Internationals.
Had I gone out and gotten lost I might have had quite the adventure.

How about you? What interesting or unusual thing are you thankful for today?

Happy Thanksgiving.
***
Things have changed so much. The Iron Curtain is gone. So  is the Drachma. Today I am all the more grateful for having had the experience.
Posted by Leah J. Utas at 2:37 AM 10 comments: 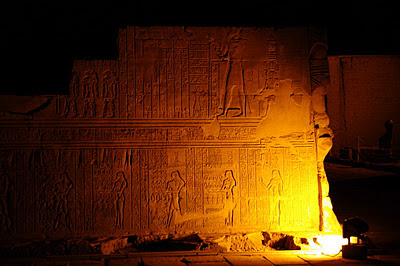 Kom Ombo is the only temple in Egypt dedicated to two gods.
Above, this side honors the crocodile headed Sobek. Crocodiles were once housed in the temple.
The other side of the temple is dedicated to Horus the Elder.
Posted by Leah J. Utas at 3:17 AM 8 comments:

Yesterday one of my husband's friends came by and winterized our RPOD for us.
My husband is away working. He'll be home briefly on Friday to take said RPOD in for a safety recall to put some lights on it.  It'll stay at the shop for a week or two until he can get back in to Red Deer to collect it.
I did what I could to the trailer, but I have neither the physical strength nor the right wrench to open the hot water valve, and neither do I know how to pump anti-freeze through the pipes.
The friend stopped by and took care of it in about 10 minutes. I watched, I fetched, I tried to learn, and I am very grateful.
Posted by Leah J. Utas at 1:52 AM 14 comments: