My husband decided to try his hand at carving amber.

The following hedgehog is his first creation and I think it is fabulous. 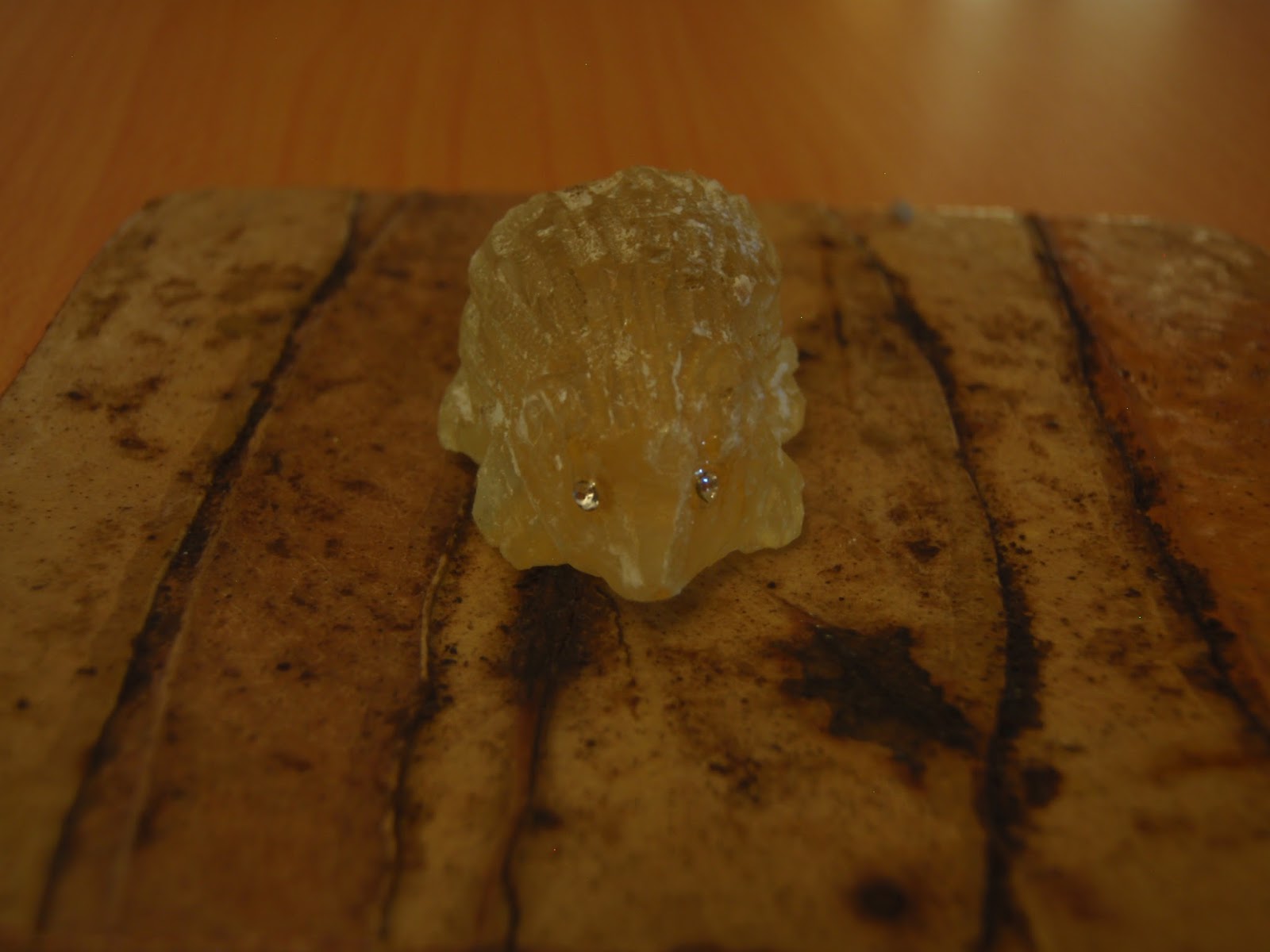 The eyes are from the stones in an earring he found a few years ago and could be glass, quartz, or rhinestone.
My photo does not do the eyes justice.
The stones make the hedgehog look positively evil.
That, too, is fabulous.
Posted by Leah J. Utas at 5:51 AM 7 comments:

Mike and I were in Egypt in 2011.
We had a tour of the country and arrived back in Cairo  January 28 to scenes of riot police, tear gas, marches, and smoke.
Here are some photographs Mike took on what is now known as the  Friday of Anger.

Gratitude Monday -- A Lovely Spring Day in the Winter.

Yesterday's temperature was in the mid plus teens. It was warm and melty and the sun was bright.
It was a spring preview.  I love those days and am very grateful for them.
I went for a walk and came back to chickadees circling the empty feeder.
I fed them soon afterward and they hardly cursed me at all.
I'm grateful for that, too.

The most beautiful lie is ugly.
The ugliest truth is beautiful.


Saturday was a marvelous winter day. The kind of day that doesn't seem much like winter at all, but for the snow.
It was warm. It was bright. It was fresh. It was beautiful.
Those are the best days, and for them I am grateful. 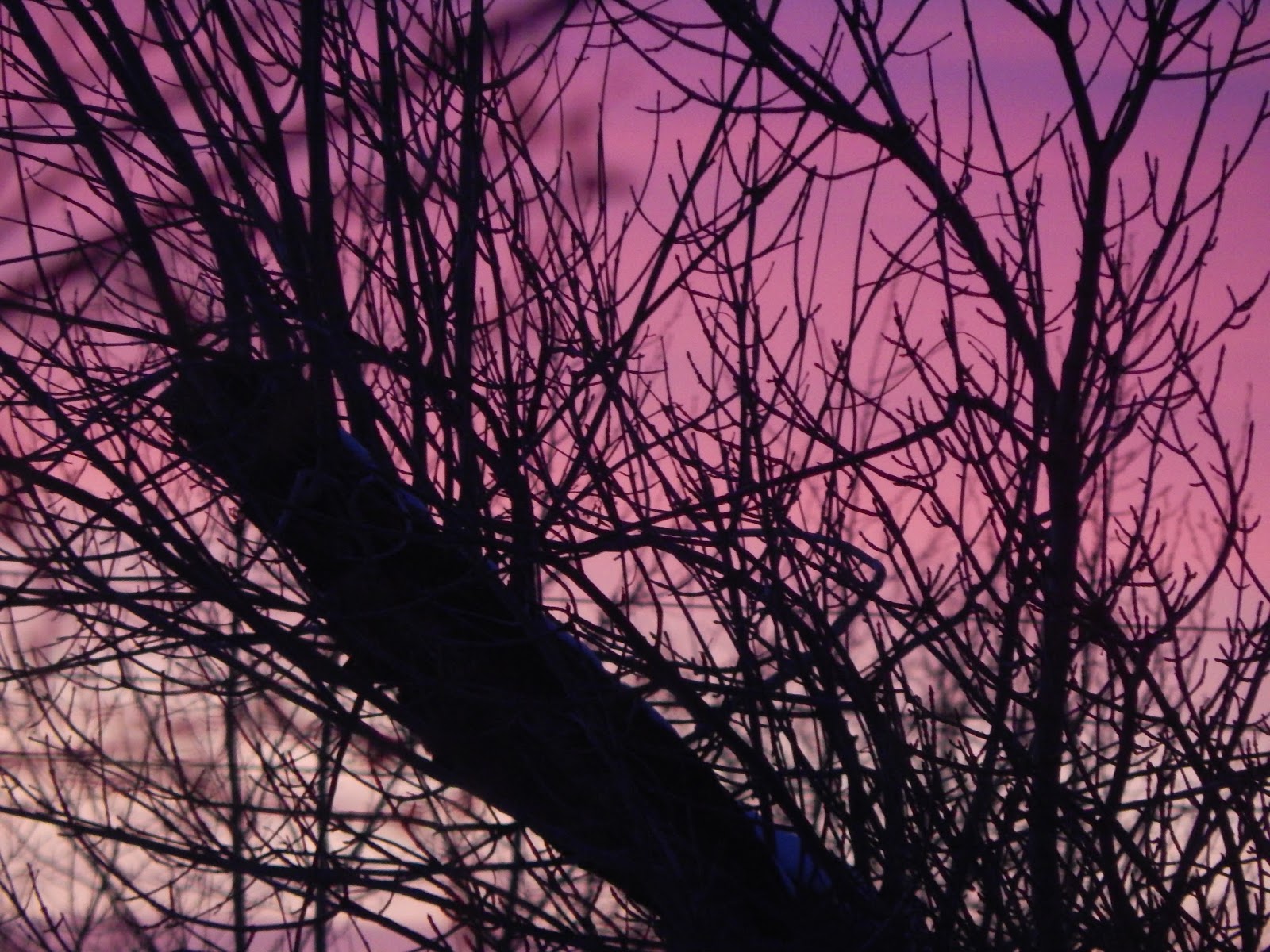 It's getting later every day as we head inexorably toward the spring.
Posted by Leah J. Utas at 1:00 AM 8 comments:

Ginger root is wonderful.
Many of us know it as a spice in everything from gingerbread to gingerale to curries.  Its properties as a stomach settler are also well-known.
But how many of us know it is good for clearing bruises?
And in addition, I think it may even help prevent them. My reason for thinking this is anecdotal, but it is still a reason.

Here's my thinking on the matter:
A few months ago I was bitten by a Rottweiler and it made one hell of a bruise on my thigh.  From mid-point to the edge in any direction the purple and red stretched for at least two inches.
From lifelong experience I knew it would be a long lasting decoration.  In Australia in 1999 I rode a camel for an hour and it left bruise on my leg from knee to upper thigh that lasted three months.  I figured the dog bite was good for several weeks.
But my husband suggested rubbing essential oil of ginger on it twice daily. He'd used it on a bruise and spoke from experience.
So I did.
Within 24 hours it had faded substantially.
In less than three days it was gone.
I am most grateful for it.

As to prevention,  I add a chunk of fresh ginger root to my morning smoothie and have done so for several months.
While I am klutzy as ever --I can trip over air-- I do not have any bruises.
This is new as until a few months ago I could find at least one bruise on a leg no matter when I looked.
I noticed when I was seven that I bruised easily and it seemed I always had a bruise. So I kept track. I can tell you, no exaggeration, that from the time I started keeping track in the late spring of the year I was seven I have always had a bruise on a leg.
Now I don't.
I take daily low dose ASA.  I should bruise even easier.
It's not happening, and for that I am grateful.
*
NB I haven't found any supporting evidence for this anywhere. It's based on my own experience and will not necessarily yield the same result for anyone else.
But what the hell. Try it if you like. And if it doesn't work for you, then you still get to eat ginger.
*
ETA: I know all my readers are smart, discerning people, but just for clarity's sake, do not ingest the essential oil.

Photo-Finish Friday -- A Village on Naxos 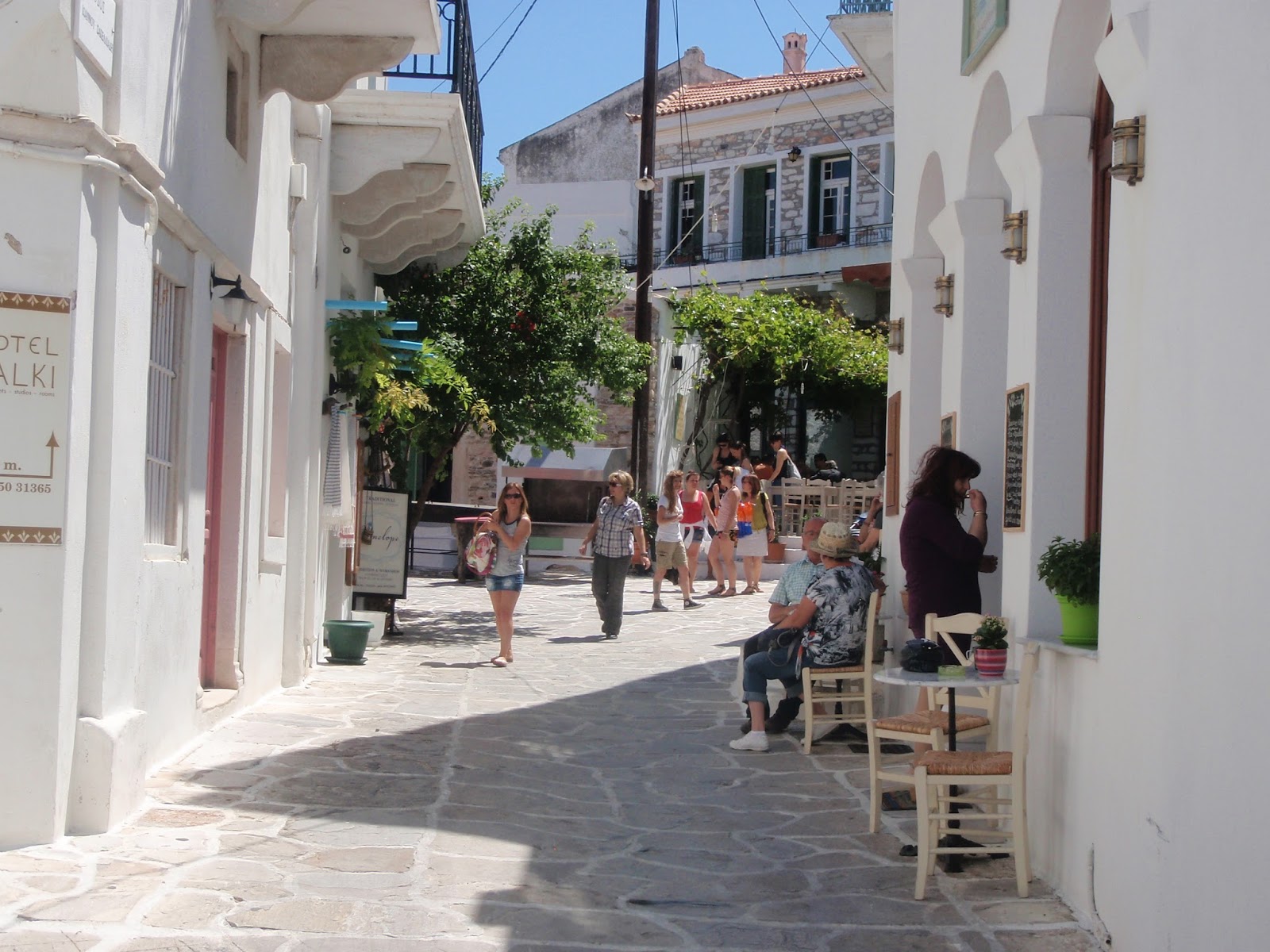 Halki, Naxos.
Looking toward the square of and the oldest market on Naxos.

I had an idea recently for bean pizza. I wanted pizza, but nothing too heavy. I went looking and discovered that yes, bean pizza does exist in the wild.
This was good as it gave me a solid basis to ignore when I made my own.
Also, I wanted to know if Robin Hood Gluten Free flour was good for pizza crust.
It is the best.
The first one I tried was kale and kidney bean with two kinds of goat cheese.
It was very good.
For Christmas I made baked bean pizza with bacon and mushroom.
We only stopped eating it because it was gone.
My husband loves these pizzas even more than I do and for that I am grateful.
Yesterday I decided to make another version of the kale and kidney bean. I used regular dairy mozzarella and some honey goat cheese on it along with mushroom, onion, and bell peppers.
I am grateful it turned out so well. It is filling and healthy and fun to make and I am grateful for that, too.

I am sure you are curious.
This is kale and kidney bean beanizza: 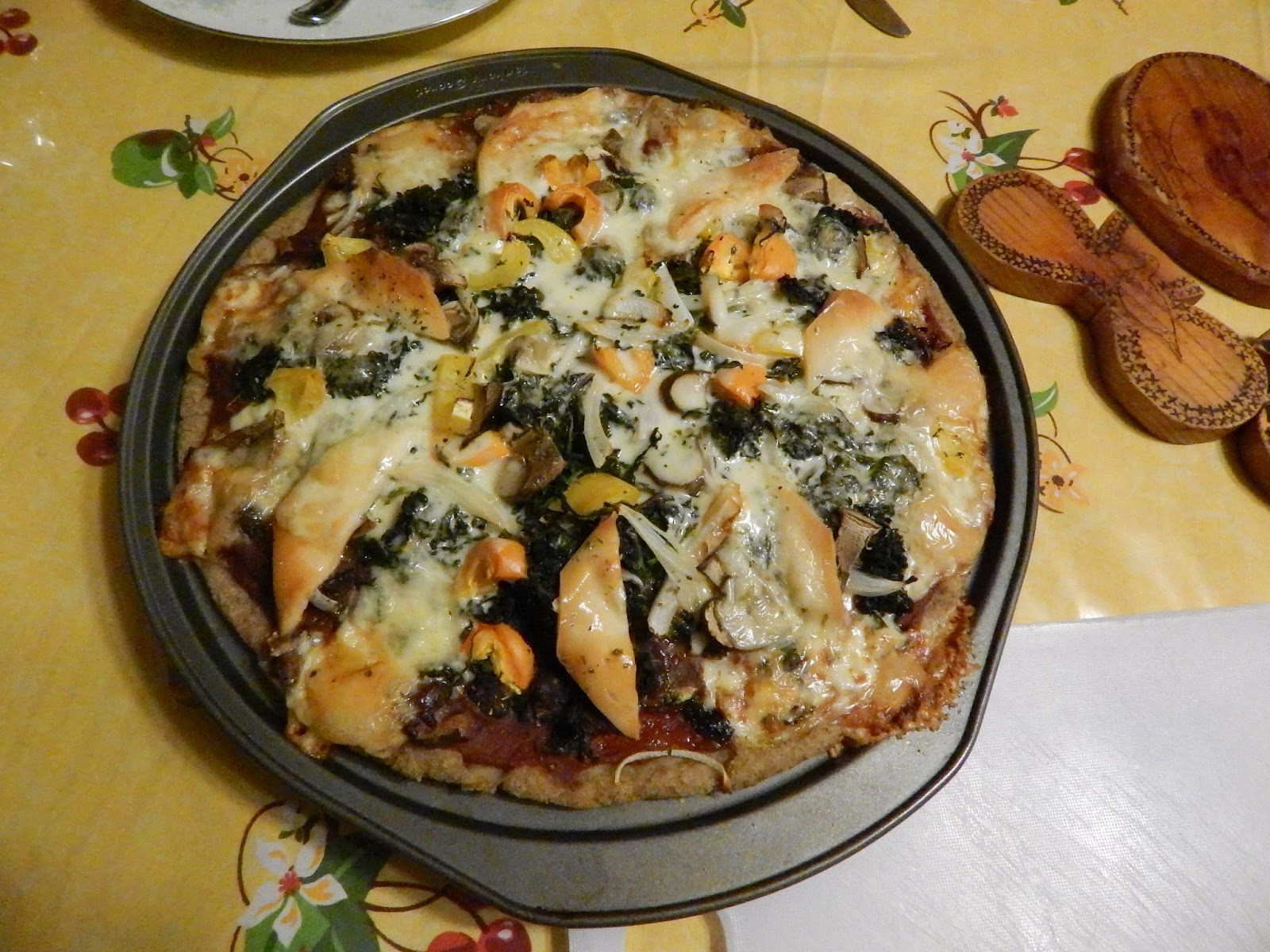 It is going to be a fabulous 2015  because I intend to follow the advice given me by my dragon guide, Rumbelfyre,  around my birthday a few weeks ago:
"Nurture your horns."

He explained that a dragon's horns its unique expression. They announce who that dragon is and reflect what he or she does.
The human application is simple, follow your dreams, desires, wants, wishes, call it what you like. But follow the urge to create, express, be, and do, and do it in the way unique to you.
Nurture you.

Good or bad does not matter. They are in many ways artificial standards.  If is is right for you and executed in the way best to you, done to the best of your abilities at the time it is done, then it is good.
What anyone else thinks about it is not your concern.

This is in general, of course. If it is how you want to make a living, then get good at it and exploit a market, even if you create that market yourself. The standard may still be artificial, but it's the one you have to hit in order to make a living.

I'll be nurturing my horns this year through drawing, writing, photography, playing with my food, and whatever else comes to mind, because nurturing one's horns is fabulous.