I have learned what some of my rocks and crystals do and for it I am grateful.
Recently I got a free ebook published by Hay House: Crystals: How to Use Crystals and Their Energy to Enhance Your Life, by Judy Hall (Hay House Basics, 2015) and learned a great deal.
It made me get up, collect every rock I had, and set them outside in the rain to cleanse.
After they dried I put most of them away to rest. They'd been out for years collecting energy and not getting my proper attention.
Among the few I left out is a large single point clear quartz that came to me more than 20 years ago.
I found it in the gutter one day. It glistened in the late morning sun. It had two lengths of yarn wrapped around it, one light blue, the other a pinkish purple. Logically, someone had been wearing it.
The Mountaineer had a lost and found in those days so I left it at the front desk and went to my cubicle.
After a week no one claimed it.
I didn't want it so I  took it across the street to where my inlaws had an alternative therapy clinic and my husband ran a health food store. My MIL put it in a glass carrier with some other crystals, most of them quartz.
It stayed there about two months. Eventually she convinced me that the crystal wanted me so I took it.
Over the years I used it from time to time and often took it in my suitcase when we travelled, but at no point did I even ask it what it could do for me.
I have channeled a rocks consciousness in the past, but it seemed like an effort and I got away from it.
Through the book I learned how to ask.
This quartz is a memory crystal. It showed me a series of images from my life. Most of these were scenes from when I was very young though some were from my teens. It went beyond seeing. I relived them, felt what I felt at the moment it happened.
It was wonderful.
I am grateful for it and am looking forward to what else it, and the others show me.

The seasons are changing and for it I am grateful. The differences make for obvious markers as time continues along its path.
Fall is a few days away and the leaves are getting ready to go out in a blaze of colour.
If one must change, then do so with style. 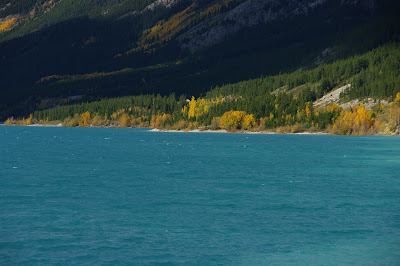 On Saturday we slept in until a bit after 8 a.m.  It's good to do that now and again and I am grateful we had the chance to do it.

We have an abundance of homegrown tomatoes courtesy my in-laws. They are tasty, and that is good. They can go into so many things and lately, they have: corn and tomato salads often with zucchini, too; a potato and tomato casserole; something similar but with zucchini  rather than spud; an egg, cheese, and bread casserole from a batch of bread that did not work out; lazy cabbage rolls that took care of a bit of leftover meatloaf; tomato soup; and the most magnificent Greek salads of the year.

The cooler, overcast weather is not good for farmers, but for writers like me it's not so bad. It has helped me think about my current WIP. It's off in a new direction from the original, and that's good, too.

Life is good. Sometimes the good is obvious. Other times one need only look at a different angle to find it.

Today I am very grateful that my husband and so many other workers have the day off.

I am grateful for the people who fought for the five day week, lunch hours and coffee breaks, holidays, safe working conditions, fair wages, and everything else we take for granted now when we go to work.

I benefit today, as do so many others. I am grateful for it and I hope we never lose sight of how we got here.