Lead Me Into Forgiveness

I finally get why being a leader upsets me.
Here's a bit of background:
Years go, I was maybe 12 at a family reunion on mom's side. There was a keg.
I helped myself, as so many others did.
At one point several other children lined up behind me.
I neither called them nor wanted them. For the record I did not entice them to the keg in any way.
But to hear a cousin's wife tell it, all the little children were lined up behind me. The clear implication being I deliberately led them into temptation and proceeded to provide it.
(Sidebar: Fuck you, Judy. I always liked you. Still do, but fuck you, Judy.)
This upset me.
I swore I didn't bring them along. They lined up of their own free will
I screamed inside, "I'm not a leader."

I can't stop anyone from following me to a keg, or down the street, or into a set of beliefs.  It's personal choice. But I resented the implication that I'd done it deliberately.
I realized over the years it was more than simple resentment.
The idea of leading scared me.
Being first in line is fine, but I do not lead. I do not want the responsibility.
Lately I have been wondering why. On Monday I got the answer.
During my meditation I asked what was holding my career back. According to  LeahWorld I should long have been a published author.

The scene from a past life flowed into my mind. I am familiar with this life as I have been regressed to it a few times.
My name was Erich von Stronn.*  I was a young soldier of the German army.  I led a small unit of men. We were ambushed. Some were killed. I was captured and tortured and left to die in the cold in the square in a Russian town.

Some of the men of the unit are in my life today. One despises me. I am sure he blames me for his death.
Another is a long-time friend. He has told me he does not blame me.
The other I have know for close to 50 years. She and I are friends, but time and distance has kept us apart.
It was she who betrayed us.
In our life now she is the only person who ever told me a secret that I later spilled. By later I mean the first chance I got.
I always wondered why I did that. It is out of character for me to say the least.

How this shakes out in my writing career I don't know. There may be a whole new component to my career now, one I can't imagine at this moment.
Whatever it is I am open to it. I can lead if it is what I am supposed to do.
And no one is going to die because of it.
__

*Best guess at the spelling. A friend originally suggested it would be spelled Strahn. During the regression where I got the name the version I used upstream came to me.

According to my surgeon, my body is completely recovered from the July 2014 cancer surgery.
This is good and for it I am grateful.
The CT scan showed no cancer anywhere and the CEA (blood test) was normal.
Both are good and for both results I am grateful.
I 'll continue with the blood tests every three months for a while yet and I need another CT scan next year. That's fine with me.
Best news is I don't need another colonscopy until 2018. Gratitude doesn't even scratch the surface of how I feel about that.

As to the title of this post, well, I no longer have cancer so calling it a cancer update is a misnomer.
Medical science refuses to call me cancer free. There's a five year wait for that.
I've been uncancered.
I remain uncancered.
It's maybe not the best word for it, but it fits.
I'll use it until I come up with something better or I get to call me officially cancer free.

Photo-Finish Friday -- Better Than it Looks

This dish is specific to Khiva, Uzbekistan.
It's dilled noodles with lamb.  It is very good.
It really doesn't present well, but if you are ever there, have it. 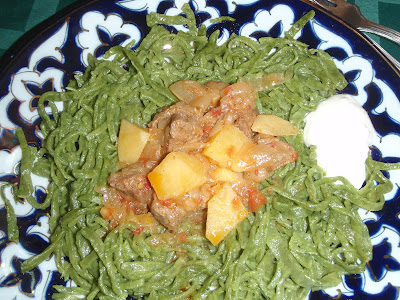 Gratitude Monday --Back From Uzbekistan Edition

I am so grateful to report that I finally got to see Tashkent, Samarkand, and part of the Silk Road.
I've wanted to go there for more than 30 years. Back in the eighties I read a travel magazine looking for places to visit and when I read about the Silk Road my heartbeat zipped up and nearly pounded through my chest.
This was a signal. It meant it was a place I needed to see. it's likely I had a past life, or part of one, there.
I got no obvious signal while there and that's okay. It isn't necessary.
What's important is I got to go to Uzbekistan and for it I am grateful.