Photo-Finish Friday --Remembrance of Springs Past 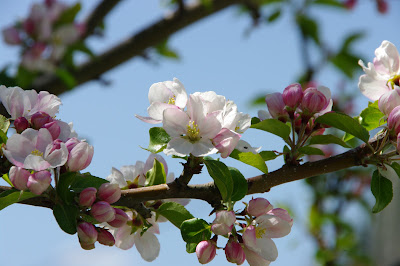 Crabapple blossoms to brighten up the end of summer.
Posted by Leah J. Utas at 12:30 AM 13 comments:

Still here casting my reflection on the world. 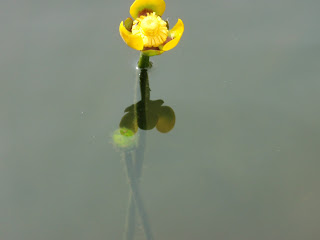 It's good to bring things down to their most basic level at times.
This week I note  as the summer winds down  I am here to enjoy it.
I have good health, good people in my life, and a good life.
For that I am grateful.


Some days one simply needs to see a young, fuzzy penguin.
Posted by Leah J. Utas at 1:00 AM 8 comments:

The Royal Canadian Legion in Cranbrook B.C.  has apologized for an appalling joke it had in its August newsletter.
For those not wishing to follow the links the joke concerned itself with the killing of First Nations persons.
Two men are out hunting. A First Nations man runs by and is shot by one hunter. The shooter assures his companion, who is from out of province, that's it's legal to do that where they are.
Later, the visiting hunter takes out some beer. A First Nations man comes by, grabs a beer, and runs. The visiting hunter shoots him.
He's arrested. He protests that it's legal. The RCMP advises him that it is not legal to use bait.

The Legion members did not seem to get why there was a complaint. The point was made that one person complained thus making it sound like somebody's just got thin skin.
This belief is perpetuated by a quote from that Legion's president who suggested that some people can't take a joke.
Just so we're clear: Killing is wrong.

Hmm, let's take that joke and swap out the ethnicities, okay?
How about white men in the southern US as our hunters, and black men as the targets? And just to make it even more fun and keep with the stereotype in the original joke, let's call the bait watermelon.
Still a knee-slapper, Cranbrook Legion folk?

Legion members fought in several wars so that we could have our freedom, including the freedom to say pretty much what we want when we want to.
Cool. I am grateful for it.

We have a right to find funny what we find funny.
Cool. I'm grateful for that, too.

Did the Cranbrook Legion members who put in the joke, okayed the joke, and read the joke think it was okay?
It would seem so.

But what I really want to know, Cranbrook Legion members, is why, when so many of you fought in at least one war where the leaders of an ethnic group set about exterminating another ethnic group that they considered less than human, would you laugh at a joke that does the same thing?

It's that time of year again. Harvest is nearing. Many garden vegetables are ready to eat now and they are very tasty.
A bit of patience will yield a bigger harvest, and I will be leaving some in the ground, but there's no point depriving myself and my husband of tender, sweet carrots.
The yellow beans have been producing like mad. I lost many of them to an early season hailstorm. Those that survived are doing their best to make up for the loss.
The potatoes in the photo are courtesy my FIL. He's been supplying us with tomatoes, green beans, and carrots. 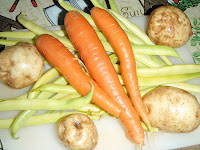 I am grateful for a great many things this week, but if I had to pick one I'd say it is the taste of a carrot, barely washed and straight from the dirt. 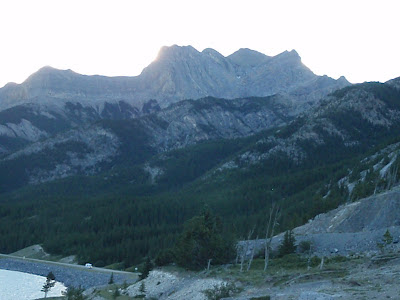 The sun sets behind a mountain at Windy Point along the David Thompson Highway (Hwy 11) in early August.


We had a glorious time camping on the long weekend.
We learned a great deal about out RPOD including how long a full tank of fresh water lasts.
By Sunday we were down to one-third of a tank. I believe it holds 35 litres (9.24 gal. US or 7.69 CAN) and we had an extra 20 litre jug of filtered drinking water with us so we weren't in any danger, but still, one needs tap water.
The North Saskatchewan River/Abraham Lake was  a few feet away. It's the river that supplies the drinking water for Rocky Mountain House and that means the only difference between the sparkling waters before us and what we had in the tank was a whole whack of chemicals that rendered it fit for human consumption.
We had a two gallon bucket for collecting the water. We needed a funnel to get in into the tank.
A Coke bottle* and a sharp knife solved that problem and we filled it to two-thirds. We needed a bucket or two extra the next day, but that was fine. We were low enough on drinking water that we boiled some of it to mix our instant porridge and Mike had some to drink.
We were fine. We drank the Coke to make sure. That's why we had it.
I am grateful for the camping adventure, grateful that fresh water is plentiful in this country, and especially grateful that when presented with a problem we found a quick viable solution.

*Let the record show the Coke bottle as funnel was my idea. Coca-Cola Ltd. has not told me to talk up its product nor its usefulness, nor am I being compensated in any way for my above claims. If the Co. would like to compensate me, then I am woman enough to accept.
Posted by Leah J. Utas at 12:30 AM 9 comments: 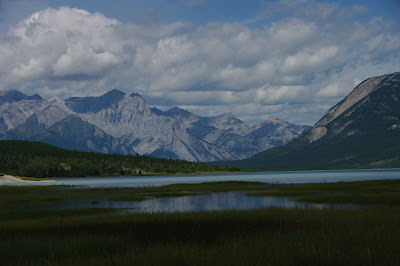 Looking north from Preacher's Point in Clearwater County.
This user maintained campsite is along Highway 11 west of Rocky Mountain House. It's about a half-hour drive from there to the Banff Park Gate.
Posted by Leah J. Utas at 12:30 AM 10 comments: 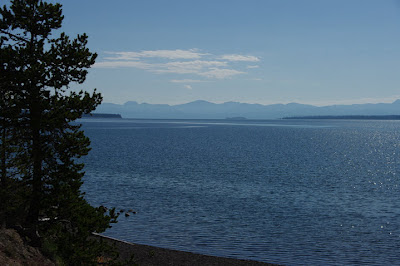 It's been two years since we went to Yellowstone. I'd love to go back.
Here's a shot of the Yellowstone Lake.