I am feeling better. This is good.
I had the flu recently and it flowed naturally and normally into a cough and then cold.
This is improving greatly. Today I may even be able to think well enough to do some editing.
While I am grateful to be feeling better, the real gratitude is elsewhere.
Being sick reminds one how good it is to be healthy.
I didn't think I needed a reminder, but apparently I did, and for that I am grateful.

Photo- Finish Friday -- The Ridge Where the West Commences

It's Thursday, and there's not a thing anyone can do about it.

While the above statement really doesn't mean anything, it reminds me of a  joke my dad always made when Thursday rolled around and someone asked, "What day is it?"

"Thursday. All day unless it rains."

My first recollection of this was when I was about three years old. Of course I had to have it explained.

Thursday, if slurred a bit, sounds like thirsty. Therefore the day will be a thirsty one unless we get some moisture.

By the calendar it's Thursday, but based on the amount of snow we have on the ground and still falling, it won't be a thirsty one for quite some time. 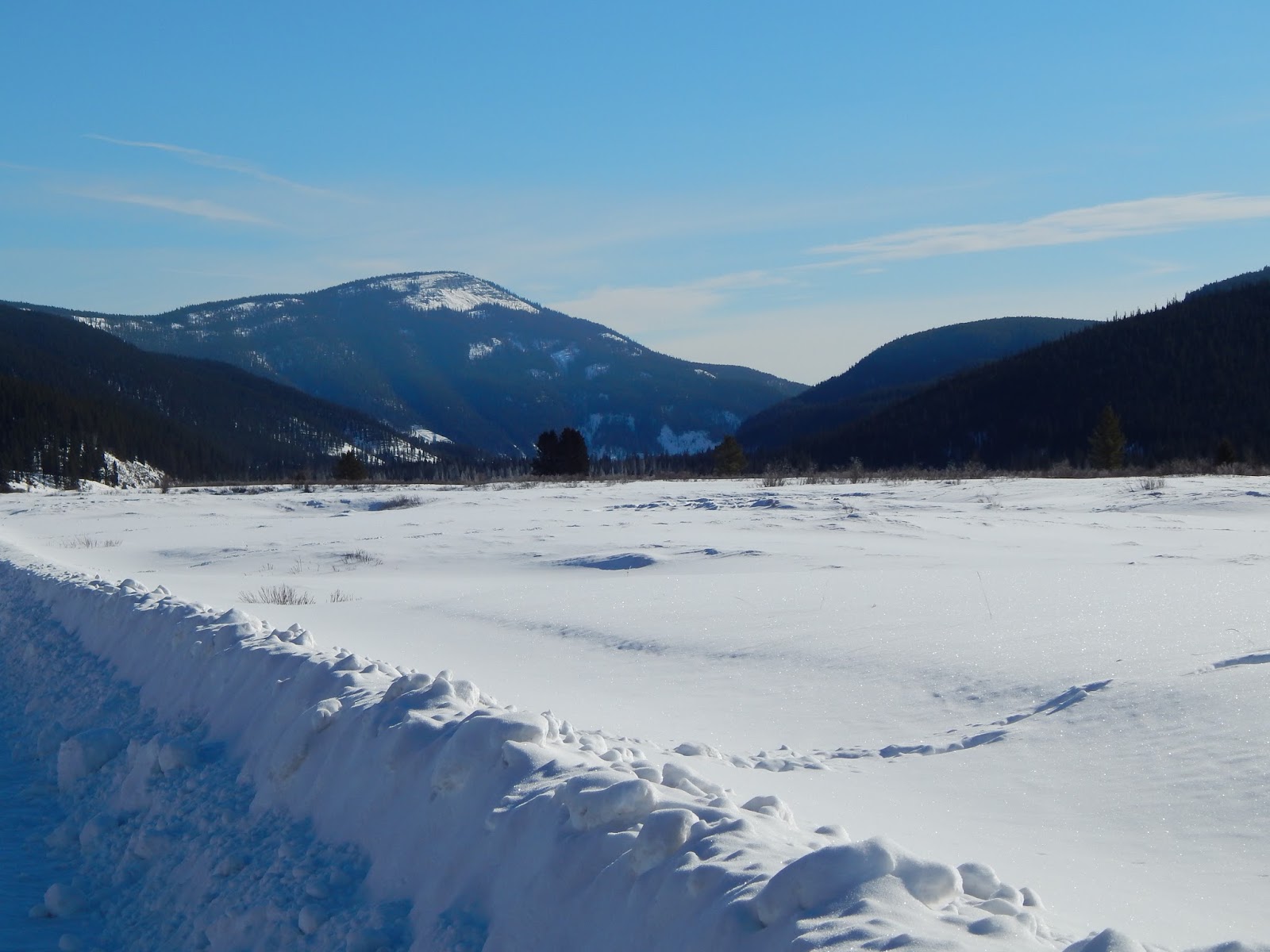 
I found myself attracted to dragons lately to the point I began drawing them.
A dragon showed up in a meditation a few weeks ago, completely unbidden. In fact, I was trying to meditate on unicorns.
The reason is quite simple. In my current WIP my main character wanted to be transformed into a deer temporarily, but became a unicorn instead.
During my unicorn research I found some meditations. It seemed like a good idea to try one.
I did, but when I tried to visualize it I got a dragon instead. Since then dragons commonly show up. I've grown quite fond of them.
In the past I was indifferent to them. While they are fine creatures they had limited emotional impact on me.
Now I think they're the best and draw them almost every day.  They're showing up all around me. Ads for dragon fruit jump out at me. I bought a book about dragons. I see mention of them constantly.
In general, they are making themselves known to me. Spiritually this means they want to be in my life.
I like to think my drawings encourage them and make them feel welcome.
Usually I stick to simple lines, but the other day I decided to colour my drawing. 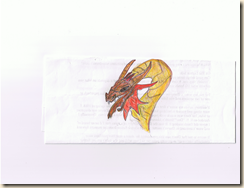 It was okay, but I wanted it brighter so I scanned it and played with some photo editing programs.
The result may seem a bit garish, but it is what I wanted. 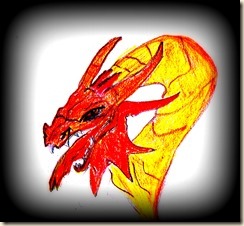 The dragons haven't made it clear to me why they are visiting in my meditations, but that's fine.
I'm happy to have them, and happy to wait.
Posted by Leah J. Utas at 7:39 AM 6 comments:

Hope, and Some Things in the Background with Feathers


The sun has been working its magic on the latest snowfall.
This melt is from our roof. We collect it in a basin for the birds to drink from and bathe in. We have hope it and the rest of the melt will continue.
While we had no takers yesterday, there are are chickadees and house finches about as you can hear in the background.
#

If you are curious about the title reference, then please see this.


I made my first batch of rouladen yesterday and I am grateful it turned out. 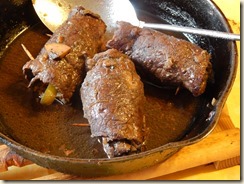 My husband and I were discussing something Saturday morning that sent him looking through our various ethnic cookbooks for a rouladen recipe.
I honestly cannot recall the subject, but I do recall him finding a few recipes that he knew were simply not correct.
They were not what he was used to. Me either, for that matter.
It stuck with me. I decided I had to make some and yesterday I got the opportunity.
I checked a few recipes on the Internet for procedure and then made the recipe up.

In short, I spread mustard on one side of the thin beef slice, topped it with pickle, a sliced of cooked bacon and a mushroom  and onion mix I cooked in the bacon grease.
I rolled the beef, secured it with toothpicks and then browned the rouladen in the remaining bacon grease to which I'd added olive oil.
Once browned I took them out,  deglazed the pan with water and red wine, put the meat back in to simmer for about 20 minutes and then popped it in the oven.
It nestled beside the veggies at 350 for about an hour.
The only spices I used were salt and pepper.

My husband and his new friend out on the Kootenay Plains.

It truly is a magnificent stump.

For Those Who can't Get To The Mountains

I bring them to you.

The noise you hear is the wind and a passing vehicle.
Posted by Leah J. Utas at 8:45 AM 5 comments:

Sheep on the Run


Big Horn Sheep like to hang around Windy Point, west of Rocky.  Rare is the trip where I don’t see any.
This flock of rams let me video them for a bit and then ran a bit, as you’ll see.
Ewes and young’uns were in a flock a bit farther down the road.
I hope you enjoy it.
The noise you hear is the wind.

I had a few lovely quiet moments Saturday under this magnificent tree out west.
It was important I do this and absolutely necessary for my well-being.
Thank you, tree, for being you.

Lithuanian declared its independence from the Soviet Union today in 1990
All they did was ask.
The guide on our tour of the Baltics last year, a Lithuanian woman, said all the Lithuanian government did was ask to leave.
It was written into the Soviet constitution ( I'm not sure this is the correct word, but it conveys the sense) that any country could ask to leave. It hadn't occurred to any country to ask until hers did it.
The above is a simplistic explanation of how Lithuania regained its independence, but it is how it started.

The other day I got a sudden interest in something I had forgotten about over the years and for it I am grateful.
The something was a video camera my husband got me for Christmas 2008.
I didn't want it. I wasn't interested in it and as I had two fairly new still cameras at the time I didn't need it and frankly,  felt overwhelmed.
It got used a bit and then ignored.
Thursday night after I settled into bed I got the urge to fire it up and see what I could do with it.
On Friday I dug it out. I knew I was on the right track when I went looking for the manual. Most manuals I keep in a zippered bag in a cupboard near the cameras.
I gave the bag a cursory check distracted by a nagging idea to look downstairs where we've stored the old photo equipment.
I did. The manual was sitting right on top of a camera bag, waiting.
I played a bit on Friday night and then a few more times on Saturday and Sunday to learn about it and get a feel for it.
It's fun.
I'm enjoying it. I'm looking forward to making videos of the birds singing and feeding and whatever else comes to mind.
I am grateful for this new old toy for the fun of it and because as I was getting it ready to use I felt more  awake, interested, alive.
In 2008 I was enjoying my first year of heart problems and on a high dose of the beta blocker Metoprolol. Among the gifts this medication brings is being easy going to the point of not caring much what happens around you.
I suspect this, plus the heart issue itself, led to me not wanting the video camera when I received it.
The newfound interest suggests that the last traces of the medication are out of my system and /or a new layer of creativity has been kindled.
Whatever the reason it is wonderful and I am grateful.

No matter what happens in our future we will always have the past.
Posted by Leah J. Utas at 12:30 AM 7 comments:

Last week my computer was acting up and for it I am grateful.
It came up with a message about Windows not starting, offered a few possible reasons and suggested a few possible ways to get it started.
This scared me.
The last known settings option worked, and that's wonderful, but what did it mean?
Would it always be so, or was there a slow, lingering death awaiting it?
Because I had Windows XP, and because said OS is going to be not supported after next month, and because the computer is seven years old I had some obvious questions for the techies.
The upshot was finding and curing the problem, stripping the old OS, cloning the hard drive and putting in the new OS was about two-thirds the cost of buying a new computer.
So I bought. It's a  lenovo (lowercase L is right in front of me) all -in-one. It's just a monitor with guts and that takes adjustment.
Meanwhile, the old one turned out to likely just have some corrupted files. If I'd had the courage to do a system restore I likely would have saved myself money and fretting.
I don't care.
I have the old one which will be set up downstairs once we make a place for it.
So I spent money I didn't have to for something I don't need and yet I am grateful.
Why?
I'd need to get a new computer at some point anyway, and certainly I'd need a new OS soon, we did it without losing anything, and we have two computers.
The new OS takes some learning. I do not care for the pictures program, but I am confident it can be learned without too much swearing.
The thing that had to be done someday is now done and largely behind me, and for that I am grateful.