Lately I've gotten back into talking with my crystals. I haven't done it in years, but I recently read a book about their uses and decided to get back to it.
In short, one relaxes and contacts the intelligence of the rock.  They are as alive as we are though in a different manner, and they have a consciousness. They, like the plants we use in medicine, help us. All we need do is ask.

The other day I contacted my smallest malachite. The first thing it told me was I had too much copper in my blood. It's a copper-based rock so I thought I may be misinterpreting its message.
Then I heard "manganese."
This meant I needed some in my diet.
After the sessions I researched foods high in manganese. One of the best is hazelnuts so I ate a handful.

I'd had a headache for more than a day. I thought it may have been from the old cheddar cheese I'd been eating so had decided to accept the punishment.  But less than five minutes after eating the hazelnuts the headache was gone.

I am grateful for that, for the message from the malachite, and for the book I'd read that sent me back down the path of talking to my rocks.

My opinion toward our Prime Minister changed profoundly the other day.
I originally thought he was too much of a political lightweight to do anything profound, and that he got the job solely on his name.
Justin Trudeau has opened Canada's doors to refugees. He's taken a great deal of flack for it at least on social media. Arguments are mounted about our seniors/veterans/homeless who ought to be looked after first.

Certainly they need to be cared for, but it must be understood that  if you are born in Canada, and especially if you are white, then you have already won the lottery. We have programs to help our own. Yes, there are those who fall through the cracks, but for the most part they can find food and shelter, even if only for a night.

Refugees have lost everything. They have what they can carry.
We give them shelter and food and clothing and most important of all, we give them hope.
This is the right thing to do.

Each and every day we get a choice to either act from love or act from fear. By the tenets of religion, spirituality, and plain being a decent person we are exhorted to choose love.

As I thought about it the other day I took an objective, overall view and realized that Justin Trudeau is doing what every one of us is supposed to do: he has chosen love.

On Saturday I got to spend more than an hour out in the woods and for it I am grateful.
It's something I'd needed to do for a while. I need to be around trees and walk through the quiet forest and just be.
Mike was busy collecting wood for a later carving project and this left me to my own devices.
This is best.
I wandered. I leaned against spruces and poplars and then found a magnificent spruce who welcomed me to sit and rest my back against it.  Eventually I sprawled out underneath it enjoying the soothing energy of the trees and the ground and feeling the sun and wind on my face.
This is what the Japanese call Shinrin-Yoku and they are right.
I have always done this. Our farm was surrounded by a mixed wood forest and I spent as much time in it as I could.
My time Saturday was wonderful, almost like being a kid again. I am very grateful to the forest for soothing me. 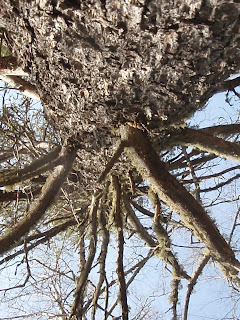 My husband baked me a Black Forest Cake on the weekend. He insisted it be a traditional cake. That means custard filling.
It took a great deal of work, but every bite makes it worth it.
He did it from scratch using a recipe for Mock Saddle Of Venison, one of my favourite cakes, and used cacao nibs for the chocolate.
The whipped cream is coconut milk. The cake layers are drenched in Kirsch. The chocolate curls were omitted.
It is a very rich cake yet I managed to eat a healthy slice of it as I think anything less would be an insult to the cook.
It took hard work, dedication, love, and plenty of eggs, and for it I am grateful. 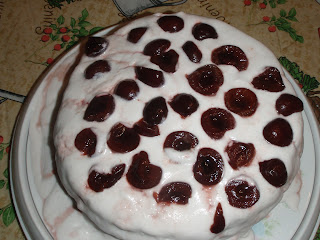 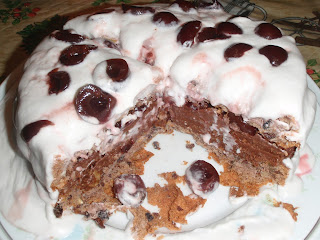 I have felt angels near me on two occasions. I expect they've been around at other times because, well, angels are like that, but on these two occasions I am sure.

The first time was about 20 years ago. My inlaws hosted a sounding circle at their clinic and I was one of the warm bodies helping to fill out the circle. Most of it is long gone from my memory, but I do recall quite clearly being blocked.
If memory serves we sounded assorted vowel sounds and I think they were directed at specific people in the circle. We may have sung their names, too, I don't recall.
At one point I felt something in front of me and could almost see it. The being was at least as tall as the ceiling though felt taller. Even though there was no one physically present it was like I couldn't see through it. I felt that it was time to stop. I also knew, by distinct feeling, the presence blocking me was an angel.

The second instance was last week. This time the Archangel Jophiel stood by my computer for most of a weekend.
Here's some background:
I've had some niggling computer problems since about December. Windows 7 won't shut down properly at times for one. It goes right to the very last screen and is less than one second, if that, away from shutting completely when it freezes. I have to press the button to shut it off. I asked the nice people where I bought it and was assured that as long as it all but shut down properly it was nothing to worry about.

One a few occasions the display didn't go black after two minutes of idling like its set to do. That appears to have resolved itself. I recently tried Reiki on the computer and discovered if I did it during shut down it would proceed normally. When I didn't, it locked.

But the most annoying issue was every time I exited Word it said changes had been made to the normal template and did I want to save them?
This started one day in December after changes somehow got made to said template. I put them back the way I want and saved the changes, as one does. But it kept asking me every day despite me not having done anything to warrant it.

I am not computer savvy. This is unlikely to change. Consequently, doing anything beyond the most basic clean up and the occasional system restore I leave it to the pros. I'd checked for all the things that could be wrong. I found things that could be done, but they were beyond me except for the one that said I could uncheck the box that made this box come up.
I didn't, because there was always the possibility that there was a wee virus inside and I didn't want to forget it was there if I ever had to take the computer in to the shop.

Then last weekend I felt a presence at my desk. It made me want to sort out the template changes problem again. I thought about it then did nothing.
But then one morning last weekend during my meditation my mind went to the presence. I asked who who was visiting. The question was barely formed when she told me she was Jophiel. She told me to create beauty.
Part of beauty is strength, part of strength is deciding, and part of that is doing a thing you've meant to do for a while.
In short, I checked all the factors that may be making the template box come up, actually looked through them and couldn't find any evidence of them. There may still be an issue, but nothing obvious, so I simply unchecked the box that makes the box come up.
Shortly thereafter, the Archangel departed.
I have yet to try not using Reiki on shutdown. I intend to do so shortly.

So now I must create beauty in writing, in life, in wherever it can be made and by whatever means is available. Part of that is writing about the things we don't normally discuss, like angel visits.

Yesterday was cold. Snow was persistent though so thin one had to know it was there to see it.
I did not have to go out for anything and for that I am grateful.

Also, I got some writing done. I am grateful for that, too.

Your Life Is Your Strength

The above is what I received this morning while meditating. Preceding it was a blast of light near the bottom of the sacral chakra.  Preceding that was a blast of strength felt at the base of the solar plexus chakra coupled with a scene in which the cover of a manhole located there came off.

There's no mistaking the interpretation. It is time to talk of many things,* the bulk of which no one talks about for fear of being labelled a kook, a flake, or the like.
So what?
I am that I am.
My life is my strength.
That means the events of it, the things that shape you and make you what you are. In my case, I  believe those events include interactions with extraterrestrials.
I can't offer proof to anyone, nor do I presume to. What I have to offer in evidence is a series of events throughout my life that lead me to this conclusion.

For example, I had a dream when I was about 10 years old. In it I awoke on an operating table surrounded by a team of doctors. The room was dingy, dirty, and yellowish. All the doctors were in the usual mask, cap, and gown, blue in color. The only other thing I remember of this was thinking I should go right back to sleep. I did.

I have always remembered this. Consequently when I read a similar description in Whitley Strieber's Communion my heart thumped against my ribcage.  That has long been my signal to pay attention to what is happening.
I had the same response when I saw the bookcover. It terrified me yet I felt compelled to read it. It took several weeks before I built up the courage to do so. I am glad I did.

There are many other incidents throughout my early life. They've all but disappeared now, and I can honestly say I miss them.
Today's message is probably the signal to move on to the next phase of whatever is happening.
I am ready.

__
* Paraphrase from The Walrus and The Carpenter, from Through The Looking -Glass and What Alice Found There, Lewis Carroll.