I've been experimenting with rice tortillas as substitutes for gluten products. It works, and I am grateful.
I used them on Saturday in the place of noodles for lasagna. They dissolved in the course of baking, but there were still there in spirit.
And they were tasty.

Yesterday I tried used them in place of phyllo pastry in spanakopita.  They held together well and made for a reasonable substitute. Also, they were tasty.

I am grateful such products exist and grateful that I am able to use them.
I did something similar a few years ago with gf tortillas, but had kale in the filling. 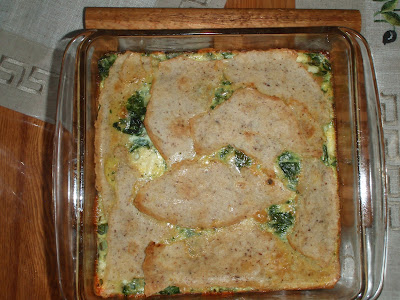 I slipped on the ice in a filthy mud puddle in a driving lane between two parking lots, and I am grateful.
Here's why.
I am fine.
Last Thursday was a cold, wet, grey day. I had my car in for a wheel alignment and to pass the time I walked across the road to a store. On the way back I had to walk in the puddle to give room to oncoming traffic, had there been any, and slipped.

The fall wasn't that hard. I believe I hit my back first and probably kind of rolled before knocking the back of my head on the wet ground. It was a good thunk, but I was mostly down already so it was only a drop of an inch or two.
This makes a difference.
I got up and immediately did some neck stretches and rolls and have kept doing them.

After my initial assessment at ER I was left to wait for 45 minutes before being called in to a room. Once in a room I was left for an hour. Rather than complain I was grateful.
When you are left alone it means you aren't in any danger. It's when they take you straight in and fuss over you that you need to worry.

Now I've got much to whine about over this. I was soaked and cold and did not feel clean and I had a headache.
However, I could have cracked my skull open, gotten a concussion, bruised myself, fallen face first in the icy water, or even broken my hip.
But none of that happened.
Instead I am grateful that all I had was a wee bump at the back of my head that was all but gone the next morning, whiplash, and a few pulled muscles.
As I said at the top of the post I am fine, and for it I am grateful.

-excerpt from Star Heart, the working title of a memoir I am writing to get a handle on the contact I have had in my life.

We set up our trail camera on some wild property in Mike's family.
I am grateful we got this: 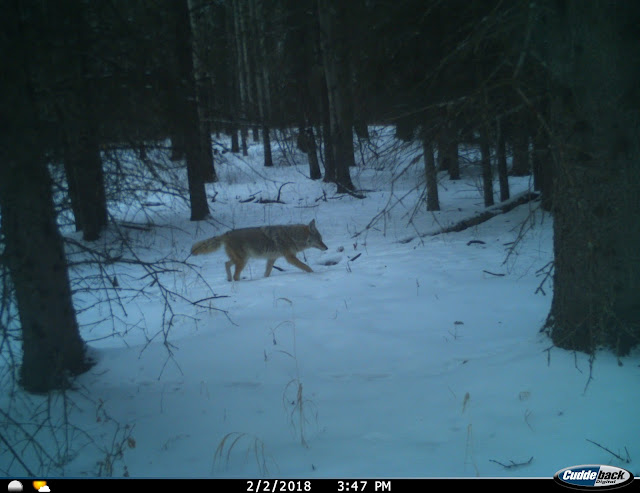 There are certain things that come up at specific times such as the Academy Awards, the change of seasons, even grocery store sales that you can set the calendar by, and for them I am grateful.
Why?
Because they can be counted on.
No matter what is happening events that happen at or near the same time each month or year offer us consistency. It is this consistency that brings stability to our lives.
I'm all for new stuff, adventures, excitement, but the new and exciting must be tempered with the stable and consistent or we lose our balance.
So for that reason I am grateful.