Today I go for a CT scan.
It's being done out of an abundance of caution, nothing more. It's to check to ensure the cancer I had hasn't reared up and spread out.
I am convinced the cure has long since taken, but garnering physical evidence to back it up is never wrong.
I have to go to Red Deer for it and generally that's a pleasant drive.
The test is covered by health care and goes quickly.
It's all good.

The zucchini pictured below came to us courtesy Mike's mom. She had given us many of them this year including one that makes this entree look meager.
I am grateful for the zukes and for the bounty of the garden in general.
The zucchini pictured below measured 30 cm (12 in. in the Old Tongue). My husband carved it into a pair of fine boats for our eating pleasure.
We ate the one topped with cheese and I froze the other one for a later day when garden fresh is but a fond memory. 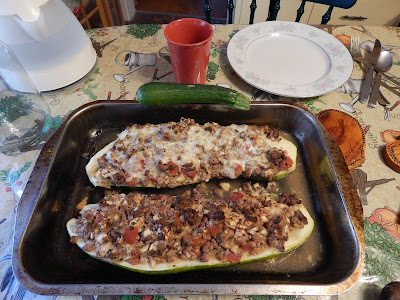 A regulation -sized zucchini was added for perspective.

He was mostly done for the day when I took this picture.
It took him all day Sunday. He has another few gallons of apples to process. 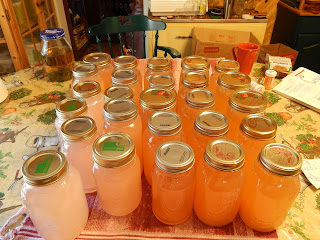 I wanted brownies, but it was too hot to bake.
Instead I began experimenting with rolled oats mixed into coconut oil with molassess, cane syrup, and coconut.
And I liked it.
It took out the craving nicely without heating up the house. In a hot, dry summer, that's important.
I was grateful for having done it and liked it enough to play around with the basic premise. I've added goji berries, raisins, peanut butter, vanilla, sea salt, walnuts, and pecans in various versions.
They're all good.
But the raw rolled oats took its toll. I  had half -expected it as years ago I used to soak oats overnight in cranberry juice for breakfast. I made various versions of it and loved it, but I got nasty stomach pains, fevers, I lost weight, and it wasn't good.
I thought it might be the raw oats so stopped eating it and the tummy troubles magically disappeared.
I'd hoped the oats would cook enough in the hot oil, but I was out of luck.
Giving up on the uncooked chocolate goodness was out of the question so I made a batch omitting the oats and cranking up the coconut.
It was very good and I was content for a short while.
Then it occurred to me to cook the oats and see what happens. So yesterday I made one serving size of porridge with goji berries and raisins and as it cooled I threw together the other constituents of the squares except peanut butter.
I am so grateful I did.
My Chocolate Porridge Squares are filling, satisfying, and they are really quite healthy.
I will have to make the peanut butter version soon.
Science demands it.

Jasper and Banff National Parks are a short, easy drive from my home in Rocky Mountain House.

Highway 11, a.k.a. The David Thompson Highway, passes through Rocky on its way to join Highway 93, a.k.a. the Columbia Icefields Parkway.
The parkway is the portion of Highway 93 through the two parks beginning at Jasper townsite and ending at the Trans-Canada near Lake Louise.
It's about a two hour drive west from my house to Saskatchewan Crossing. That's where #11 meets #93.
The mountains begin about an hour west of Rocky.
It's fairly easy to go out for a hike, or a drive.  I am so grateful I get to live here and that we have enough sense to get out and enjoy the mountains as we can.
This year we've been picnicking, too.
They are simple affairs: gluten free bread or crackers, cheese, sausage, water, Coca-Cola, but with the sight of the mountains and the spicing of the fresh air, they are feasts.

This photo taken by Mike on Saturday is at a scenic stop just south of Saskatchewan Crossing in Banff National Park. 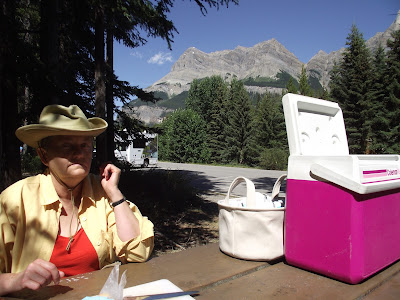