Spring in the Canadian Rockies.
Note: this was spring 2012, but they're all about the same.
***
Please click over to Flickr, click again, and then choose full screen. It makes me happy when you do this.

When did parents become stupid?

I'm speaking about television portrayals, especially commercials. Or perhaps the question ought to be when did children become smarmy know- it- alls?

In fairness, kids can act like know- it- alls in the real world.  I am sure I did it though my mind has charitably forgotten the details.
Commonality does not mean we have to see it and that lets me circle back to my point.

I've noticed in commercials parents are often portrayed as knowing less about the world than their pre-pubescent loinfruit.

Currently an Easter candy commercial is gnawing away at my calmness. In it a boy of perhaps seven is shopping with his mother. Chocolate bunnies loom. She suggests getting a bevy of them and is summarily, and smugly, corrected by little loinfruit.
From him we learn the proper collective nouns for the lagomorphs in question. He even provides a collective noun specifically for domestic rabbits.

This is our cue to coo, "Ooooh isn't he smart."

A few years ago a public service commercial had a father and daughter cleaning up after a meal.
Daddy was about to pour grease down the drain. Fortunately for all concerned, especially the pipes, loinfruit is there to chastise and correct him.

It was once that parents knew things like proper terms and not to pour grease down a drain and passed them on to kids.

The urge to invent overtook me yesterday morning.
I was contemplating gluten-free tortillas originally, but after chewing it over along with my breakfast I listed toward pita bread.

The logical solution was to do both.
Further, it was logical to invent my own recipe. Creation was my point.

Certainly I have recipes on file. I need something to actively ignore to get the creative wires burning and I needed some clue regarding proportions.

Flax was ground followed by almonds. When I saw how much I had I added rice flour, potato starch, and soy flour along with two tablespoons of psyllium fibre for the chewy stretchiness missing from gluten free goodies.
It was maybe two cups. I have issues with exact measures. Further, I prefer to throw things together and see what happens.
I'd mixed some warm water and a teaspoon of sugar along with two teaspoons of yeast a few minutes earlier. It was pleasingly frothy when I returned to it.

I tossed everything together and let it sit for a bit. It didn't rise much and neither had I expected it to.  More yeast would have been necessary and this experiment was all about minimalism.

The dough was rolled into a cylinder and cut into nine pieces. Each piece was flattened and rolled into something either pita-worthy or tortilla-esque.
For the sake of simplicity and more hands-on work I did them in a frying pan.

Here's one of my favourites: 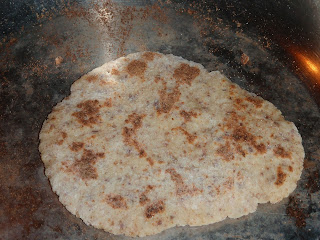 It was reasonably uniform and it browned well.
I ate a few of them. They were tasty enough and served their purpose, and really, that's all one can ask of a flatbread.

Yesterday was just another day.
It was the kind of a day where we go about our business in the company of one another. Another day in a long line of days of being together where nothing special happens.

Husband transplanted his cacti. He'd done so on Saturday and continued it yesterday.
Such matters are a labour of love for him. He is happiest when he is amongst the plant kingdom. On a level only he understands they are his kith and kin and he is charged with their care.

I was busy at my manuscript. I needed to go over it and take notes so I can start work on the long synopsis for the proposal package. I will work on the package while the hard copy cools enough for me to find my mistakes.
As I made my notes over the past few days I found places that required more work, more words, more thought. I made notes on that as well and will attend to them when I go over the version I printed out.

Husband was busy with plants, I with my words.
It was a good day. A normal day. A day where nothing special happens. It was a wonderful day, and for it I am grateful.

Photo-Finish Friday -Out of the Clouds

Preacher's Point, good for canoeing and hiking.
Preaching is not recommended.

We need a bit of summer.
This was taken at Preacher's Point in the West Country about a half- hour east of the Banff Park Boundary along the David Thompson Highway (Hwy 11).
It is a wonderful place to camp even though it is free and therefore very popular. The mountain peaks you see are known as ex coelis, Latin for "out of the clouds."
You can read the reason by following the link.

A woodpecker contemplates the pecking of some wood.

A Downy woodpecker has been by lately.
I've missed him.
A few years ago he, or his kith or kin, frequented a feeder we had hanging from our shed.
We didn't feed birds for a few years. Woodpecker desertion was part of our punishment.
We started again last summer and carried on for the winter. It took time for the woodpecker to find us, but between the bird ball and the available trees, he's back.
I am grateful.
Posted by Leah J. Utas at 1:30 AM 16 comments:

Photo-Finish Friday -- A Bear in the Woods

A black bear forages for berries along the Columbia Icefields Parkway. May I suggest clicking on it to get to Flickr and then selecting full screen?
Posted by Leah J. Utas at 12:30 AM 8 comments:

As I wind up an editing/minor rewrite of  my manuscript I see something I can't avoid: Chapter 18 needs help from Chapter One. Said help needs to be written.
It's not a huge surprise. I've known since at least Chapter 14 I needed to seed a bit of backstory to make Chapter 18 work.

Why didn't I knuckle down and get it done?

Because my Devil writer's helper said, "It's not necessary. You've written this so well the reader will fill it in. Leave something to their imaginations. They'll create with you. They want that."
Soothing, kind words.
The kind of kind words that appeal to the ego and to the laziness. A most potent combination.

My angel writer's helper has been screaming at me for the past four chapters. "You've done a lousy job building up to this. It comes out of nowhere. Remember Gr. 8 English?  Deus ex Machina? It was bad, remember?"

Angel helper sounds miserable, but she's taking the place of my muse who went out for a walk to cool down a few months ago and hasn't returned. Muse hates it when I don't listen.

Devil helper is still whispering the potent, seductive words, but angel is winning. Angel is correct. A small scene in Chapter One will lay the pipes and electrical connections necessary for the reader to go,"Oh, yeah."

I've put it off as long as I can. As soon as I finish editing the final few chapters I'll get right to it.

At The Bird Ball

This Downy Woodpecker found the suet ball in the front yard this afternoon.
I was so pleased.
Posted by Leah J. Utas at 7:19 PM 8 comments:

Gratitude Monday --The Power of Off

I spent a few unscheduled quiet moments on Saturday and I am very happy about it.
The power went off in mid-afternoon just as I was about to stir the final two ingredients into a cake batter. Rather than cuss and swear and curse about the infernality of it all, I added the flour, set aside the milk, and popped the batter in the fridge.
The magic juice we depend on would return in its own time and no amount of prayer, begging, or voodoo would change it.
It was a sunny day. Spring was in the air if not on the calendar.
I opened the front door to the afternoon sun, raised the window on the screen door to let in the fresh air, stretched my middle-aged self upon a leather loveseat and listened to the melt.
It was soothing and invigorating at the same time. The break from all human-engineered house noises was welcome. Humming of appliances was replaced by the happy tinkling of water flowing from downspouts.
It was a glorious chance to break away from the common activities of my usual life, and for it I am grateful.
Posted by Leah J. Utas at 1:00 AM 9 comments:

This rose-breasted grosbeak visited a few summers ago. I'd like him or one like him to pay a return call.
My guess is it won't be until June or so, but I can dream.
I'm hoping by dint of sympathetic magic this photo will bring the visitor back.
Posted by Leah J. Utas at 2:10 PM 11 comments:

Photo-Finish Friday -- To The Rockies

Looking west along the David Thompson Highway (Hwy. 11). I took the photo about this time last year.
Posted by Leah J. Utas at 12:30 AM 7 comments:

Gratitude Monday -- A Lesson from a Squirrel

I learned a lesson in gratitude from a squirrel the other day, and for it I am grateful.
The squirrel, pictured above, is nibbling a peanut from the handful I set out.
I found them in the bottom of a container at the back of the cupboard. They looked fine, but the smell was more than off.
Though not fit for human consumption I thought I might attract a blue jay.
I'd set out fresh nuts in the shell a few times and the blue jay decided they were his and his alone.
He didn't even come by this time.
The squirrel is around quite a bit. He usually raids the bird feeder for sunflowers, but this time he came for the peanuts.
The smell did not bother him. He took every last one of them. Most went to his stash in the nearby swallow condominium, but  he sampled a few here and there. I was fortunate to get this action shot.
Food was made available. The squirrel found it edible and he knew that no matter how it smelled it was still food and still good and he took it because he knew he might be hungry one day soon.
It's a good reminder to not be overly selective when it comes to food as you never know when you might need it.
I presume he was grateful for it. I'm sure taking all of them was his way of saying thanks.
I am grateful they were edible and went to a good home.