Our world is flawed and filled with problems and for it I am grateful.
If we lived in a perfect world, then there would be nothing to do, nothing to talk about, and no reason to grow.
It would be boring as hell and in some ways it might actually be Hell.
Think about it. There'd be no point in writing stories or any other form of expression that seeks to put a light on the human condition.
They'd all be the confirmations of how great we have it.
I think we'd be bored to tears as humans.
Now if we weren't human and lived in a perfect world, that'd be fine.
But as long as we have human lives, as we understand them today, then it is important to have flaws and problems to overcome.
How else would we determine how far we have to go?

I've had some freelance work come my way. I am grateful to have it, and further grateful I was thought of for it.
Here's what happened.
The two reporters at the local paper gave their notices effective for the same day, next Monday.
That left the editor in a bind as there are some special sections due along with the regular work.
My friend at The Mountaineer, Bernie Visotto, asked me if I'd be interested in filling in until the new staff started in a few weeks.  If so, then I should contact the editor.
I am very grateful to her for this.
I discussed it with the editor and agreed to take on a few assignments over the next few weeks. I'll get the specifics of the work tomorrow.
This is all good. It's where I used to work. While most of the people there are different from those I worked with, the work itself is virtually the same.
That helps a great deal.

But wait, there's more.
I've been working at home since 2001 though I did some freelance for the paper back around 2008.
I like it in that I don't have to go out much and I can stay away from people. As an introvert I think that's important.
However, several weeks ago around the beginning of January a thought flowed into my mind during meditation.
It's time to go out in the world.
This thought came to me several times over the next several days.
Rather than shy away I found it intriguing. I had no idea what I was supposed to do so I did the thing you're supposed to do.
I put it out to God/Universe/ All That Is.
Whenever the thought flowed to me I said I am totally game to do it, but how it comes about is up to you.
The offer is clearly the how of it.

Shortly before I got this offer I felt excited, jittery almost, as if something were  about to happen.
It did, and for it I am grateful.

Labels: blessings, freelance, putting it out to the Universe, The Mountaineer, work

One never knows what is around the corner. 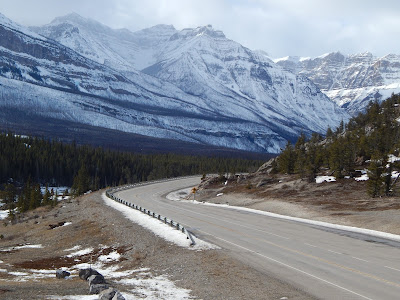 It's always best to investigate.

On Saturday we took a drive out west along Highway 11.
We had a picnic in the car, did a bit of walking, and then drove just inside Banff Park to the Glacier Lake staging area and did a bit of that hike.
It was a grand day in the great outdoors and for it I am grateful.
This photo is looking east  and south from Whirlpool Point along Highway 11. 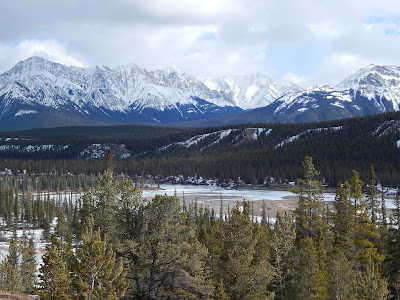 We got out for a fine walk yesterday. The trail goes between two lakes, but we only did a bit of it. I'm not sure of the distance, a few kilometres likely, but the total time was about 90 minutes.
That alone is something for which I am grateful.
It was a few degrees above zero C. We were alone on the trail. The air was fresh and clear. Yet more things to be grateful for, and I am.
But what I am especially grateful for is the ski pole I used. It kept me upright.
We've had some melty weather. It gets below freezing at night. This means ice. The trail was hard packed to being with, but with ice it was a lot like walking on a skating rink.
The pole helped me to not slip much. I did twice, but am not the worse for it.
I am grateful for that, too.
The trail has hills. Sippery hills are dangerous to walk down and a trial to walk up.
The stick served me well.

We watched a very pleasant movie on TV the other night, Salmon Fishing In The Yemen.
It was recorded last Monday and we watched it a few days later.
I am grateful to have seen it, but more than anything I am confused as to why it was recorded.
Finding and setting programs for the PVR to record is my duty and I take it seriously.
This movie was a total mystery to us on many levels including we'd never heard of it and had no reason to record it.
Near as I can figure it we're the beneficiaries of "Too Smart Technology." That is, after monitoring our viewing habits for six weeks the PVR thought the movie was something we might enjoy.
It was right.

***
I am sure there is a prosaic explanantion for the above.
Malfunction of some sort, presumably. Or my finger slipped.
But until it is otherwise explained I am going with the above and hope that any choice it makes in the future is as enjoyable as this one.