Photo-Finish Friday - Down the Street

I turned my head to look down a street in Tallinn and the above is what I saw.
Posted by Leah J. Utas at 6:28 AM 6 comments:

This week I express my gratitude for pico de gallo and one of its chief constituents: cilantro.
The cilantro I used yesterday to make it came from my garden. I haven't planted said plant in two seasons.
I may never have to plant it again.
When I grew it in 2011 I let it go to seed, as one does when one wants coriander. I took the leaves fresh throughout the summer and harvested the seeds in the fall.
I had more than enough.
They're feisty things. Many seeds fall to the ground during harvest. It is pointless to pick them up so I let them stay knowing I could always take the new growth out when they sprouted in the spring.
When the inevitable happened I could not bring myself to rip them from the ground. They smell good, they taste good, and I love the fresh, clean taste of the leaves.
That said, I had no need of the leaves. I have two large freezer bags of them from two years ago
So they grew and I harvested the coriander I didn't need. I'm still using the seeds from a crop Mike grew 10 years ago.
More seeds fell last fall. I have a few random plants in with the chard and I cannot bring myself to rip them out. They smell good, they taste good, and I love the fresh, clean smell of the leaves this year as much as any other year.
To put them to good use I made a batch of the aforementioned pico de gallo. It's easy to put together, tastes great, and gives me an excuse to chop veggies.
I find it relaxing and even as I concentrate on what I am doing it frees a part of my mind to think of other things.
I am grateful for that, too.

Here's a pic of the pico.
I served it with gluten-free steak and bean enchilada casserole last night.
And I put more cilantro in the casserole. 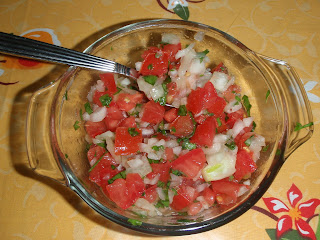 If you're curious, I got the recipe from Pioneer Woman's site here.
Posted by Leah J. Utas at 1:00 AM 11 comments:

Two men fish off the pier on Muhu Island, Estonia.
Posted by Leah J. Utas at 1:00 AM 5 comments:

A Visit to the Discard Pile

I've been culling the herd the last few days and it is not easy.
The herd in this case is all the written-on paper I've collected over years some of which dates back to my teens.
I wasn't going to write about it, but this post made me realize the catharsis of writing about it is integral to it.
Much of it was written on  by me, but I've got my share of newspaper clippings of items I found amusing. Those were easy to toss.

For example: Years ago a man in Bristol was once so depressed had a friend kill him. The fellow was losing his hair and got it into his head surgery on his testicles would stop the loss.
He had the surgery though the article did not say what kind of surgery was involved.

*
Another fellow beat a charge of driving naked from the waist down after he convinced the judge having his girlfriend on his lap rendered his partial nudity invisible to the public.

*
About 30 years ago Alberta's then Solicitor General Graham Harle was caught with a hooker.
He said at the time he was researching Edmonton's prostitution problem. I kept a small news story about this noting that Penthouse magazine named him Researcher of the Month.

*
All these are amusing enough, but I don't need to keep them.

Culling some of my writing has been more difficult though plenty of the older stuff has been tossed with barely a second thought. But some needs a second or third thought and others I will keep simply because it acts as anchor to a specific point in life.

Pad falls
silent under the stars
through the fields
past the forest edge.
Home.

I've been meaning to do this for years. I am a pack rat by nature, but easy as some of these are to toss it still gives me a pang.
This was me, this is what I felt, thought, believed, wanted at a certain time in my life.
It is my personal  history in words. As the ink and paper get slotted into recycling or shredding a bit of me is discarded with it.
It is difficult, but necessary.
I have no need for these items. I have need for the space in my home and in my soul that will be free once they are gone.
And one day, if I don't, someone else will have to do it. If I do it myself now, then the items I collected or created are sent away with love and thanks.
It may not mean anything to the inanimate object, but it does mean something to me.

It was late afternoon on the promenade in Kaunas, Lithuania. I was taking a respite from the heat on a bench shaded by trees.
This young woman stopped at a bench across from me and a bit to my left. She was with another young woman, a young man and a child. The couple and child suggested songs for her to play and she played them.

She danced the bow across the strings with skill and talent and joy and love. Her songs filled the promenade and compelled me to stay seated even as I was long rested.
I have no idea what she was playing. It may have been classical pieces, it could have been local folk tunes. They each had a strong somber undercurrent that in turn filled me with sadness and joy.

I walked away.
After about a block the thrill of exploring was replaced by a longing to listen more.
I went back.
I listened.
I asked her, using motions and body language, if I could take her picture.
I tossed a 5-Lita coin (about $2 CDN) in the violin case and made myself go back to the hotel.

I am so grateful to this woman for sharing her talent.
Yes, she was earning money for it and so she should, but these few moments where I was fortunate enough to hear concert quality music on a lovely European afternoon will be with me for the rest of my life.

Here's a picture of Tallinn, Estonia, from a lookout.
I took several pics of it so have added another below.

I like to overhear conversations.
Before this gets any further I don't deliberately set out to eavesdrop on anyone. That's a gross invasion of privacy of which I do not approve.
That aside, when one is out in public it is difficult to not hear what others are saying. I say if it's out in public it is fair game.

We went to a large grocery store in Tallinn to get lunch supplies as we were in for a long bus day.
I love to wander foreign food stores and was having the time of my life looking at food and enjoying the air conditioning. Food stores, along with drinking the local beer and tasting what a country does to the basic Coca-Cola syrup tells me a great deal about a people.
We had a look at the various items such as meats and cheeses and breads and then checked out at the liquor aisles.
It was there I heard two young men, tall, skinny, Slavic, speaking in English loud enough for all to know their sacred mission.
"If you want to get laid you have to buy us champagne."
Given the location it would appear these fellows kept up their end of the contract.

I'm not sure if I'll ever use this line beyond this blog post, but it does set one's imagination off on various paths.
What happened? Was the purchase in vain?
Did they ever see the women again or did they disappear before terms were met?

As to why the young men were speaking English in Estonia my guess is it was either the language they had in common or the women spoke English and they were being faithful to the quote.

It doesn't matter to me what happened later.
What matters is I have a line of dialogue that worked its way into my mind and will always remind me of my trip to the Baltics.

Gratitude Monday -- Behind the Torn Curtain

We got back Saturday from two weeks in the Baltic countries, Latvia, Lithuania, Estonia.
It was a wonderful trip and I am so grateful to have been there.
We went with a tour company we trust and it met our expectations and then some.
I am grateful for so many things as regards this vacation, but for now let me say I am grateful these countries are free to visit, and the people in them are free.