We spent the night in Meadow Lake Provincial park, SK, recently and ate our dinner and breakfast in the village Goodsoil.
We ate both times at The Little Brown Jug, one of three restaurants in the village of maybe 300 people.
The food was pretty good, but the atmosphere was wonderful and I am grateful for the moments I spent there.
When we arrived there was one old fellow eating. He was cheerful enough, but when locals came in and asked him how he was he'd say, "Waiting to die."
But he smiled as he did it. While it carried an edge of seriousness, it was offered lightly.
When I got up to look for the washroom and then made an oh, there it is gesture, Charlie, if I recall his name correctly, called over "You should have asked me."
A few people began to drift in. One woman in her forties bundled over to the coffee machine and made a fresh pot. A fellow when to the fridge, got a soft drink, and called to the kitchen saying what he'd done.
It sounded like a few of them were Charlie's family, one a grandchild.
Within in a few minutes about eight people had either joined Charlie or sat at the table beside him. A few minutes after that the meeting of the Goodsoil branch of the Saskatchewan Wildlife Federation came to order.
It was a delight.
The coffee-making woman read the minutes of the previous meeting. I heard how the steak fry was mostly a success, but not enough people brought food and something was going to be done.
I don't recall what they decided, but I am confident it will never happen again.
It was hard not to hear their business, but I didn't make a point of listening in.
These are good, hard-working, decent people who care about wildlife in the area and are giving back to their community and the province and, for that matter, the world as a whole.
It reminded me a great deal of where and how I grew up, and I am grateful for that, too. 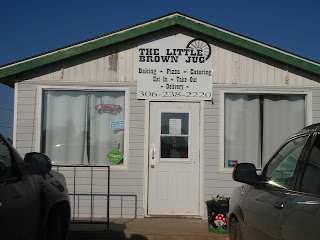 We arrived back home late Friday after two wonderful weeks in the province next door.
Saskatchewan has a great deal going for it with respect to nature, especially birds, and this was our two week birding tour.
We saw owls and ducks and geese and lark buntings and horned larks and pelicans and many, many others.
I am grateful for all of it.
One of the best things to do when away is find the little places, the restaurants in the small towns where the locals go. Part of that is discovering menu items unique to the area, even to the eatery.
One such delight was the Harvest Moon Cafe in Val Marie, SK. One of the desserts on offer was fried saskatoon perogies served with ice cream.
Who could pass that up?
Not us.
It was very tasty and for it I am grateful 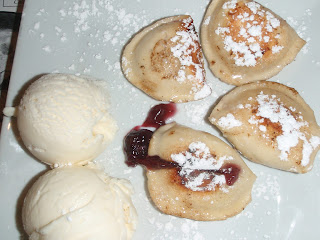