I've received two personalized rejections from publishers lately and I am grateful.
This is not so common.
They each contained suggestions for the work. One pointed out structural difficulties while the other noted some missing words, some awkward sentence structure, and suggested the work needed reworking.
This is wonderful.
The editor who sent the first rejection wished me luck and noted she was intrigued by my concept.
This is good for the ego. It means I've piqued interest.
The second rejection came from the publisher's desk and invited me to resubmit if I rewrite it.
This is great.
The feedback I have received helps me.
I'm running off a hard copy even as I write this as a third publishing house contacted me over the weekend asking to see the full manuscript.
It is my job to ensure what I send is clean and sensible.
I'm on it, and I am grateful.

Above is the entrance to the Temple of Kom Ombo. It's the only temple in Egypt devoted to two gods: Horus the Elder on one side and Sobek, the Crocodile-headed god on the other.

Most of our sight seeing was done either early in the morning before it got too terribly hot or in the evenings when the lights of the temples added to the sensory experience.

Gratitude Monday - We Are Warm

Our furnace quit the other morning. It was 66F in the house when we got up. In June no one cares about the furnace. In April, we care.
Mike made the call for repair at 7 a.m. and we were attended to at about 3 p.m.  It had been a very busy day around the plumbing shop. Many furnaces had chosen that very day to give up the ghost.

In our case it was the motor. Burnt out.
We'd had something repaired about six weeks ago and the repairman warned us something in the motor had been acting odd. We noticed that at times the motor sounded like it was working too hard. It sound like a car in second gear being forced to go 60 miles an hour.
We smelled an ozonish, burny kind of odor from the furnace from time to time and had complained about it about two weeks before the motor quit. My guess is it would still have needed replacing.

A new motor comes complete with some extensive housing. There is no way to just replace the motor proper. The rest of it comes with the package.
It's expensive.

Now what in the world does all this have to do with gratitude?
Plenty.
The furnace was fixed the same day it blew. In this country, that's big. I'm very grateful it was attended to.
I have a furnace that works and it's still having to warm the house. We've got snow and cold. 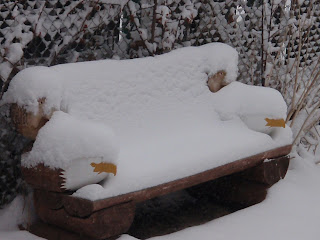 I'm grateful to be warm.
The shop called the next day to apologize for the upcoming cost. It was explained there was no other way and the nice lady wanted to spare us the shock of the repair bill. She had been directed by the shop owner to make the call.
That's good service and I am grateful.
She further noted that due to the cost the shop would only charge us 10 percent over its cost for the part.
I have no idea what the usual markup is. I do not want to know because as it stands now we got a deal, and for that I am grateful.

Photo-Finish Friday --A Bit of the Athabasca

This is a deep summer view of the Athabasca River from a lookout in the Sandhills east of Fort Assiniboine. We went there many times when I was growing up.
Back then it was fun to take a run and jump off the edge of the hill into the sand.
The trees have all but take over now all but obscuring the view of the hill, but it you cock you head just right you can still see the river and the riverbottom farmland.
Posted by Leah J. Utas at 12:30 AM 9 comments:

I want the sun to know I appreciate it.
We've had snow the last few days and it has been cold. It's good for my husband's work. It's good for moisture and all manner of other things, but it is spring, and that means melt.
Late in the afternoon yesterday the sun was out and warm and the snow turned to slush and then water.
I love the sound of melting, running water. It sounds like a promise made in joy
Here's a very short video of running water, courtesy the sun.


This is what we woke up to yesterday morning.

The sun came out, and I am grateful.

This is what you see when you leave Banff National Park heading east on Highway 11 a.k.a. The David Thompson Highway.
**
I strongly recommend clicking over to get the full screen. You don't have to, but it will enhance your experience.

snopes.com: Pensioners Should Apply as Refugees

If you follow the link you'll find the US and Australia and, according to FaceBook, Canada gives more to refugees than to pensioners.
It is false, and it is offensive.

I am so sick and tired of mindlessly sharing or forwarding nonsense like this.
When did we stop giving critical thought to anything?
Of course, the real issue isn't thinking; it's xenophobia. For all its apparent caring about our seniors it is thinly disguised hatred.
It's another take on how them furriners are taking all our jobs/money/ resources/air/space/food/ you name it.

Friends, the world is for everyone.
If someone wants a better life then they ought to be given a chance to get it, and if they need a hand up along the way good on us for offering it.
The true test of a nation or a person is how they treat others.
And remember, unless you are First Nations born, you are descended from immigrants or refugees. If such social programs had been available back then,  my bet is your ancestors and mine would have accepted it.
So stop the spit-flying xenophobia and appreciate the fact that your country is good and kind and willing to help others.

I am grateful for this photo of a Whiskey Jack. They don't come to town. We have to go out to the wild to see them. In this case the wild was barely 20 miles out of town, but it was still out.
Out is good.
**
The day was much bluer than indicated. This was 1/500 at f11 at 1100, for those who may be wondering. I play with film speeds and let the camera make up the rest. I am grateful for that, too.
Posted by Leah J. Utas at 7:12 AM 14 comments:

So starts one of the many walks in the Siffleur area. It's about a 90 minute or so drive from where I live. It makes for an easy day to drive out, select a hike, and be one with Nature.

#
I'm not sure why my photos from my Olympus have this fuzzy view. I apologize.
Posted by Leah J. Utas at 1:00 AM 6 comments:

Yesterday my husband and I went for a drive.
We went west to the mountains.
We took our time and took many photographs.
We went as far as the Columbia Icefields Parkway, about 100 miles, and turned around.
We stopped at Siffleur Falls on the way back and went for a hike.
We had a turkey dinner at lunch time in Nordegg.
We saw a robin, many deer, many sheep, a hawk, two bald eagles, and four bluebirds.
It was a good day and for it I am grateful.