Photo-Finish Friday -- Spirit of the Air in Wood 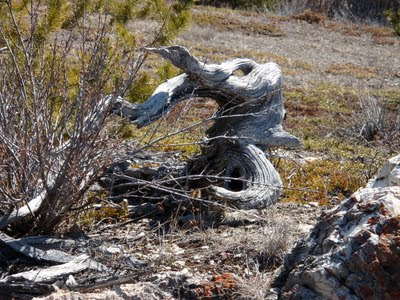 I found this root during our walk in the mountains on Easter Sunday.
To me it looks like a goose spirit captured in the wood.
What do you think?
Posted by Leah J. Utas at 1:07 AM 14 comments:

What would happen if you said no?
If you were asked to do something that you didn't want to do,  or to buy something you weren't sure you wanted to buy, could you decline?
I can.
So far, nothing bad's happened.
It started out many years ago when I noticed that people said yes to requests then wondered how they ever got into this mess. Many such conversations included the phrase, "You hate to say no."
Maybe so, but if you hate yourself for saying yes why do it?
Let me give you an example. Years ago there were some tee shirts left from some event concerning the local National Historic Site. I've forgotten what it was so I apologize for the lack of detail. My boss was involved in the organization and blustered into the office one fine summer afternoon asking who'd like to buy one.
I said I wanted to think about it.
He said the offer was only open today.
"Okay," I replied. "Then no."
He was a bit taken aback, but  knew better than to pursue it.
Many others in the office said yes and several were later heard to mutter, "You hate to say no."
Hate it?
I freakin' love it.
Why would you buy or do something you don't want to do? It makes no sense to me. When you say yes out of  obligation, the asker owns you. Plain and simple.
Yeah, you're being kind and good and helpful, and frankly, you're losing a bit of yourself every time you do it.
For me it works both ways. If I can say no to you, then you can say no to me. I don't mind. Hell, I respect you and your backbone.
I'd rather hear an honest no than a shallow yes because then when I do get a yes I know it's meant.
Saying no when I don't mean yes has been my practice for so long I've forgotten when it started. It can be learned. It takes practice, but it is worth it.

Progress Report -- It's All Good


It's good to get away from the computer.
I've been contacting literary agents lately as well as working on a synopsis of my manuscript. Many agents want one sent with the query letter so those who do are still to be contacted.
To date I've found 50 -60 agents and emailed a query to 14 of them.  I've had five rejections and one request for the first 50 pages of the manuscript.
In my view I'm doing okay for now.
Still plenty of work ahead of me and there are more agents out there. But for now I'd say it's all good.

Getting away from work is a good way to get some distance from it on many levels. It's even better when away takes me out west to the Rockies for a hike. I haven't been doing much hiking in the past few years due to a nasty bit of business with my heart.
The hike was a good way to test how I'm doing especially since I've cut down on the beta blocker dosage.
We took it slow and I rested frequently, but only for a few seconds at a time. The incline was gentle in most places. We had one steep slope only because we were skirting a herd of Bighorn Sheep napping in the sun on a hillside. We didn't want to disturb them.

It was good to be out in the fresh mountain air again and get some exercise.
The sun was shining, the sheep were napping, the butterflies were flittering about, the prairie anemones (crocus) were opening their fuzzy purple heads, and we had a wonderful hike.
I came back refreshed and ready to tackle the synopsis and fix up the query letter a bit. I realized as we were coming back down that I should mention I maintain a blog.
As noted earlier, it's all good.
Posted by Leah J. Utas at 2:13 AM 15 comments:

Signs of Life on the Mountainside 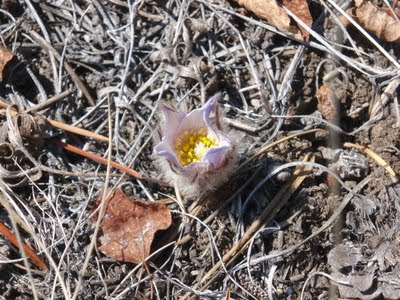 We saw a few crocuses during our mountain walk on Easter Sunday.
These are my favourite flowers. They're pretty and they confirm to me that spring, and a new warm season of life, is well and truly here.

They're properly  known as a Prairie Anemone, Anemone patens, but we know them as crocuses and that's what I call them. 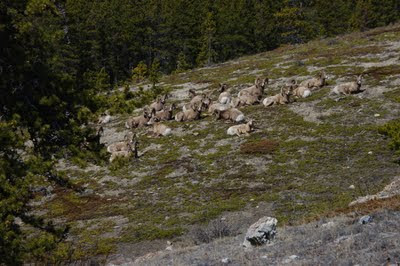 We went for a walk in the mountains yesterday and came upon a flock of sheep taking a sun nap on a mountainside.
It was a wonderful find. We carefully skirted around them so as not to disturb them.
I'm grateful for the walk, the day, and the sleepy sheep. 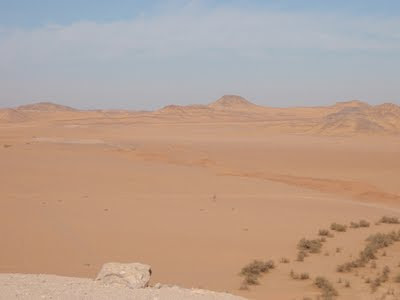 It's another day. Possibly like any other day.
Possibly not.
And that's the beauty of it.
No matter what else the day turns out to be, it is another day and that is reason enough to be thankful.
Posted by Leah J. Utas at 6:21 AM 13 comments:

Photo-Finish Friday - A Peaceful Place in the Country 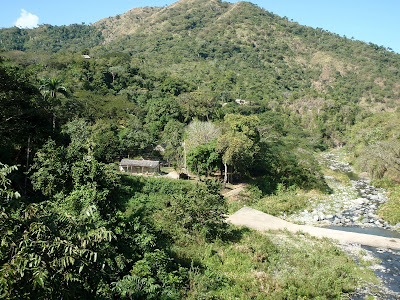 We woke to more white falling from the leaden skies. 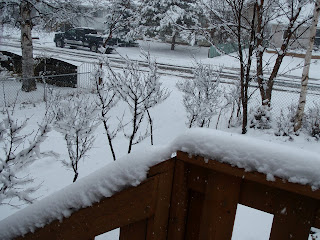 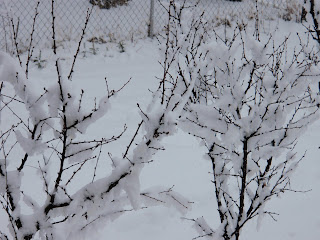 Please will someone guide us to this? 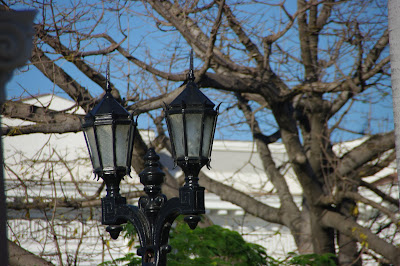 The Rhubarb is Up

The first red shoots of rhubarb are poking out of the muddy ground in my garden.
Yay spring!
Posted by Leah J. Utas at 5:37 PM 13 comments:

Our current bedtime story, translated from Finnish, is about a fellow who wanders Finland with a bunny.  He hits it with his car, rescues it, and walks away from his life with the hare at his side.
It's wonderful and funny and a joy to read.
Two from The Year of the Hare by Arto Paasilinna (Penguin 2010):
"Hannikainen had a knapsack on his back; a hare's head peeped out from under the flap.
Vatanen rushed over to them, grabbed the knapsack from Hannikainen's back, undid the cord, and welcomed the hare into his arms."
#
I've spent the last few days or so trying to craft a query letter and synopsis for Dead Broke.
I've got the bare bones of both. It's going to be several more days before I have something I'm content to let sit for a while.
Here are two from the query:
"Eddie Corbett, shot dead over a gambling debt, wakes up on the wrong side of the afterlife. If he wants a new life he has to earn it by doing off-label jobs for God like hauntings and sending people to their deaths."
#
Thanks for reading me.
For more or to get in on the fun, please see the Women of Mystery.
Posted by Leah J. Utas at 1:46 AM 16 comments:

Gratitude Monday -- How 'bout those Interchoobs?

The Internet.
I am grateful for it.
Most of the reasons are obvious. It makes communication fast and easy.  I can put my opinion and pictures out for public consumption and get near instant feedback.
It allows me to have conversations without having to go out in the world, and it gives me the chance to think before I write.
Not that I always do it, of course, but I have the opportunity.
I'm looking for a literary agent now. The search is easier from home on the computer as there's information available about who is good vs. who is a scammer.
With Internet comes email. Many agents accept email queries which saves time, money, and trees.
It can also be a huge time-sucking waste, but we have the option of walking away.
Whatever else it is, it makes navigating through huge reed patches of information, misinformation, and disinformation that much easier.
Posted by Leah J. Utas at 3:47 AM 16 comments:

Photo-Finish Friday --Close to the End of the World 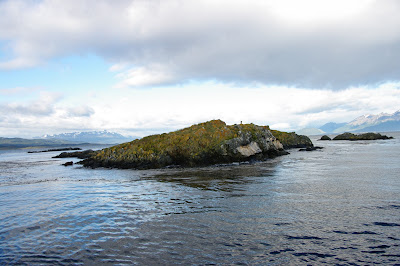 Pie Month, or March as normal people call it, is over and I am grateful to call it a success.
We had pie in the house available for the evening meal every day for the entire month.
It got my creativity stirring as I looked for new ways to make old favourites.
It lead to assorted streusel toppings including one with pecans and an apple pie with a baked in rum sauce.
I made pot pies and pizzas as well. I tried to replicate Turtles (TM) in pie form, and I even followed a recipe once.
Well, mostly.
It was this one and without a formal declaration of Pie Month and encouragement from the Bag Lady I may not have ever tried:

A commitment to pies led to this:

and it gave me valid cause to come up with this:


It was fun.
I got to invent stuff.
And I got to eat all my experiments.
I'd call the month a success.
All that aside, I'm grateful it's over.
Posted by Leah J. Utas at 3:21 AM 20 comments: Bananas growing by a house in Santo Domingo, Cuba.
Posted by Leah J. Utas at 3:58 AM 13 comments: