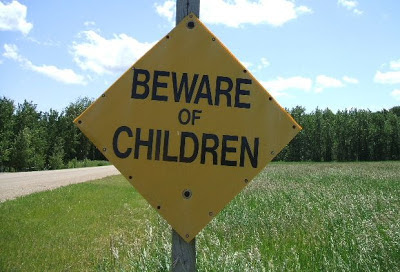 
I am grateful for this blog and for Facebook. Without them many of my photos be gone forever.
Last January we lost the hard drive. Nothing was recoverable. Anything that wasn't anywhere else lived only in my memory.
All big trip photos get backed up right away. Most of my manuscripts are in hardcopy and all were on some type of disk.
This left some general pictures, camping trips, scenics, some playing around on the camera that I did with my Yellowstone photographs.
It hurt, but I could live with it. I'd certainly learned my lesson as regards backing up everything.
About a week ago I went looking for a photo from our Cuba trip to post on Friday.
Nothing.
I swore I backed it up on a flash drive.
It wasn't there.
I further swore I had it on disk.
It wasn't there either.
That said, I will still swear to it.
Blogger has the pics from the blog on a file one can get at by going to the post a picture feature. I saved more than 400 of them to my computer the other day.
I wish it had all of them, but I can recall some photos I've posted that were not there. The two I can think of were scans of prints so I won't be worrying.
For as happy as I am to have them, they've lost a few steps in quality. They get fuzzy when enlarged to a decent size.
I'm still grateful to have them.

FaceBook, for as much as I may grumble, will send a download of everything.  I am so grateful for this as it was easy to put them on to my computer once I sorted out what to do.
It was nerve-wracking, I admit. It comes in a zipped file which means nothing to me.
I thought I was going to have to open each one --more than 1200--and save it.
Did I want to extract the contents?
Maybe.
I tried one.
It opened in my photo file with no problem.
I swallowed hard and did the whole file.
Success.
Exhale.
They blow up fine.
I'd put many of my travel pics on FaceBook including what appears to be all my Cuba photos.
They've been backed up on to an external hard drive and a flash drive with the notation they are rescues as opposed to originals. I want to be able to tell the difference when I fire up one of those drives and find my original Cuba files waiting.
Posted by Leah J. Utas at 1:30 AM 16 comments:


These are Rheas. We saw them at an estancia in Uruguay.
Posted by Leah J. Utas at 1:00 AM 7 comments:

Gratitude Monday -- For the Birds 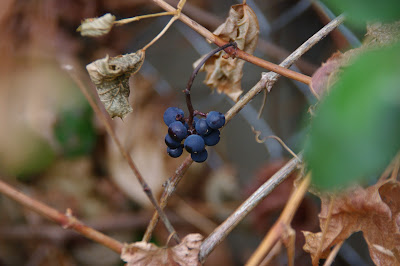 We have all manner of interesting plants growing in our yard. Those who can grow plants are said to have a green thumb.  My husband has two green hands.
Among the foliage we have are river grapes, Vitis riparia, and this year they produced.
We didn't know as they have so many leaves the fruit only showed when the leaves died.
We tried a few and they were okay. The seed is pretty big so it's a bit of an effort to eat them.
Husband picked a few then decided the birds would enjoy them more than we did.
I am grateful for this bounty, for the chance to try them, and for being able to offer the birds a fruit course this autumn.

Photo-Finish Friday -- A Couple of Guys 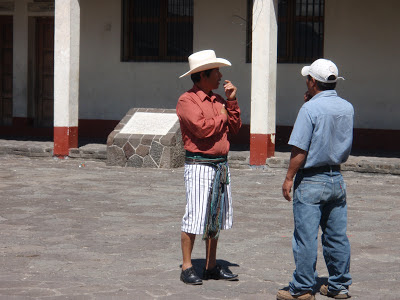 Two Guatemalan men in conversation. The fellow on the left is in traditional clothing. 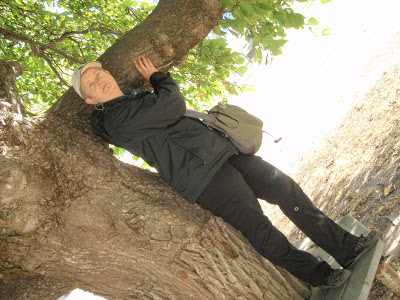 I love this tree.
I am so grateful for the time I had with it.
Knotty and gnarled and full of character, this American Elm in Kaslo, B.C. reached into my heart and stayed.
I wanted to climb up its magnificent trunk, stretch out on a strong, stout limb, and never come down. Photo-Finish Friday - Along the Nile 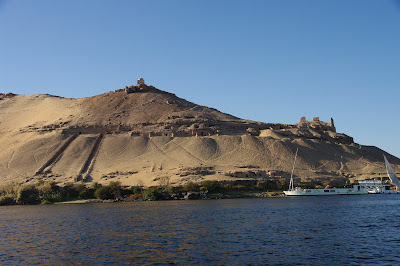 One of the sights we saw during our Felucca ride on the Nile.
Posted by Leah J. Utas at 12:30 AM 11 comments:

Cooking for the Writer's Soul


Cooking is a writing exercise one can eat.
A bit much?
Let me explain.
Cooking let's me see firsthand how various ingredients go together. Do they work together for the common goal of a tasty meal? Or do they make a complete hash of my efforts, falling apart, foul-tasting, burning, gluing up the works like a character who does not fit in no matter what I do, or simply tasteless?
I can experiment with spices and flavours, try different vegetables, or flours, or new ways to hold a creation together.
It will work or it will not.
If I'm lucky the thing that didn't work can be played around with and made into something serviceable, much like editing a story. It can take several passes to make a story readable just like it can take many experiments to make a new dish palatable.
I'm gluten intolerant. This means I've been learning how to use alternate flours in baking. Lately I've turned my attentions to nutfluff, nuts like almond, brazil, walnut, pecan, and hazelnut ground to meal or into flour.
They're tasty as all get out, but don't hold together well without significant help. The help I've been trying out is psyllium husks. Please go easy at first if you try this as it is a colon cleanser.
That said, it works wonders. It makes the dough stretchy and fluffy. To work in a writing metaphor I suppose it's like adding in an interesting subplot to make the main story more substantial.

Cooking lets me work with my hands which in turn helps me think. It is both mindful and mindless.
Mindful in that I often decide to add or delete ingredients as I am cooking. Like stories, many of my cooking creations have started with "I wonder..."
Also, I am not big on measuring. I consider recipes a jumping off point, nothing more. This makes me mindful of each ingredient as I have to scrutinize it in the spoon or the cup until I can declare, "Yeah, that's about right."
Mindless in that I can think about several others matters or nothing at all except in those moments of preparation that require attention. I'm reluctant to admit it, but some of my writing has been downright mindless, too. 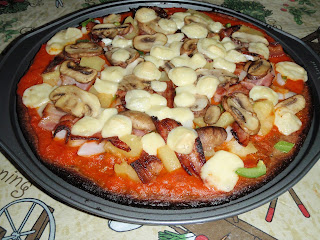 I used walnut and hazelnut flours with chickpea, flax, and oats for the crust.
The sauce was two tomatoes, a bit of olive oil, a dash each salt and sugar, basil and oregano.
I cooked the bacon in a Panini grill on medium until it was just done, removed it to a paper towel, and threw the sliced mushrooms on the grill in the bacon grease for a few minutes. Because much of the grease drains away, I added a bit of it back for the mushrooms.

The crust was 1 ½ cups of flour: ¾ cup of walnut and hazelnut meal and ¾ cup of mixed chickpea flour, ground rolled oats, whole rolled oats, and ground flax (1 tbls of flax).
1 ½ tbls of psyllium husk as gluten substitute
½ tsp salt
1 tbls sugar
¾ cup lukewarm water to which 1 tbls fast rising yeast is added. Leave to sit for 10 minutes
1 large egg
½ tsp vinegar (as dough enhancer)
3 tbls softened coconut lard (butter or margarine is fine)
Mix all the dry ingredients together while you wait for the yeast to fluff up in the water.
Add egg, vinegar and yeast water when it's ready and then the lard.
Mix thoroughly. Cover and set aside for about 25 minutes or until the dough is doubled. It will be moist like really thick cake batter.
Most alternate flour crust recipes call for 1 cup of water. This amount worked for me.
Spread batter on solid-bottomed pizza pan. Cook at 425F for 15 minutes.
I let it cool and then set it in the fridge until I needed it.
I used homemade tomato sauce, cubed soya cheese, bacon, mushroom, onion, pepper, and pineapple on mine. 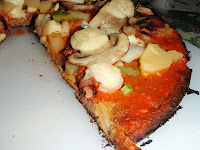 As an experiment, I cooked it at 500F for 10 minutes. It was fine, but like a story that gets shopped too soon, it could have used a bit longer in the oven.

*ETA - I see I have metaphor/similie issues. Sorry. I do know the difference, but often not until later. I'd change them, but it's a mistake I made and I will own it.


It's that time of the year again:  Banned Books Week
It's time to be subversive: Read a book or 100 that someone somewhere decided was inappropriate.

What a sad joke to perpetrate on an open-minded populace.
Our world has evolved to the point that one complaint about a thing, be it a book or an expression, or an activity can get it removed from public consumption.
This is wrong, appalling, and comes from a base of fear as opposed to reason.
I'm all for complaining when it's necessary. It's about the only way things change.
But when one complaint comes in and it is acted on rather than sticking with what the majority wants, then it bothers me. If a thing is to be changed, let it come from a groundswell of opinion, not one whiner with hurt feelings.
But, back to books.
I've read many of the books on the list.
Lolita should be required reading for Nabokov's gorgeous use of the language.
Banning The Satanic Verses did Salman Rushdie a favour. It made people want to read it, myself included. While reading a book is never a waste of time, that was close. (NB the whole fatwa thing is bad.)

It's a free country and we should be free to read what we want and form our own opinions about.
That's the other  problem with book banning, some one else's opinion is being forced on us. I don't like being told what to think, and I especially don’t like being deprived of materials which can be used to form an opinion.
Let everyone else and me be free to read as we please. 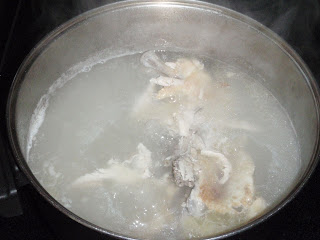 It doesn't look like much at this stage.
It's a turkey carcass from the depths of the freezer on high simmer on the stove.
But it makes a fine and tasty stock for soup and for that I am grateful.
I am also grateful that it takes limited effort to do it and making soup stock ensures that no part of the bird gets wasted.
But more than anything else, I am grateful for the wonderful soothing, enticing smell of the stock on a cool, autumn day.