The noble whiskey jack  rests above picnickers awaiting its chance to swoop down and steal their lunch. 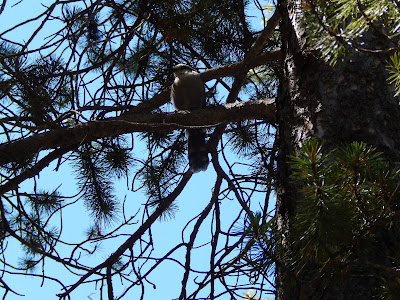 We've been eating garden veggies lately and they are wonderful.
Both my husband's parents grow gardens and they are very good about sharing the bounty with us.
Recently we've had new potatoes from his mom along with zucchini, onions, even cucumber.
His dad has given us tomatoes and lettuce and for the last several years he has provided us with beets and carrots. He has supplied us with potatoes almost year-round.
Further, he keeps chickens and has kept us in eggs for the past several years.
We grow a few things here, too, and I am grateful for it. We have spices mostly along with a few vegetables, but it is the produce from the in-laws' gardens for which I am grateful.
Posted by Leah J. Utas at 8:05 AM 7 comments:

A Strange Encounter, A Wanting Memory

One of my earliest memories takes place in our barn. It was built when I was about two and I do recall one scene of it being built. It was a great place, 100 feet long north to south with the north end the closest to the house, 26 feet high at its peak with a huge hayloft.
But this memory takes place when I was three.
I was in the barn one afternoon. I went there often whether anyone else was there or not because it was a great place.
I am standing by the north end near a door to a room dad had intended to use for a chop bin. It had a window that was a simple opening like a door. It remained closed.
The boards on the barn wall are bare though in my mind I see whitewash. I think there was some partial paint, but I don't know.

What I do know is I was not alone.

Standing in front of me is a tall being. I get the feeling of female, but I honestly cannot say. She has high cheekbones, pale skin, and is wearing a white robe with wide sleeves. Out the sleeve end is a thin arm ending in slender, long fingers.
Her pale skin, and in my memory the white robe she wears, glows white gold.
She reaches past me, above my head. In her hand she holds a thick grease pencil, such as we used to mark the pigs that were ready for market.
She is drawing on the boards by the door to the never-used room.
I am agitated. I do not want this.
The memory ends with me saying, "You don't have to do that. I'll remember."
I have the feeling I used to see this being often.
I have not seen her since that day and neither have I ever forgotten that scene.
And neither have I forgotten what she drew on the barn wall. I used to see it when I went in the barn. It scared me.

She drew a clown.

I was terrified to walk by it as I knew it would jump out and get me.
If I went in the barn with dad I made sure he was between the clown and me.
If I went in alone and dad was in the barn I edged as close as possible to the opposite side. I kept my  eyes on the clown.
If there was no one in the barn and I wanted to go up to the hayloft to sit in the sun, as I often did, I walked around outside to the south end of the barn where the stairs were. I would not go past that clown by myself.

He, I get the feeling of male from it, did not always appear.
I recall one day walking in the barn, seeing him, and wondering "Why doesn't daddy paint over that clown?"
I made up my mind to ask him to do it. I walked perhaps 30 feet to where dad was cleaning out a pig pen and forgot.
I'd remember from time to time, but never in time to ask him to do it.
I have photos of where I think the clown ought to be.
There is only bare board.

I told the family once about it and it was suggested it was a dream.
No.
It happened.
It is real.
I have never forgotten the being who used to visit me when I was very young. One day she told me she could not come to me anymore. She left the clown for me to remember.
I wish I remembered what it meant.
#

I may have written about this before. If so, I apologize for the repeat.

I am very grateful I know how to get rid of attached entities.
I am grateful I know such things can happen and how to find them on me, but getting them off me is the best.
Spirit or entity attachment happens. I am not in any way talking about possession of any sort. That's a whole different kettle of butts. I haven't the training to go near it.
But attachment happens when a spirit, or entity if you will, sees a weak spot in your energy and latches on. It can happen for a variety of reasons  and manifest in a number of ways.

I'd been feeling out of sorts recently for no obvious reason. I was unable to think straight, lost the fun feeling of writing and creating, and more telling than anything, I was enjoying keeping the house dark.
For the latter, it's been hot here. One must close the windows, draw the blinds, close the curtains. Commonly keeping the bedroom curtains closed makes me claustrophobic. For the last few weeks it hasn't bothered me much. I was even liking it.
That's not good.
This, more than anything, made me think I had a hitchhiker.
On Saturday evening I put myself in a moderately relaxed state, called in the Archangel Michael because it is always good to have an expert handy, and scanned from the top down.
Unfortunately, the phone rang while I was working on some deep gray spots near my abdomen. It disturbed me enough I had to quit, but I had found a few extras on me and some entities hanging around.
For instance, my dad (or a spirit posing as him) was hanging around me. He kept saying, "There's something you don't know" and looking quite grim and concerned as he did it.
After trying to reason him away I finally told him, "Of course there is. The stuff I don't know far outweighs the stuff I do know. Whatever this is it is what I have decided to experience and I will have it."

Yesterday I finished the job. I unplugged the phone. My husband took a nap. I spent a bit more than an hour at it and I think I got shed of everyone.
Afterward I brought in light to cover and shield me and asked for protection.

I feel lighter, in both the not-dark sense, and the physically not as heavy sense.

It's a good feeling and for it I am grateful.

I won a little bit of money in the Lotto 6/49 Saturday and for it I am grateful.
Here's what happened.
I asked the Universe one night late last week how to get some money. I haven't earned anything from writing for a while now so thought it would be a good idea to bring a bit in.
Generally, when I address the Universe I use God as way to sum it all up.  It's spoken shorthand for Universe, guides, helpers, angels, archangels, and all the beings who love me and work with me in the light of God for the highest good of all.
I figure if God's the CEO of the Universe, then using the word covers it all.
That explained, I asked the Universe for a way to do it and to give me a sign. I further asked the sign be obvious as I can be rather dull-witted at times. Then I went to sleep.
The next morning I awoke to a vehicle parked blocking our driveway. I went out to note the make, model, and license plate to call it in later.
The plate was TAK 649.
Take 6/49?
It had to be a sign.
I bought a ticket and found out yesterday it won $5.
During my request I noted to God I would say thank you when I won so:
Thank you, God, for my lottery win.

We found this tree at Gooseberry Lake Provincial Park a few weeks back.  This branch is so inviting I'd happily go back just to stretch out along it for a few hours. 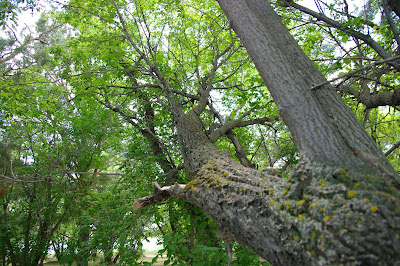 Gratitude Monday -- Out With The Old

I'm so grateful I've finally gotten around to throwing away documents and whatnot that I no longer need. Some of those papers I haven't needed in 30 years.
A few weeks ago I went through several containers to see what I no longer needed. I don't know why I hadn't done it earlier, and neither do I know what prompted me to finally get at it.
The important thing is I did it.
I had four grocery bags of old taxes, cards, and in one stellar example, all my hard copy book rejections.
Sending off birthday and Christmas cards to recycling can be difficult, but rejections?
Yeah, they were tough, too, but they absolutely had to go.
Keeping around nearly 170 examples of my failure serves no one, least of all me. I don't need a piece of paper to remind me a book did not come out.
In other glorious examples I found my camera insurance from 1985. It cost me $50 a year. Car insurance from the same era was $199.
I had tax returns and gas receipts from the eighties taking up space in my house and by extension, in my life.
They are shredded and ready to take away to recycling.
And finally, 14 years after leaving the newspaper, I disposed of my notebooks. I'd been meaning to do it for several years and never got to it.
Yesterday I did.
The emotional impact of getting rid of the papers and the energy they held from the era of their use hasn't settled on me yet.
I expect I need a bit of time and so I will wait, but for now I have room in my home.
The old is out. That means there's room for the new, and for this change I am grateful.

Labels: old papers, out with the old, recycling

We spent Canada Day in Banff National Park doing a few hikes and then having a picnic at the end of a side road at the top of Bow Pass.
There's a hike to do that takes a person up the peak at the center of the photo.
If you look above the tree line you can see a snow pack.

I point this out because Mike hiked up there while I waited.
I took the following pic of him which, by some oddness, looks like I am shooting downward.
It's weird, but I like it.
If anyone has an explanation I am all ears.