Photo-Finish Friday -- Warm Purrs To You 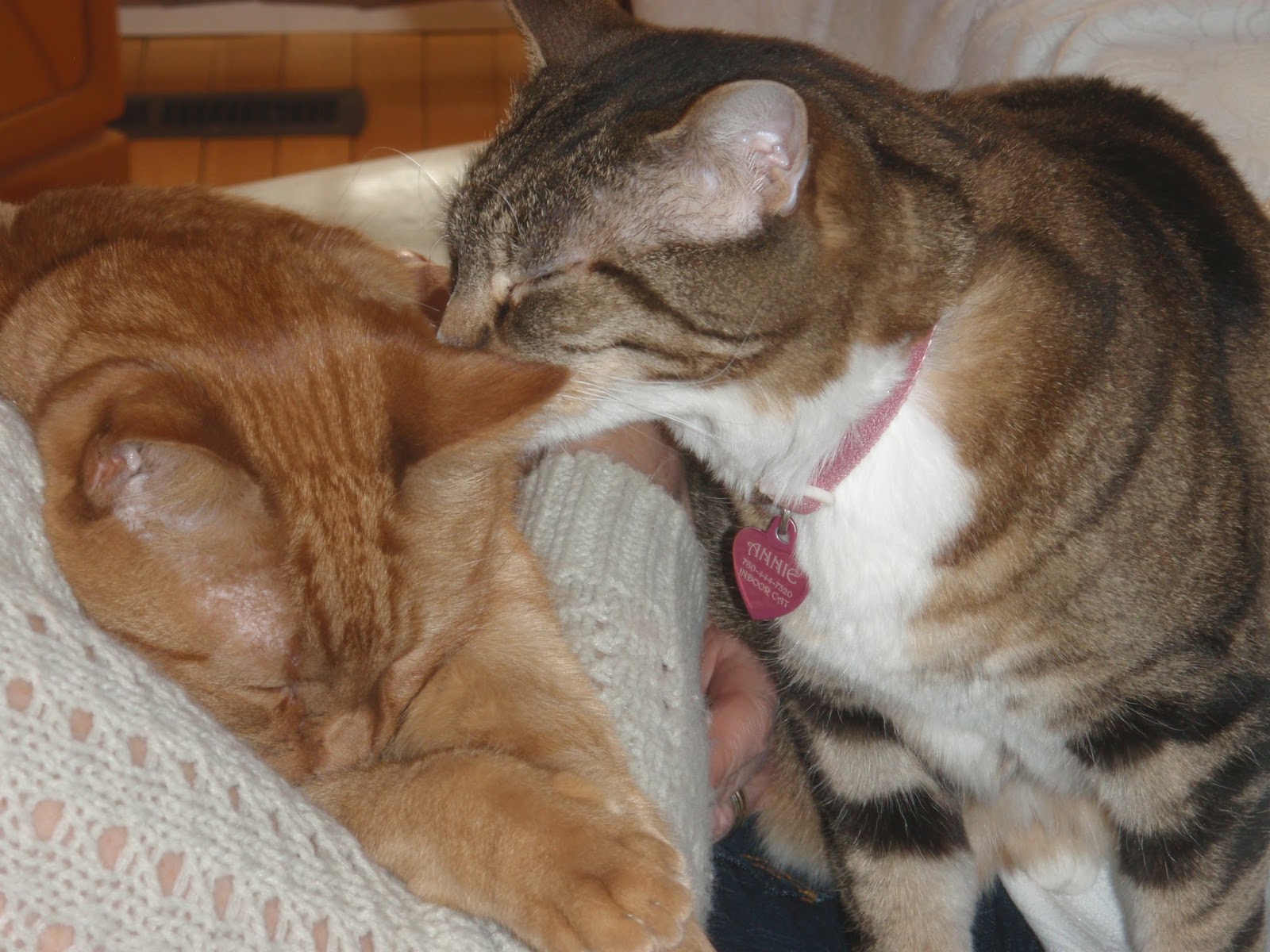 Katmandu, left, and Annie, own our friends Bob and Sylvia.
These kitties can be most quiet and cuddlesome.
Posted by Leah J. Utas at 12:30 AM 6 comments:

We had our annual late season Christmas with friends Bob and Sylvia this past weekend.
It was our turn to go to their place in Edmonton and it was wonderful.
Another friend, Gwen,  joined us for dinner and brought dessert, one of the best apple pies I've had the pleasure to know.
Later we played Cards Against Humanity and had a blast.
It takes a certain twisted mindset to enjoy this game and for it I am well-equipped.  Play it with like minded souls.
We did a bit of food shopping and stocked up on Kalamata olives among other things. We went to a very special liquor store that will have what you want unless it is not available in Canada. We enjoyed a lovely walk on Sunday. 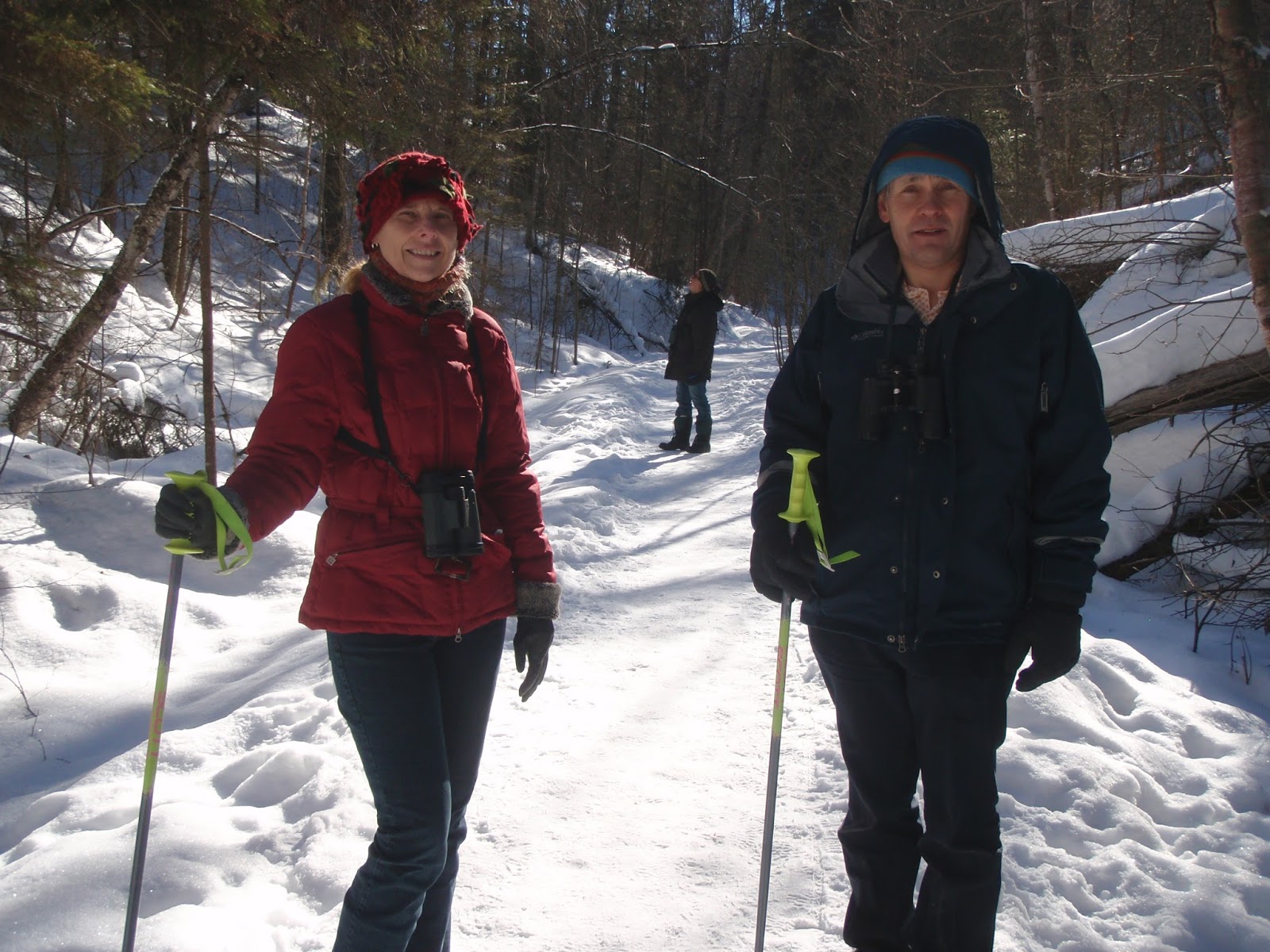 We had a wonderful time with wonderful friends and for it I am grateful.
Posted by Leah J. Utas at 10:21 AM 11 comments:

Thursday marked the beginning of  the Year of the Sheep or Goat, depending who you ask.
Out of respect for ovines and caprines everywhere I've decided to honour both. 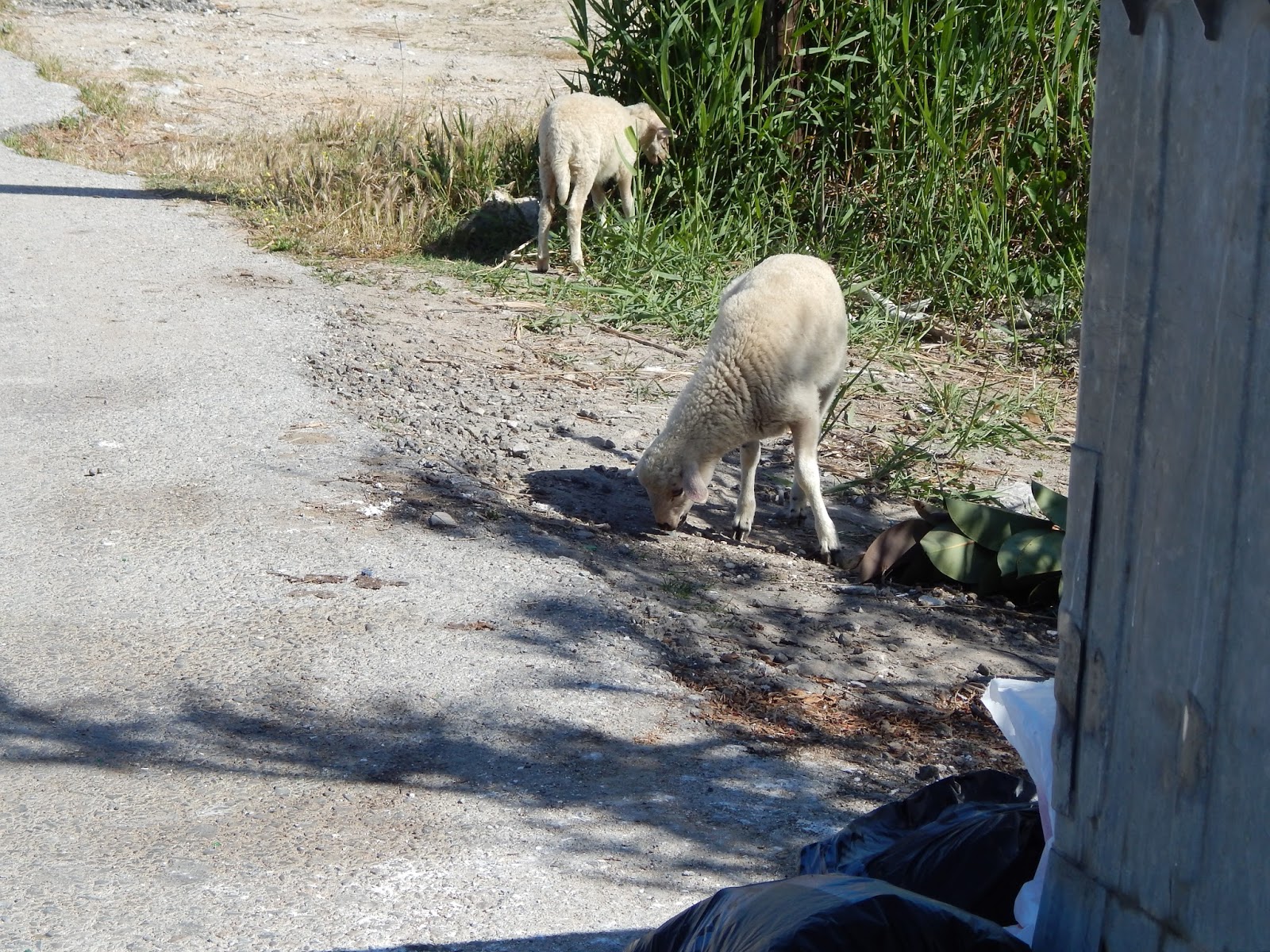 These sheep are grazing in an overgrown area within the boundaries of Naxos City. 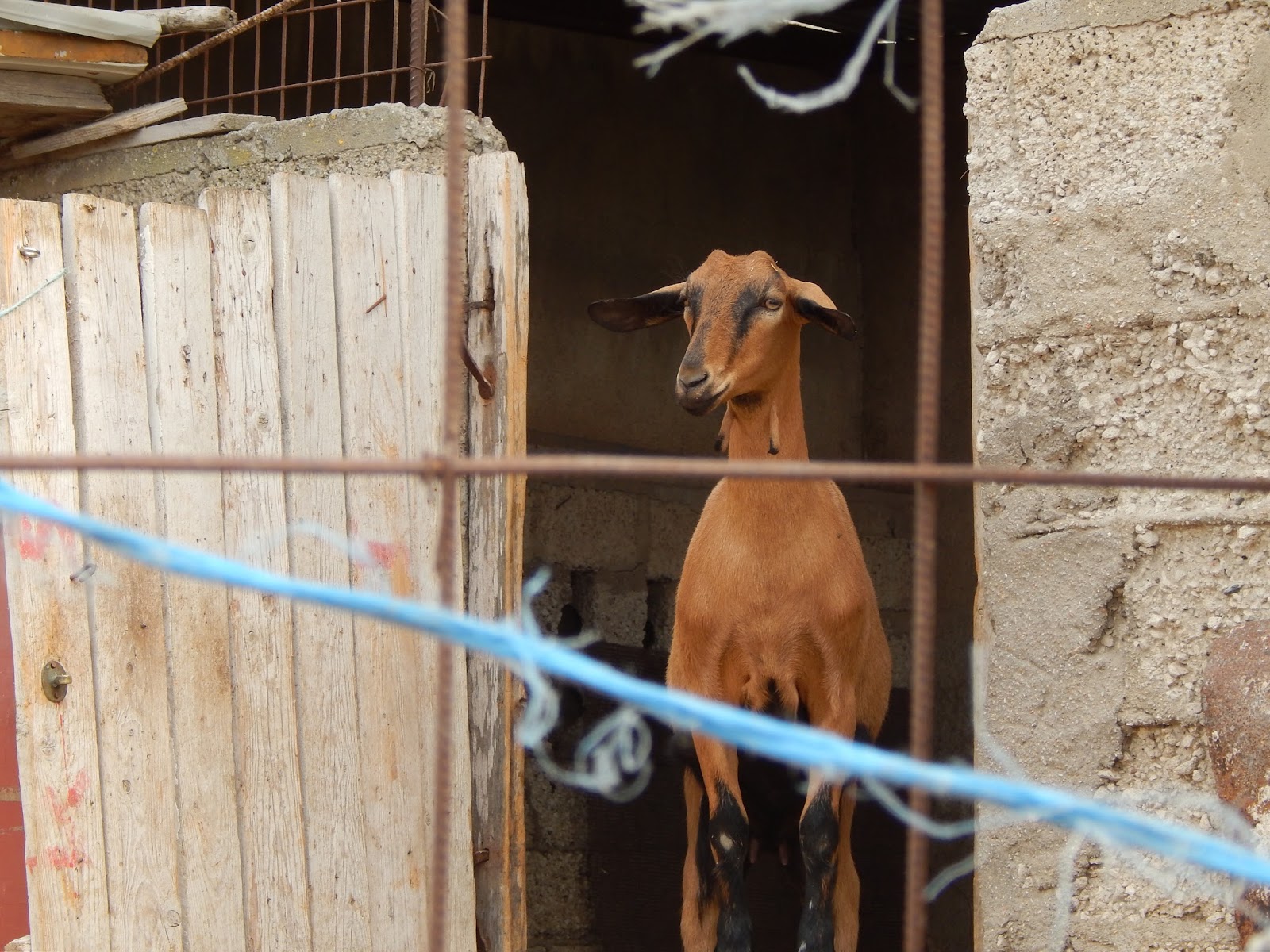 While this village goat on Santorini surveys her domain.
Posted by Leah J. Utas at 12:30 AM 7 comments:

That Word Never Used To Mean What You Think It Means


Back in the heady days of my youth "epicentre" was a geological term referring to the point on the surface above where an earthquake starts, and that's all it was.
I miss those days.
The Random House Dictionary defines it as: "A point, directly above the true center of disturbance, from which the shock waves of an earthquake apparently radiate."
(The Random House Dictionary of the English Language, The Unabridged Edition, c. 1983, and for the record, also 1981,1979,1973,1971, 1970, 1969, 1967, and 1966.)
It is the only definition offered.
I wish it had stayed that way.

Today, online dictionaries offer a second, common use definition of  it where it is used to mean center.
It makes my soul hurt.
The prefix 'epi' is used in words borrowed from Greek and means upon, on, over, near, at, before and after. I suspect "epi" is tacked on these days as a simple modifier of center as if in some way it makes the word bigger, stronger, and more important.
Like the hard copy dictionary I consulted today, I come from a time where access was not a verb, there was no reverse engineered verb root of liaison, and literally meant literally.
Language evolves, and its a good thing, but I refuse to always evolve with it.

Gratitude Monday -A Gratitude Round Up

I have several areas of gratitude today.

On Valentine's Day I was taken out twice, brunch and dinner.
It was a good, good day. I even had chocolate cake and ice cream at one point.
Also, I had toast and coffee. Now for most that's a regular daily event. But it's rare for me as I am gluten intolerant. I love the combo and miss it, but I do know better than to indulge too often.  Further, when I do have gluten I usually spent my gluten allowance on dessert. On Saturday I had both.

I have the flu. I was expecting it and it hit me Saturday. Fever, chills, achy places,  all the usual suspects. I had plenty of cuddle time with a heating pad  Saturday night and for said pad I am grateful.  Though I still have it I am much better today. I may even be able to read.
The reason I expected it is  my husband has it and he is sicker than me.  While I am by no means grateful he is ill, I am grateful I am not as sick as he is and can get about as needed.

The honey and apple cider vinegar I've been drinking helps quite a bit and I discovered the other night that a hot toddy with scotch and honey is really quite nice.

I am browning a beef bone in the oven right now to be made into soup. I like soup anyway and it is a comfort when ill. I am grateful for that, too.

Gratitude is everywhere, it is just a matter of knowing how to see it.

Photo-Finish Friday -- Moonlight on the Mediterranean

Gratitude Monday -- I Remember This Edition..


I remember this night.
Our television, a Fairbanks Morris cabinet model, was acting up. By that I mean the commercials came in clear as a summer day, but the shows came in as static and snow. We could hear, but we could not see.
We went to the neighbour's house for this. Steve and Mary William's daughter Lorna and my older sister we best friends. It was logical we would go there.
I recall being there and seeing The Beatles and for all of this I am grateful.

The problem with my newer model Panasonic dvd recorder turned out to have an easy fix, and for it I am grateful.
The problem was its reluctance to read the big deal Panasonic RAM discs. I prefer these discs for a variety of reasons including they last a great long time. But they are a precision item and there's no margin for error when it comes to them being used.
A few years ago the machine started making funny noises when I'd load one or after a power interruption.  I heard whining and grinding and a few other noises that were unsettling at best.
It read any other brand of disc just fine.
I ran an cleaning disc through that I used for  my CD player.  It did nothing.
I kept opening and closing the door and finally the disc was read.
I knew enough to leave things alone until power failure forced me to play with it again.
Last year it did. I found a forum where a similar problem was described and solved. It said the spindle that holds onto the disc was dirty and offered cleaning methods. I tried the simple, non-invasive method.
It didn't work.
But I eventually  got the machine to read the disc  just by  opening and closing the disc door.
Then a few weeks ago the power went off and with it, my patience. I tried a few times to get the disc read, gave up, and put in a cheaper disc.
I went back to the forum and read what to do. I took the main cover off it and cleaned inside, then debated whether to pop the lid on the disc drive and clean the spindle.
I decided to wait. I had a nagging feeling to try a cleaning disc again. Said disc only cleans the lens, not the spindle, but it certainly wasn't going to hurt anything to try it.
Also, it nagged a bit that a simple power failure messed things up. The disc hadn't been moved so it should have stayed grabbed.
I wanted a new cleaning disc. There not so easy to find, but they do exist.
After using it I tried the RAM disc. It read it fine.
I am grateful as all get out, but I must confess I was looking forward to popping the drive hood and cleaning the spindle.
I can't help but feel a bit cheated.