I tried to paste in the video proper but it wouldn't work. Here's a linkie to a former posting.
Enjoy.

Here's my sad attempt at embedding:

Two-Sentence Tuesday -- It's Coming Along

My rewrite of BloodLovers is coming along. It's slow, but I managed to get at it for a while each day. It all adds up.

Here are a recent two sentences:
"He said it was an animal. Ain't no animal I ever heard tell of do that to a man."
#
Reading has taken quite a beating lately. I'm not sure why. I love to read. It's seems these day, despite the lengthy daylight and me getting up between 5 a.m. and 5:30 a.m., there isn't enough time. I hope that changes soon.
Yesterday I picked up the guitar after letting it sit idle for much too long. It wasn't keen to be tuned right away and I ended up playing it until it decided that tuned was better.
I don't have much of an ear for music so an instrument has to be way out of sorts for me to notice. Yesterday, I noticed.
Here are two lines from the song Long, Long Ago  by  T. H. Bayly I played once the strings got sorted out properly:
"Tell me the tales that to me were so dear,
Long, long ago, "
If you're curious, or can't place the tune, here's how it should sound.
#
Thanks for stopping by. For more, or to get in on the action, please see the Women of Mystery.
Posted by Leah J. Utas at 3:48 AM 8 comments:

Gratitude Monday -- Our Moment With Kirk

It was only a few seconds, but my friend Sylvia and I stood with William Shatner and had our photo taken.

I remember watching Star Trek back in first run. It was my favourite show. Still is. It at no point occurred to me back then that I would ever see in person Kirk and Spock, never mind get pictures.

I did. I have. And my best friend was with me on both occasions. In fact, it was her idea to go to The Nimoy Event in Vulcan last year and to ComicCon in Calgary this year. 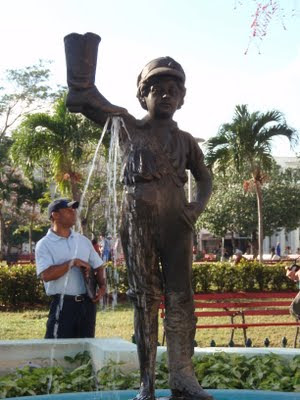 Statue in a square in (I believe) Santa Clara, Cuba.
The man behind the statue was our tour guide.
Posted by Leah J. Utas at 5:26 AM 9 comments:

The first national park in Canada, Banff, was established today in 1887 after the passing of the Rocky Mountains Park Act.
Thank you, Sir John A. Macdonald.
Let's all go hug a mountain.
*
Thanks to Messymimi for her listing of important things on this date.
Posted by Leah J. Utas at 6:22 AM 12 comments: 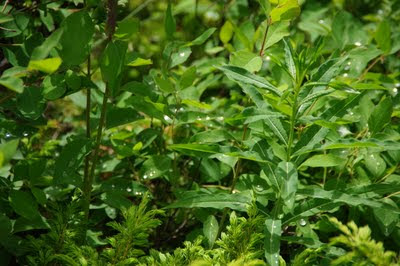 It's the first day of summer in the northern hemisphere.
Happy Summer Solstice, Litha, Midsummer, the term of your choosing, or simply June 21.
Posted by Leah J. Utas at 11:48 AM 9 comments:


I saw William Shatner in person at the Calgary Comic Book and Entertainment Expo June 18, and I am grateful.
Saturday was, as my best friend Sylvia put it, "a lineful day." Thousands of people were crowded in at ComicCon, and a great many of them wanted their photo taken with Mr. Shatner, ourselves included.
We spent five hours out of the 10-hour day in line. One stellar half-hour saw us wait in line to get in the line to get our photo taken.
This probably sounds like I am complaining. I am not. We planned our "Shat On Sat." weekend for months. I got to spend time with my best friend, and now we've seen both Spock and Kirk.
This is good.
I am happy.
#
In the pic Mr. Shatner is on stage at the Corral after having been 'white-hatted' by Calgary Mayor Naheed Nenshi. To be 'white-hatted' means he's now an honourary Calgarian.
Posted by Leah J. Utas at 2:46 AM 11 comments:

This scene could be any time in the last few thousand years.
I apologize for the reflection in the window.
Posted by Leah J. Utas at 4:22 AM 11 comments:

Two Sentence Tuesday--Sinking My Teeth In It

I've gotten some work done on BloodLovers these last few days.  I've changed a character's name and am doing my best to kick up the heat a bit.
Here's a taste:
"He wanted to bite into the tender flesh of her thigh while she sank her sharp fangs into him. He wanted to fill himself with her pulsing, salt wine while she took his, hearts pounding, teeth ripping flesh, sucking and growling until they lost themselves in taking and giving life until neither remembered where they began or ended."

#
I haven't done much reading lately. The nice Jehovah's Witness ladies came by yesterday to drop off their magazines. Included this month was a flyer for the upcoming JW conventions in Edmonton and Calgary.
Two attention -grabbing lines from it in reference to a prophetic dream in the Biblical Book of Daniel :
"Why should you be interested in that dream? Because its fulfillment will have a direct impact on the lives of everyone living on this planet, including you and your loved ones."
#
Thanks everyone. For more or to get in on the fun please see the Women of Mystery.
Posted by Leah J. Utas at 1:26 AM 10 comments:

Gratitude Monday --Another Day, Another Chance

It's another day.
The start of another work week.
Whether it is a sunny day, or rainy, or cloudy, or whatever, the point is it is another day, and anything can happen.
I am grateful for the potential, and the chance, and for another day. 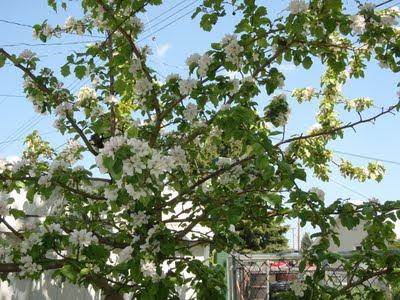 It's a riotous time of year in the back yard and everywhere else in nature.

Two Sentence Tuesday-- Back in the Fanged Saddle

It's been a few weeks since I trotted out something from a manuscript. I've had a few false starts with a new story. I want to tell it, but it does not yet want to be told. Best I leave it be.
Late last week I sent A Fly on the Wall out to a beta reader. I'm looking forward to what he has to say.
This geared me up to check over BloodLovers. It's been stewing for a few months now. I cranked open the file the other day and realized it was in dire need of my attention.
I'm doing what I can.
Dead Broke has been sent to a few agents. One has a partial. I am forcing myself to be patient.
Work on AFOTW should keep me occupied until I have my beta's insights and editing marks.
This leaves my first, The Legend of Shallal. I don't know if it can be saved, but I won't have it put down either.
Best if I set it aside and try to forget.
Two from BloodLovers:
"The corners of his thin mouth were turned down like he had a mouthful of soured milk. It kept conversation to a minimum."
#
I have many, many books waiting to be read. This is a pleasant problem.
Right now I am enjoying Sherlock Holmes: The Complete Novels and Stories Volume 1, by Sir Arthur Conan Doyle.(Bantam Classics, 2003).
I read a few stories or a  novel in it then set it aside. I want to devour them all at once, but this way they'll last longer.
Two from The Five Orange Pips:
"We sat in silence for some minutes, Holmes more depressed and shaken than I had ever seen him.
'That hurts my pride, Watson,' he said at last."
#
Thanks for your attention.
For more or to get in on the action visit the Women of Mystery.

I am grateful that this mess:

I made rhubarb juice yesterday. It's about the easiest thing to do with it.
Rip it out, wash it, chop it, cook it senseless, and drain.
Add water and sweetener to taste. I used a bit of white sugar as it was cooking to encourage the juices to run. Later I poured in cane syrup. It is best this way.
Husband likes it.
I like it.
The rhubarb may have a different opinion.
Thank you, rhubarb, for all you give.
Posted by Leah J. Utas at 2:34 AM 16 comments:

These stairs were the way down from a mogote. We scrambled almost straight up a narrow rocky path, walked through a cave complete with sleeping bats, then out and down.
It was a good trip.
#
Please note, I did look up mogote as the singular of mogotes. I can't believe everything I read on The Interchoobs, though, so if someone knows the singular for a fact, please tell me.
Posted by Leah J. Utas at 1:53 AM 13 comments:

I don't care about the current Bruins/Canucks tussle for the Cup.
I care that the NHL is returning to Winnipeg.
Finally.
I was as nearly as upset as a Jets fan 15 years ago when the team moved south and became the Coyotes. It was wrong.
Meanwhile Atlanta, a city that had already lost a team when the Calgary Flames headed north in 1980 is losing it's second NHL team. Sad as that is, that team is moving to Winnipeg.
That's good.
For as happy as I am that hockey teams and players have great success south of the border, hockey belongs in Canada.
The move still requires formal approval  later this month so I'll try to contain myself until then, but for right now, the news is good.
Yay!
Posted by Leah J. Utas at 3:26 PM 13 comments: