I’ve been a good little writer and kept myself busy with editing and reading last week.
I finished the first edit of The Legend of Shallal on Sunday and it put me at loose ends. I was still in editing mode and wasn’t quite sure what to do beyond wandering around the house bumping into the furniture and apologizing.
That wears thin after a time.
Since I still had my personal editing setting activated I decided to open up the vampire western and do something about the obvious typos. My head’s not really in it, but it keeps me from going back to Shallal.
The weather’s turned suitably nasty, though, so that’s a big help.
It’s good for reading, too. I’ve finally cracked open some Terry Pratchett and am nearly done his first Discworld novel. It’s been out since 1983. Not sure why I haven’t visited Discworld until now, but at least I’ve made it there. It takes me a while, I guess.

From The Colour of Magic by Terry Pratchett, Corgi Books ( copyright 1983)

“ ‘Yar. Well, I’m not sure about it myself, really. It’s a sort of bet, see?’ said the innkeeper nervously. ‘In-sewer-ants, it’s called. It’s like a bet that the Broken Drum won’t get burned down.’”

#
From The Legend of Shallal here are a few extra lines in the interest of context.

“In the north the Thuliacs high, cracking voices hit a midtone and kept it until their lungs strained. They raised hands and swept them over one another and took another breath of the close air in the tunnel. The tone they loosed was high enough that they had to monitor one another to ensure they were really making a sound.
Beside them at their feet their wolf guard stood at tight-jawed attention. His ears hurt. His mind screamed. His lupine sensibilities were frozen as he did all he could not to howl.”
#
For more, or to find out how to participate, please see the Women of Mystery.
And thank you for stopping by. I appreciate it.
##

Sidenote: this is my 666th post.
Yay!
Not sure what to do to observe it, but it must be celebrated.
Maybe this? 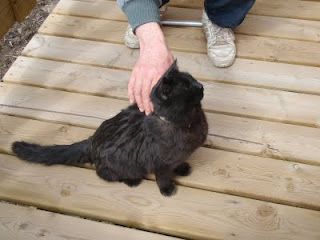 Hey, I have had some nasty weather here and also a black cat in my path. Good luck aye? Your lines "His ears hurt. His mind screamed. His lupine sensibilities were frozen as he did all he could not to howl” has that brisk, urgent style I like.

Great lines!! I can hardly wait to read the whole thing.

And the photo was completely suitable for your 666th post. Totally.

David, thanks for the kindness on the style.

Look at that, and I am writing about a black cat today.

You are?! Well now it all works out.

Nice thing about books...it doesn't matter when they were published, you can usually find a copy to read. Discworld is so much fun too ;)

Love your lines, each time I read a bit, I want more.

Reb, I picked up the first three of the series. Should be exciting.

Glad these posts are whetting your appetite for the whole book.
And yes, I am so lucky to have a friendly black kitty available.

I agree about wanting to read your whole book.

As for black cats, we have one. His name is "Badland's Blackie" after the bad guy in a Three Stooges short, and he is such a coward, we call him Baa-Baa as a nickname!

It's so important just to get away from the WIP and let it cool to the touch.

Huge Pratchett fan, here. What's neat abut his books, among the many things IMO, is that they take place in different parts of Discworld with very different environnments and themes. There's usually some crossover appearances of some favorite characters, but they can hop all over the place. The witchy and Unseen University ones are indeed some of my faves though, and any with DEATH as a major character.

Messymimi, thanks for the compliment. There's something ironic about a cowardly black cat.

So right about the WIP, Clare2e.
Love the Death character and am looking forward to more.
Panther is exactly the cat we'd have if we could.

Your lines are always so intriguing. Congrats on the 666.. black kitty does indeed seem appropriate. Now flip than number over and work on the next 333. ;)

and dont love your title :)

I completed NaNoWriMo and now I know there is a lot of editing waiting for me.
I dont love the editing process as do you...

Miz, good on you for finishing NaNoWriMo. It's good to have a project on the go to play with.

Meanwhile, let me clarify. I do not love editing, I am merely stuck in the editing loop.

Glad you like my 666 celebration. Such an important marker must be observed.

Hello !.
You re, I guess , probably curious to know how one can make real money .
There is no initial capital needed You may commense to get income with as small sum of money as 20-100 dollars.

AimTrust is what you haven`t ever dreamt of such a chance to become rich
AimTrust incorporates an offshore structure with advanced asset management technologies in production and delivery of pipes for oil and gas.

Its head office is in Panama with offices everywhere: In USA, Canada, Cyprus.
Do you want to become really rich in short time?
That`s your choice That`s what you really need!

I feel good, I started to take up real money with the help of this company,
and I invite you to do the same. If it gets down to select a correct partner who uses your funds in a right way - that`s AimTrust!.
I make 2G daily, and my first investment was 500 dollars only!
It`s easy to get involved , just click this link http://ivisuliry.100megsfree5.com/hihyky.html
and go! Let`s take our chance together to get rid of nastiness of the life

And I still haven't read any Terry Pratchett though everyone seems to love him. I must give him a try!

Crabby, thanks so much.