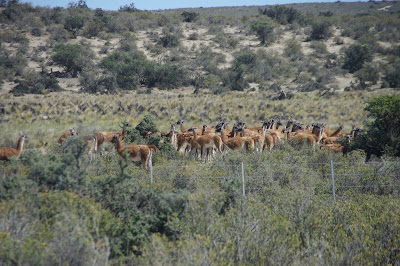 We passed by several guanacos on our way to see penguins. Some were alone, a few in small groups, and then this lot.

Guanacos are one of the four camelids and are native to the arid regions of South America. I'd already seen llamas, alpacas, and vicuñas in the wild in Peru so getting to see them meant I've now seem them all in their natural habitat. That is quite a treat.

It was hot day, near +30C, dry and dusty and that lends itself to relaxation and letting one's mind wander about until you need it for something. I noticed something interesting. If I hadn't been paying attention, or say, if I'd been sleeping and then woke up to see the landscape and these critters I would have spent several confusing minutes convinced I was in the southern Alberta looking at antelope. Color and size are similar enough to fool me for a few minutes.

ETA: Several paragraphs are missing from this post. I have no idea where they went and I can't remember them well enough right now to re-create them.
Posted by Leah J. Utas at 3:00 AM

Another interesting picture, dfLeah. They look like a cross between antelope and llamas! Very cool.

Guanacos! I have never heard of such a thing. Are you sure you didn't make them up? :)

Very cool. My goodness what an adventure you had!

Crabby, oh to have such an imagination to have invented such an animal.

Very interesting Leah. I can see that you would think of southern AB and antelope.

Fabulous photo...it is great without the added paragraphs! :)

I have never heard of them - thanks for the pic and the lesson! I love that phrase, "on my way to see penguins". How often does one get to say that??

You're quite welcome, Missicat. You're right, there won't be many more opportunities to use that phrase. Glad you enjoyed it.

A wonderful phrase "on my way to see penguins".