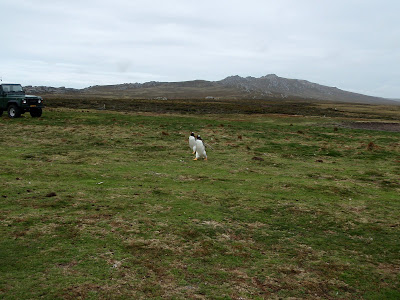 Two Gentoo penguins make their way to a second colony a few hundred metres away. Penguins have the right of way. If they want to cross your path, you stop and wait.


We saw two colonies of Gentoo penguins in the Falklands.There seems to be a lot of visiting going on. The colonies were only a few hundred metres apart and it made for a lovely waddle for human and penguin alike.

The Falkland Islands are windswept and haunting. Trees cannot grow there, though there is a fair bit of scrub brush. There are no native mammals so the imported sheep have the run of the place.
Getting to the penguins meant bone-jarring 4 x4 rides over private land long since chopped up by said 4 x 4s. The rule was get in, brace yourself, and hang on.

Some 3,000 people live on the Falklands with 2,500 or so of them in the capital, Port Stanley. The rest are scattered about the islands. I wanted to get a photo of a typical farm, but the road a narrow, two-lane gravel affair, was much too rough.
Here's a view along the harbor. Note the walkway along the waterfront. 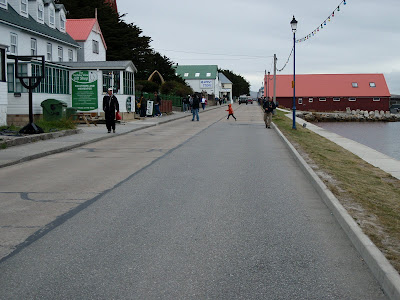 Just lovely, I can well imagine the 4x4's have done a lot of damage there and they are not known for comfort. I think it is wonderful the penguins have the right of way.

Love the penguins! Of course they should have the right of way!

Great post! And I'm not at all surprised that the penguins have the right of way - they were there first!

Reb thanks. They've sure turned up the soil, and not in the good way.

dfBag Lady,thanks. It's good the penguins get the respect they deserve.

Love the penguin pic--when you click on it in close up, they seem to be striding along so purposefully, like executives on the way to a big corporate meeting. But way cuter!

That's right, Crabby. They were purposeful and determined.

Those pics remind me of Iceland and Scotland - barren, moody and mysterious - good fodder for the artistic soul.

Glad you had a good time and got back safely. :)

Thanks, Frank. I agree about the fodder. Open spaces lets one think and create.

I am catching up on a bunch of your world's bottom posts at once. Thanks for the great pictures and anecdotes. The cow surfing is a new one on me, for sure, and I love all the penguin pix and info. What a terrific time you're having! Yes, my eyes have gone over all greenish-like.

Clare, good to know you are enjoying the virtual cruise.
If you ever get a chance to go cow surfing, do it. You'll have a tale to tell.

Love those penguins. That one in front looks like he's about to direct traffic.

My God, but it is beautiful there, that must have been some trip.

Hello Saint Patrick, and thanks for
commenting. It was gorgeous there.
I hope you'll be by again and again.

Those open spaces appeal to me where the penguins are. Great photos and narrative.

Thanks, Barabara. I'm attracted to the empty quarters of the world.