I had an idea that the gluten free biscuits I'd made last week would make a toothsome pizza crust.
I was right.
The recipe I consulted called for two cups of flour and used a half-cup each of sorghum and sweet rice flours with a half-cup of tapioca and potato starches.
Instead for the biscuits I used a half-cup of brown rice flour, a half-cup of sorghum flour and one-quarter cup of coconut flour.
It's important to note here that coconut flour drinks a lot and expands. A quarter-cup of it is equivalent to a full cup of most other gluten free flours such as the above-noted rice and sorghum.
I used a whole egg instead of only egg white as the recipe called for, and added an extra tablespoon of liquid as well. It worked out fine.
For the crust below I used soya flour in place of the sorghum, but that was the only change from my version of the two recipes. 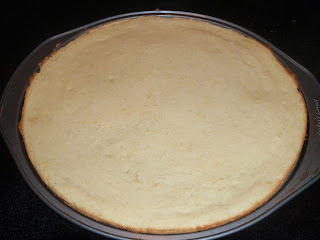 I added two teaspoons of guar gum even as the recipe called for a half-teaspoon of xanthan gum. ( They are interchangeable. Guar is one-third the price, but use xanthan if guar upsets your stomach.)
I also added a tablespoon of psyllium fibre. It helps with stretchiness and it soaks up liquid.
When using coconut flour and/or psyllium it's important to let the dough rest a few minutes. It will set. Liquid will soak up.
It rested about three minutes and then I spread it out on the pan using the back of a spoon. I had to wet the spoon a few times to help things along.
That sort of thing is normal.
I did the crust at 425F for 13 minutes. I'd set the stove timer for 17 minutes, but decided --correctly-- the crust was done.
I made it early in case something went terribly wrong.
It was fine.

That looks delicious, Leah! Now that we have a place to buy more gluten free ingredients, I may have to start experimenting!

Bag Lady, thanks. It was. Experiment away. I think you'll be pleased with the results.

You've made me hungry again!

Thanks, Messymimi. I use toothsome every chance I get.

That looks like an experiment worth doing. I had to read closely at the sorghum flour, because I have four quarts and a few open pints of sorghum (syrup) in my cupboard. Dessert pizza?

It has been passed on to the cook in the family. Thanks.