During our last few days in the Greek Islands I ate spanakopita. I never used to care for it, but had it for lunch one day on Naxos and knew I had to have it again.
This morning I woke up craving it so I threw together a makeshift gluten-free version with leftover kale. 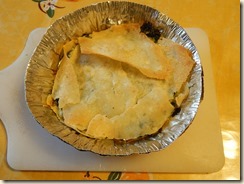 A rice tortilla served as the pastry, the leftover kale already had some onion green in it, but I added more onion anyway, used feta cheese and a goat cheese with bruschetta flavouring, and plenty of dill and parsley.
I reheated the kale in a frying pan using MCT oil and olive oil just for the sheer hell of it, folded in a beaten egg and the cheeses, and baked it for about 30 minutes. About 28 of those minutes were at 350 degrees with the remaining two at 375 to get a bit of browning on top. 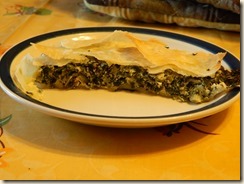 It was tasty enough and took care of the craving, at least for now.
Because I had it for breakfast, I served it with bacon. The tastes are good together.
Posted by Leah J. Utas at 10:17 AM

Sounds and looks yummy. I'm looking forward to hearing about your Greek adventure. You two vacation in the most wonderful places.

That does sound like it would quell a craving, quite delicious.

Thanks, Hilary and Messymimi. It was pretty good, but needs work.

Cheese always gets my vote.

A great way to use and get more kale in your diet!

Cheese makes everything better, Mary Anne.
BB, so true, and so sneaky.