“If you weren’t sitting up and talking, I’d be worried.”
Although he was smiling as he said it the doctor was unmistakably worried: he’d been unable to find my pulse.
He frowned a bit over my blood pressure and gave me the stethoscope so I could listen to my heart. I believe he wanted to reinforce the fact that something was very wrong. My heartbeat was weak and rapid, up to 200 beats a minute.

Lack of breath and a ribcage that felt two sizes too small made me go to the clinic. I’d had this for a while but it when from annoying to painful overnight. I shoveled snow one day with no problem. I shoveled about the same amount of snow the next day in nearly identical weather conditions and my chest ached and my lungs felt as though they were been squeezed. I thought it was asthma.

Then one night I could not exhale properly. The following nights found me unable to find a position that let me breathe right. On a Thursday in mid-December I walked a half-block to collect the mail and had to rest four times. I hike in Canadian Rockies. Summers find me routinely taking 10 mile bike rides. Something was terribly wrong.

“Well, it’s not asthma,” said the doctor.
“That’s good.”
“It‘s something worse.” He went on to tell me all he could hear in my lungs was fluid. I was to get to ER now. He called over and told them I was coming and that I had atrial fibrillation.

The top two chambers of my heart had stopped. The bottom two were trying vainly to make up for it and this led to congestive heart failure.

At ER I was given oxygen first, asked several questions, and had a few IV leads installed. My blood pressure was taken as well as a few others vitals, I had an ECG and a chest X-ray and I was hooked to a cardio monitor that became my boon companion for the next several days.

Then it was time to get the fluid out of my lungs. A highly effective and very fast-acting diuretic was injected through the IV. I had to have a catheter for this and at first I didn’t want it. My mind changed quickly.
The diuretic took effect in less than 10 minutes. I recall saying that before they did anything else they really needed to put in the catheter.
A small balloon is inserted inside the bladder to keep it inflated so it can drain. Putting in the balloon and the tube is uncomfortable though blessedly quick.
Once we got a good drain going and it was obvious that my kidneys were fine it was time to straighten out the heartbeat.

I had an IV cardio conversion, a heart rebooting. A drug was sent in through the IV to stop my heart. Its own electrical energy restarts it, theoretically in proper rhythm. The drug sent jagged edged lightning speeding up my left arm.

When I was 11 years old I accidentally touched a live spark plug. I felt an explosion in my elbows and shoulders and the next thing I knew I was three feet away facing the opposite direction. I’m glad it happened because it put the cardio conversion in perspective. For as painful as it was, touching a live spark plug is worse.

The doctor had mumbled something about how the procedure might not work. It didn’t work. He also mumbled at one point, “We don’t have much time.”

I went in to Emergency round 9:30 a.m. and I was there until nearly 3 p.m. before being transferred to the hospital’s Special Care Unit.
I had up to six medical professionals working on me for about two hours. Long about 11:30 a.m. this dropped down to one person checking in sometimes.
This was a very good sign. 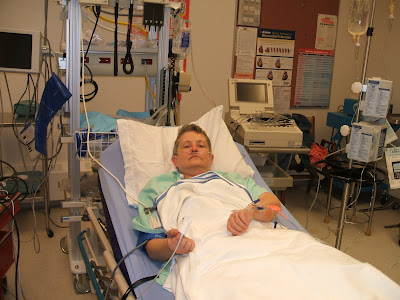 Showing off the assorted IVs as well as cardio monitor, oxygen, blood oxygen level monitor, blood pressure cuff, and there's a catheter, too, though the tube doesn't show.
Posted by Leah J. Utas at 7:19 AM

OMG, reading this made the Bag Lady short of breath...(she always has that reaction whenever Reb has an asthma attack around the Bag Lady)
Thanks for sharing your journey, dfLeah.

dfBag Lady - It's a pleasure, if you'll let me put it that way, to share my experiences.
I totally get what you mean about reacting to someone else's asthma attack. When I watched "The Motorcycle Diaries" (Not sure if that's right. It's the movie about the young Che Guevara) and Che had an asthma attack I almost had one with him

Well thank goodness you're all right! Sounds like you managed to remain pretty calm throughout this--I would have been flipping out.

Glad to see you're back blogging, and Happy New Year!

Thanks. I was calm most of the time, Crabby. I chose to see it as a new--and unique--experience.

I am soooo happy that you are back and sooooo sorry that you had to go through this.

Leah, don't ever do this again (finger wag)!

So glad you got through it all.

I won't dare cross you, Hilary.
Thanks.