I was monitored virtually constantly. The nurses’ station was right outside my door in the Special Care Unit. This enabled them to keep a close eye on both me and the fellow in the next bed, 60ish lifelong diabetic who’d had a very high blood sugar spike, in the 20s or even 30s. For a while a nurse sat in a chair between us watching.

My vitals signs gave the assorted nurses and my doctor quite a time. They made several tries until they got a pulse and blood pressure readings they were willing to believe. They came to not trust their machines and usually did it the old-fashioned way, but not after up to three tries with the automated cuff. It seemed to be done every 15 minutes or so at first, then calmed down to every hour.

Irregular heartbeat can lead to blood clots so I was put on an IV drip of Heparin, an anticoagulant. Blood was drawn every four hours and I was on absolute bed rest.
Next I was given a nitro patch for overnight. It’s a vasodilator and it works. My feet got warm for the first time in days. I also enjoyed the common side-effect of a nitro headache. It wasn’t that bad, and my warm feet were a reasonable trade-off.
I was awakened in the night frequently for the vitals and bloodletting. This was good. The only problem was at one point in the night the catheter got a vapor lock or some such and didn’t work. It was unpleasant, but a nurse was in checking my vital signs at the time so it was corrected immediately.

My doctor likes to understand why things happen. He was flummoxed why someone my age, 49, my weight, about 145 lb., and in good health got hit with congestive heart failure. An ECG had suggested damage, possibly from a heart attack. I couldn’t think of anything in the past 3-6 months that would fit.

Meanwhile, I’d had Mike email my cousin The Bag Lady the first night as the next day was her birthday and she would wonder if she didn’t hear from me. This led to her doing a bit of sleuthing, as is her way, and found a cousin who said his family members had heart problems at around my age and he further suggested the doctor check for amyloidosis. That’s a disease where rogue proteins break off and attack organs.
My doctor is an animated fellow to begin with. When he heard this his eyebrows shot up to his hairline, his eyes bugged out, his mouth flew open, and he madly drummed his pen against my chart. “Yes! Yes! We’ll look for this. It would cause the kind of damage suggested in the ECG! Yes!”

Meanwhile I had more important things on my mind. Could I have chocolate?
I could, but my doctor said it had to be dark and “only two blocks.”
Now to me that’s a 4” x 6” x 1” slab. My husband said it meant two square sections of a chocolate bar. He won. Mike, who was at my side every day all day through this, got me chocolate and made sure I stuck to the daily allotment.

My doctor wanted more tests done so after two days here I was transferred to Red Deer Regional Hospital 55 miles away. It was the only time I was scared. Being transferred to a larger, city hospital meant unequivocally there was something seriously wrong. 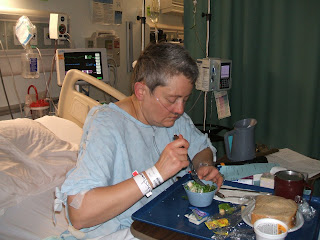 I got my appetite back within about an hour of getting the diuretic that morning. I never knew how much I liked salt until I couldn’t have it.
Posted by Leah J. Utas at 7:03 AM

Well, at least the Bag Lady provided your doctor with a little excitement! It was the least she could do...

Wow - glad you are OK! Sounds like you had a great medical staff there. I think chocolate is an excellent medicine!

Missicat, good to read you again.
I was looked after by a great staff.

I like the idea of your size of chocolate blocks! Must be milk chocolate for me though please! Warm feet are the best thing aren't they?

Your doc is a man after my own heart! I love to get to the bottom of medical things too, much to the annoyance of spouse and family, whose eyes tend to glaze over as I go into rhapsodies over some new insight about someone's Krebbs cycle.

I wish I were kidding, but I'm not.

dfBagLady-I think you made his day.

Bunnygirl- It's good to be interested in a wide variety of things.