Gratitude Monday - Brought To You By Bacon

The bacon I cooked for the batch of beans. 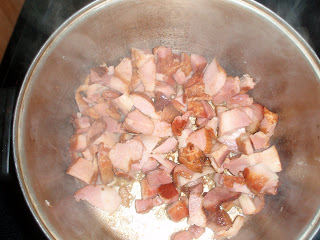 I love bacon. I am grateful for bacon. Bacon makes my day. I don’t eat swine-based bacon so much any more simply because after a few meals of it I feel too greasy. I still love the real stuff, but I’m more likely to eat beef, bison, or turkey bacon. Similar taste, especially the turkey variety, and not as much fat. In a way that’s too bad because fat bacon is so very tasty.
Since the Swine Flu snorted its way through the population we who think have had to put up with a great deal of nonsense, especially the head-shaking announcement from the WHO the other day.
Some gentlefellow suggested that even cooked pork might transmit the disease. Thanks buddy.
That said, improperly cooked meat can make a person sick, and if you’re eating improperly cooked pork, then H1N1 will be a freaking day at the beach compared with what else it will give you.
Sorry. Got carried away. Stupidity does that to me. It was retracted the next day, but the damage was done.
I got so irked that as a gesture of protest I made a batch of beans from scratch the other day. I used a recipe from The Bag Lady that’s so good it will move you to tears, and I doubled the amount of bacon called for in it.
The hog industry had taken a beating for various reasons over the years and this is one more blow.
We raised hogs for a few years when I was young and I rather enjoyed their company. Hogs are fine creatures, smart, personable, tasty.
Hog famers are decent folk who work hard and provide food for our tables. They have enough to put up with; they don’t need fear-mongering and nonsense.
Thank you farmers and thank you hogs.
Posted by Leah J. Utas at 1:28 AM

how much do I love just the TITLE of this post :)
I love me some bacon.
I love that I was raised by a liberal lefty jewish mama who really did follow MANYMANY of the tenets of Judaism----except the no bacon :)

Thanks, MizFit. I love that you were raised with bacon.

And I totally agree with you about the stupidity and fear-mongering that's been going on over the H1N1 flu virus. It's freakin' ridiculous... almost leaves me speechless with rage.

Thanks for the shout-out, cousin!

My pleasure df Bag Lady. And I like to let loose with a good rant now and again. Purges the built-up toxic waste left by raging assininity in the world and cleanses the soul.

It does my heart good to read your stuff. Here's to bacon and ranting against foolish news.

I love your rant against all that... HOGwash. ;)

Thank you so much, Tom.

Hilary, doublesnort to you for that one.

Love the rant! Love bacon! Hate stupidity in all it's forms, but especially when it comes from people that should know better.

Thanks, Reb. Glad you enjoyed it. Go Bacon!

Good one Leah. I love bacon too and eat more of it than is likely good for me. I'm also appalled (though unsurprised) at the blatant fear-mongering by the media over this latest strain of flu.

Thanks, Frank. I agree. I could fill many a blog post with my feelings on the state of the media today.

I love bacon. But now I try not to eat it very often. Pigs are very smart animals and now I feel guilty for eating them. :-(

Lover of Life, everything has an intelligence and sentience, plants included. If we stopped to think about it, then we'd never eat anything.
That said, it's hard to turn down bacon.

Rants are good for you, makes you feel better for it.

Hogs are certainly tasty. My grandfather raised blue ribbon hogs that won prizes at the stock show in Toronto in the 1940s after shipping them from a small ranch east of Camrose. He would let them run loose in a large field before rounding them up to be shipped east. He heard many naysayers complain that practice would take the meat off them. Actually it firmed the hogs up and gave them a brief moment of freedom before the end result.