Gratitude Monday - A Room and a View 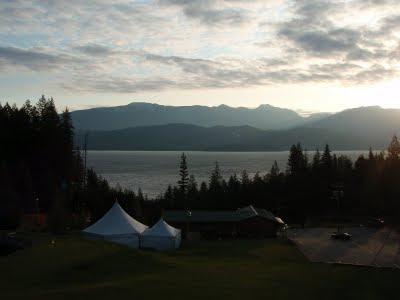 Morning from the Kootenay Lakeview Lodge, Balfour, BC.

We took off to the neighbouring province, British Columbia, for the Thanksgiving weekend. We explored along Kootenay Lake and spent a wonderful hour in the hotsprings at Ainsworth. It's a small place and every room was booked for a fishing derby on the lake so we buzzed down the road about 20 minutes to Balfour. I'm so glad we did because the Lodge we stayed at was spotless, every room had a view of the lake, and there was a restaurant just down the hill.
We'd spent the first night of the trip in Kaslo in a sad motel/cabin affair. It was supposedly clean, and while it was no America's Best Shithole it had it's moment in the sun.
I had to complain to about the condition of it and was initially not believed. I dragged the poor woman into our bathroom and showed her the evidence. I give her this, she hardly shuddered at all. She promptly cleaned the offending areas. I'm grateful for that although the condition of the toilet was inexcusable.
Mike later opened a cabinet under the sink in the kitchenette and, as he put it, "disturbed some filth."
At the Kootenay Lakeview Lodge we were given the keys to two rooms to look at and then had to give them right back as the rooms weren't cleaned. The room we checked out hadn't been done either, but it was still leaps and bounds better than the abomination we'd slept in the night before.
We were given a clean room for the night with, as Mike put it, "A toilet you could drink out of." I'm grateful no one did that.
I'm glad for the chance to get away and see something different and to have so much to see so close to home.
Posted by Leah J. Utas at 3:00 AM

I'm glad the views turned out to be worth the trip.

When I was growing up, with a mother who considered "roughing it" to be a hotel without room service, I would never have believed some of the places I have stayed, and descriptions I have read of places others have stayed.

That's a shame about the room but I'm glad you sorted your lodging out. That photo is just gorgeous!

Oh no! Somehow I assumed that Canadian accommodations would all be clean and tidy and that only sloppy lazy Americans would offer or put up with filthy rooms.

And I feel very grateful that we are just heading off on our roadtrip, as I share your appreciation of travel and new sights.

Messymimi- what an interesting definition of roughing it. Yes, some definitions of habitable leave a lot to be desired.

Hilary - the first room was shameful.
Thanks about the pic. It was a wonderful sight to wake up to.

Crabby - Be assured, we Canadians can match almost anyone filth for filth.

It really was a great adventure. Open minds are important for this sort of thing.
So you're off, are you? Good luck, have fun, and see you at the other end.

Lovely view, well worth one night in a crappy room. Sadly, I've seen one or two of those myself.

I have the beginnings of motel/hotel phobia. We always bring our own pillows, but you just never know how clean rooms really are. A dirty toilet would send me over the edge, I'm afraid. Glad the next night was better.

That's my approach too, Reb. The view made up for a lot.

Nancy, I can certainly understand. I try not to think too much when I'm in one. I always launder whatever sleepgear I wore once we get home and use something different for my own bed.

I have stayed in some 'quaint' motels years ago with the majority of them clean. Standards seem to have changed. But despite your experiences with the sanitary condition of the washrooms, it looks like you managed to have a good time anyway. Hotsprings are great for tired muscles.

Glad you enjoyed your weekend, and that view was fabulous! But I'm with you on the filthy accommodations - I would have been the same way!

Barbara, the room gave me a story to tell so it is not a complete failure.
We certainly enjoyed ourselves. It was time well spent.

dfBag Lady, it sure was. I'm glad I know how to complain effectively.