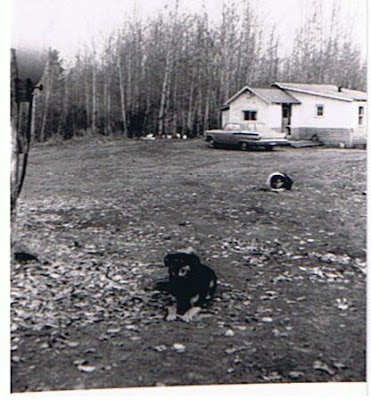 This has always been one of my favourite pictures. The dogs, Scamp (foreground) and Pal (background) posed for it. They'd been that way for a while when mom saw them and thought it would make a nice picture. She was right.
It's October, probably 1966. The air was crisp, the day was overcast, the Ford Fairlane 500 was parked neatly in front of the house, and the dogs were still full of energy.
They were friends. They ran circles together around the school bus and any other vehicle that moved, swam in the creek, sang with the coyotes, and occasionally play fought until they were tired. When that time came one would lie back and expose his throat while the other pretended to rip it out.
While Pal was long-suffering and consented to be mauled by children, ridden, used as a pillow, and even hitched to a sled once, Scamp was the watcher. He was given more to chasing and we even saw him point at the cluster of rose bushes near the old house once.
I don't think Scamp ever got his due. He was a good dog, and a good friend.
They've been gone a long time. It'll be 40 years in the fall right about the same time of year as that photo was taken. Scamp first, then Pal moped around for three weeks before joining him.
No matter how many pets have come after them, they were the first and they'll always be the best.
Posted by Leah J. Utas at 2:31 AM

which all led me back to singing the song about a picture painting a thousand words.

I ADORE that they were named SCAMP and PAL as well.

Im a curmudgeon I guess and laugh at the newfangled fancypants names of dogs these days.

Thank you so much, Carla.
I have no idea how we got Scamp or who named him.

What a sweet story. Funny how our furry little friends are never forgotten.

Pal was there for quite awhile before Scamp, wasn't he? I remember him the best.

Mother had a story about Pal and how I used to "ride" him when he was lying in the yard like that (I was around 1 1/2 yrs old). The older kids came running across the yard, Pal leaped to his feet to run with them and I sailed across the yard, landing on my head! Poor Mom watched the whole episode from the kitchen window, too far away to do anything! No harm done, though.Didn't even make me cry.

Thanks, Nancy. I think of them often.

dfBag Lady, OMG that's funny. Glad you weren't hurt.
I don't know about Scamp, where he was from, how we got him. Maybe one of your brothers knows his story? If you ever find out, please let me know. It only occurred to me lately that I don't know his origins. Like Pal, he was always there.

Yup, I'm the only person I know who was bucked off a dog.
Sigh.

What a great photo and fun memories! We don't forget our furry friends, but what a shame they don't stay with us longer.

I agree that the first pets are the best.

My dad had a dog that he loved like no other my parents have had since. He married my mom because she was the only girlfriend his dog liked.

They have been together 48 years this June. The dog knew.

Pets will always have a special place in my heart. I also had a Scamp. He was full of energy as well, and did the snooping-digging routine daily. He once snooped down the wrong hole and almost had his nose snapped of by a muskrat. In the next instance he dove in and that was the end of the muskrat, so, he proudly brought him back to the campsite to show everyone and to allow no other living thing close to his prize for fear they may take it!

Your Scamp sounds like he was quite a dog, Redbush. I can understand why he would protect his prize. I'd be the same way.

They sound like a wonderful canine pair. Too bad their time with us is so short. Thanks for the photo and story about Scamp and Pal

Gee, the blog thing that supposed to tell me you have a new post isn't working - so here I am late again. I remember both of them, but like Sis, I remember Pal much more.

I love the picture. Did those good boys ever get to ride in the Fairlane, tongues out, racing the wind?

Aw, they sound like wonderful dogs. I still remember our first dog; she was the sweetest thing.

Thanks for reminding me of how lucky we are to have animals in our lives!

Awww. What a sweet and poignant post. Scamp and Pal sound wonderful, and Scamp looks so happy with his big doggy grin on his face.

Yes, I love to think about the four-footed friends I've had in my life, too. They will always have a cherished place in my heart.

Nice, nostalgiac tale, Leah. Critters can sure play important roles in our lives. (I can't even think of the Rainbow Bridge without misting up.)

Sweet. The dogs look like they were waiting for a ferry to show up. Everytime I visit my folks, I am reminded of our Shetland Sheepdog who kept us on our toes. My Mom never got another pet after Tesse.

You damn near brought tears to my eyes. Beautiful post. Stark, beautiful picture.

Awww...they sound like they were great pets. I miss the kitties of my childhood too.

It is more widespread than you think for some people to experience frustration with [url=http://cungmuagiatot.com/thoi-trang.html]Thoi trang nam[/url] and locating excellent information. There have been plenty of times when I have needed to find out more, but I was not all that sure where to check. The funny part, maybe, is there is ample content on the net, but you are still not sure if the resources are trustworthy. That is one thing every person who has looked for information has encountered. The balance of this report will take a look at this important topic in a lot more detail.

The general complexities of men's and women's fashion

Both women and men could have the difficulties of maintaining their clothing up-to-date and in season, yet men's style usually feels a lot less complicated. Of program, for both sexes, garments and style options can be just as intricate, and there are several'trendy'things that could rapidly become fashion faux pas - who can say they frequently see people walking on in 70s flares? On the other hand, men's style includes a few choice things that can exist eternally - which man is going to keep an eye out of position with a good-quality, tailored suit, for example? Pick basic pieces, colours and fabrics and you'll never look out-of-place.

Why traditional men's fashion is amazing

The common man's suit has hardly changed for over a hundred years. True, there are several versions for different situations, nevertheless they are all popular in their quest for a clever, sharp try to find the person. The best part about basic style for men is that it is simply fashionable effectively neat. A well-groomed man can more often than not look his sharpest in a well-tailored suit, and this can be a testament to the style of such apparel. A match will undoubtedly be worn to work in many occupations because of the professional search it provides to the person, instilling a feeling of respect and trust. Equally a match will undoubtedly be worn to several social functions, like a tuxedo to a black-tie event. This extraordinary versatility which allows suits to be worn in just about all functions is what gives it its amazing side and a permanent place in men's fashion.

Whilst classic men's styles can never be replaced, it's interesting to note that changes in men's fashion trends have produced particular traditional garments back into fashion. The recognition of vintage clothing, specifically, has brought back a wide-variety of basic styles into men's closets, such as that of the dandy gentleman. 'Dandy'is a term used to reference men who clothe themselves in a classic yet luxurious way, placing value on appearance and operating in a sophisticated manner. This pattern for nearly'over-the-top'traditional fashion for men is apparent from events including the'Tweed Run', wherever men and girls of all ages dress in significantly Victorian-style clothing and decide to try the streets on vintage bicycles - with most of the men wearing impressive mustaches! This is only one of many examples of evidence showing the revival of such designs. Additionally, there are numerous sites on line which concentrate on gentlemanly style - such as'The Dandy Project'and'Dandyism'- as well as whole websites such as'The Art of Manliness'specialized in providing articles on basic men's fashion and grooming.

In summary, although certain areas of traditional men's fashion could be cut back as new developments, the fundamental clothes which they are based on will never slip out of fashion.

"All it requires really are a few basic garments. And there is one key - the easier the better." - Cary Grant