Gratitude Monday - A Prayer for Stupidity 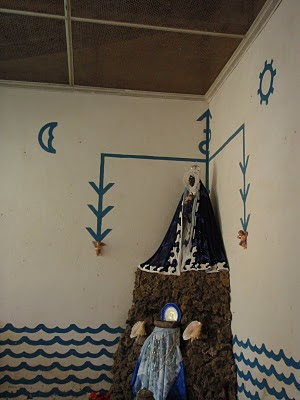 A prayer corner to the Sea Goddess in the Santeria religion in Cuba.
I did something monumentally stupid when I went to Cuba.
Sure, I've pulled some stunts that I thought were award-winningly dumb, but this one, well, if there was a Nobel Prize for whoopsies, I'd win and they'd name a category after me.
Now that I've finished bragging--and call it what it is I am bragging--here's what happened.
I counted out all the beta blockers I'd need for the two weeks and threw in a few extras just in case. As I popped one in my mouth that first morning in Havana the horrid realization came over me with a cold, glaring clarity. I only counted on one beta blocker a day.
I take two.
I let myself panic for about 30 seconds. I figure after that time panic would take over and I needed to think.
Fortunately, I can muster up reason and logic when I have to, and I was pretty sure I had to. I went on half-doses. I snapped the pills in two and had half in the morning and half in the evening.
It worked. I'm here writing this.
As to the prayer part, well, it's good to cover the bases.
We had a visit with a Santeria priest one morning. He was a friend of our guide and was happy to answer our questions.
The religion has taken over from Catholicism in Cuba in the past few years. As near as I could tell it's a hybrid of some African religions and Christianity with the highest deity in it being the Virgin Mary. In Santeria she is a Sea Goddess. Please follow the link if you want to find out more.
After the talk we had the opportunity to ask the Goddess for something.
I put a coin in the plate before Her, shook a rattle a few times, and asked to please get away with being on half the dose of beta blockers until I got home.
I am grateful to say my logical approach to the matter worked and I'm sure the prayer helped. 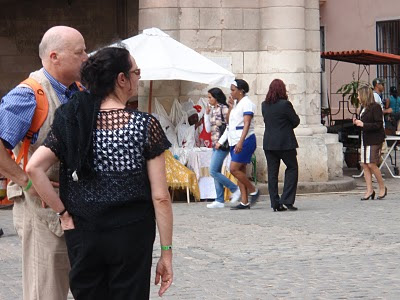 Santeria practitioners (seated, center of photo) wear all white and plenty of jewelry.
Posted by Leah J. Utas at 3:37 AM

wow.
my heart skipped a beat when I read that you made the error.

Thankful grateful all worked out ok.

I've done the splitting pills routine and it does make you sweat. And I'm glad the gods came through!

That sound so much like something I would do. Glad the half-dosing did the trick!

Prayer never hurts, and, as they say in Texas, "If you done it, it ain't bragging!"

Carla, I think my heart added a few extra beats when I saw what I'd done.
Thanks.

Thanks, David. Good to know I am not alone.

Thanks, Crabby. I hope you never have to do what I did.

Messymimi, that was my thought. Hmm, I like that saying. I may adopt it.

Cousin - I'm so glad you didn't panic and that things worked out well!
And I am thoroughly enjoying your snippets of Cuba!

Thanks so much, df Bag Lady. Calm and rational is good.

Ah, medicine. I've lost it, found it, ordered it, forgot it,and been really scared on trips. I'm glad it worked out for you.
Mary

Mary, I had a moment of terror on this trip about it, but I knew it wouldn't get me anywhere.
Thanks for sharing your medicinal missteps. I feel better knowing I am not alone.

I am glad everything worked out for you. Maybe it's time to talk to the Dr about the dosage you are on?

Reb, thanks. When I spoke to my cardiologist in December he said he wouldn't change anything. Then I ask about the rat poison and he said I could go off that.
I'd been wondering about the beta blocker, but this adventure showed me that for right now the dosage is correct. In a few more months, if I keep at the Tibetan Rites, who knows?

I'm glad it all worked out for you. They say Cuba has good, free health care, but like any health care, it's better to not have to find out for one's self.

Thanks, Bunnygirl. I'm happy to take their word for it.

Oh goodness, Leah! I'm so glad everything worked out okay. And thanks for sharing your pictures and thoughts on your trip to Cuba -- absolutely fascinating!