Scenes From A Market 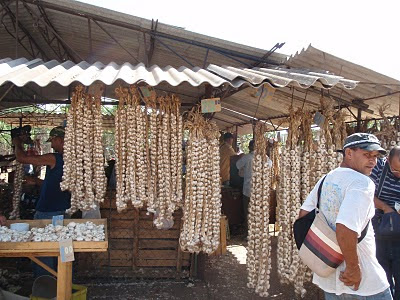 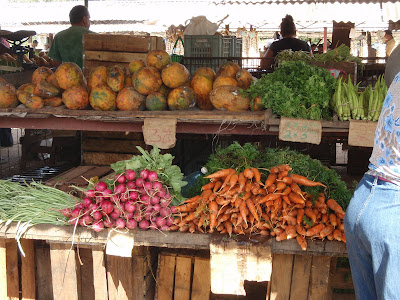 Assorted vegetables and fruits were on offer. 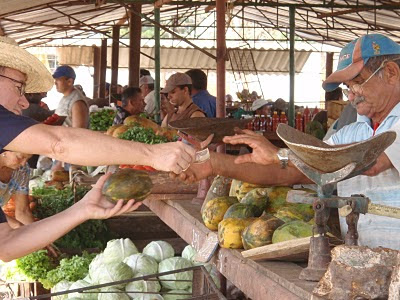 Tour member Anders Evertsson gets some fruit for lunch.


Our tour guide, Ernesto, gave us each a crisp 20 peso bill in the local currency to spend at this market. It was chiefly for the experience of it, and it was fun. Tourist are required by law to us Cuban Convertible Pesos (CUC) but our guide knew that this one of the few places we could use the local money without raising any uncomfortable questions.
CUCs traded near the Loonie. I got 420P and some change for $500 CDN. Based on that, for those better at math than me, you can sort out what a 20 local peso note was worth.
I bought three small sweet bananas for one peso. A papaya was 3P, and a pineapple was 8P.

This was also the most veggies we saw during the whole two weeks. Starches are big there, but vegetables of the non-starch variety are a rare find. We had them twice on our plates, I believe.
I often ordered a salad. A tomato salad is a thinly sliced tomato. One on occasion it was green. Of course I ate it anyway. Oil and vinegar or lemon was often the accompaniment although in the case of tomato I am happy with salt. That's good as it was often only salt.
A cucumber salad was sometimes available and one occasion all the restaurant had was lettuce. I ate a plate of lettuce and was happy about it as it calmed down my disturbing mental images of a crisp assorted green salad with 1000 Island dressing. I crave than dressing once a year, about this time of year, and I make my own. It's in the fridge now and the craving is nearly subdued, but I had a few difficult moments on the trip.

Most meals had a rice and beans accompaniment and a reasonable slab of meat or fish. Pork was common, as was chicken, and while beef was available I didn't try it as when the oxen are too old to work they are sold to the government (this is mandatory, a farmer cannot kill his own bovine) and become meat.

One of the local starchy veggies is a malanga. It's tasty enough and very potato like. One evening the restaurant served it as the side dish. It was thinly sliced and became the equivalent of potato chips. They were tasty and as I'd been craving potato chips they were welcome.
I saw potato chips twice the whole trip. They were "Mr. Potato" brand which looks eerily like Pringles chips in the tube container. These were made from potato starch, potato flakes, potato something else that I have blissfully forgotten, and bleached, refined coconut oil. I was going to get them anyway, but they were 3.95 P for a container and my craving was not that strong.

To wind this up on positive note the country doesn't have much for junk food and there's hardly any litter. Related? You tell me.
Posted by Leah J. Utas at 1:32 AM

It's a shame that veggies are not readily available in meals there. Hopefully other aspects of the meal were interesting enough - and it sure makes you appreciate accessing the foods you want back home. Great photos.

Oh, Hilary, they really weren't. The food is quite dull and starchy. It's rationed there so we knew to be happy with what we had.

It sounds very much like a "beans and rice, rice and beans" diet.

That's exactly it, Messymimi. Glad you're enjoying it.

I've been to many, many markets like that. They're very similar worldwide. (Though the diet varies.)

And I'm enjoying your vacation posts too.

How did I miss this this morning? Sheesh.

I love the garlic braids - they are so long!

And I'm enjoying the vicarious vacation, too!

Glad you're liking the posts.

It's nice to learn what others elsewhere eat and what their markets are like. Thanks for posting about your vacation.

Barbara, it's my pleasure. And it gives me something to write about.

Love the garlic braids. Is it possible most people grow veggies for themselves? Well, I suppose not in Havana.

I think so, Reb. They try to sell a bit, but I think it's mostly for themselves. We didn't see many personal gardens, but we saw veggie plots.

What a wonderful journey. I would have been craving vegys too. I like the idea of each person having the experience of buying/bargaining in a foreign land...cool! Would you be willing to share your recipe for 1000 Island? Never made it before and it sounds like fun.

Polly, good to see you. It was wonderful, but the veggie thing really got to me.

Simple 1000 Island:
1/4 c each mayonnaise and Miracle Whip
At least two tbsp of your favourite ketchup
about 1 tbsp each finely chopped pickle, green and/or red pepper, and onion.
Put together, mix hell out of it and leave the flavours to gather for a min. 10 minutes in the fridge.
If you believe Miracle Whip is a product of the Devil, then double the mayo or use sour cream or yogurt instead for a nice bite. Add about 1/4 tsp of sugar, though, or you'll regret it later.
Dash each salt and pepper.
I use Diana Sauce which is like a moderately upmarket ketchup. The trick is to use enough to get it the same colour as the commercial stuff. Start with two tbsp and take it from there.
Feel free to play around with this and always adjust to your own tastes. I add in a tbsp or so of pickle juice, a drop or so of hot sauce, and I scrape a halved onion over the bowl to get some onion juice in it.