"There are more things in heaven and earth, Horatio, than are dreamt of in your philosophy."

I've been largely gluten-free since late last June, and it is good.
It started as an experiment. I'm gluten intolerant or wheat intolerant and had been getting away with eating Spelt flour for years.
Spelt's in the wheat family and can be used as wheat. It needs a bit of help from gluten substitutes like guar or xanthan gums, but it makes great pie crust, a decent loaf of bread, and baked goods as good as anyone can bake.
But I decided to see what would happen if I punted gluten for a while.
The stuffed up nose I'd enjoyed for years left me. My heartburn took a hike and that means I can rest on my right side while my husband reads me a bedtime story.

I still eat gluten now and again, but I know what to expect and I put up with it. Why? Because my husband bakes with spelt and/ or barley and /or rye flour, and mediterranean cuisine restaurants have pita bread and tzatziki, or pita bread and hummus or...well... you get the idea.


My experiment was only to be for a few weeks, but I felt so good I kept going.
The bloating went away, I had more energy, and in general I plain felt good.
I started to lose weight. A few pounds over the course of a few weeks. I also started going for daily bike rides which must be factored in, but still, losing the gluten was a big part of it.

I replaced toast with pancakes made from flax, rolled oats, assorted different flours like garbanzo bean, or sorghum, or soy, or coconut or almond, hazelnut, or brazil nut, or some combination thereof depending on my mood.
Also I eat more butter now and more olive oil. We've been using coconut lard in baking for years.

I noticed after a few weeks I had to tighten my bike helmet strap. About a week after I did I had to tighten it again. Between June and October I tightened it five times. It should be noted that in July I started taking iodine in the form of kelp. It gave me more energy, I am sure it helped get shed of some of the water I was carrying, and best of all my skin is nowhere near as dry as it once was.

The experiment was only supposed to last a few weeks. It has been more than eight months. I've been working on gluten-free pizza crusts and flatbread, and made a serviceable gluten-free pita bread the other day. 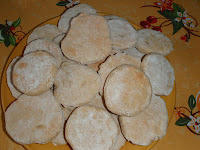 Why am I telling you this?
Because gluten intolerance comes in many forms and ingesting it may exacerbate other conditions.

Am I telling you to try gluten-free?
No.
This is information with my experience as an example.I am telling you what it did for me.
What you do with your life is your concern, no one else's.

I'm glad this worked for you.
But all that tightening of the bike helmet strap has me worried...

I'm very interested. I have a spare tire that I can't seem to get rid of now matter how much I cut back on the carbs. Are there books, recipe and otherwise you find helpful or has this mostly been on an experimental basis.

Fear my bwain is shrinking?
Not to worry, it's just my bloated ego straightening out!

Greenlady, cool to see you here.
May I suggest you check out Wheat Belly blog? There's a book as well and a cookbook now, too. I've read neither, but I do visit the blog. It also has a link for recipes.
Don't substitute simple carbs like rice flour across the board and do not buy commercial gluten- free as they are simple carbs and sugar and taste like crap.
I consult recipes, most of which are online, and make the rest up.
Bette Hagman's Gluten Free Gourmet cookbooks are good references, and the recipes can be tweaked to use other flours.

i am glad that you shared. Who knows who it will help?

Thanks, Tabor. That was my thinking exactly.

When someone tries to be dogmatic and tell me "This works for everyone, and you should do it, too!" well that's when my hackles go up and i get mean.

When someone says, "This worked for me, if you have these symptoms, you might try it and see if it works for you," i know i'm talking to a reasonable person.

Glad mostly gluten-free works so well for you.

so so so interesting....

19yearsGF, I am so glad I did not click on your name.