Gratitude Monday -- Of Cake and Thanksgiving

Happy Thanksgiving to all my friends and family.
I am grateful for all of you.
Yes, even you.
Accept it.

We had the turkey yesterday. It was a small one, about eight pounds. That makes a nice size for Mike and me. I like that it's just the two of us. Holidays deserve their special memories as much as regular daily life does. It's good to have them alone.

I commonly bake pie for holidays, but didn't feel like it this year. I bake pie when the spirit moves me, not the calendar.
Instead we had cake. I'd baked my first ever coffee cake on Friday and in playing around with the recipe I added rum.
I discovered years ago all baking, mine anyway, is improved with a good glug of rum. I saw no reason this cake ought to be an exception.
I found a recipe for gluten free sour cream coffee cake. The sour cream I use is made out of coconut milk and is easy to throw together. Instead of the cupful called for I used about one-third and made up the rest with regular coconut milk.
It's still very rich,
The cup of butter, softened, called for became about two-thirds of a cup of coconut lard to which I added enough hot water to get things all warm and melty.
We have plenty of eggs courtesy my FIL so I used three rather than the two the recipe listed.
The gluten free flour mix I'd made really soaks up the moisture. That's my good reason for glugging in the rum. The real reason is noted above. 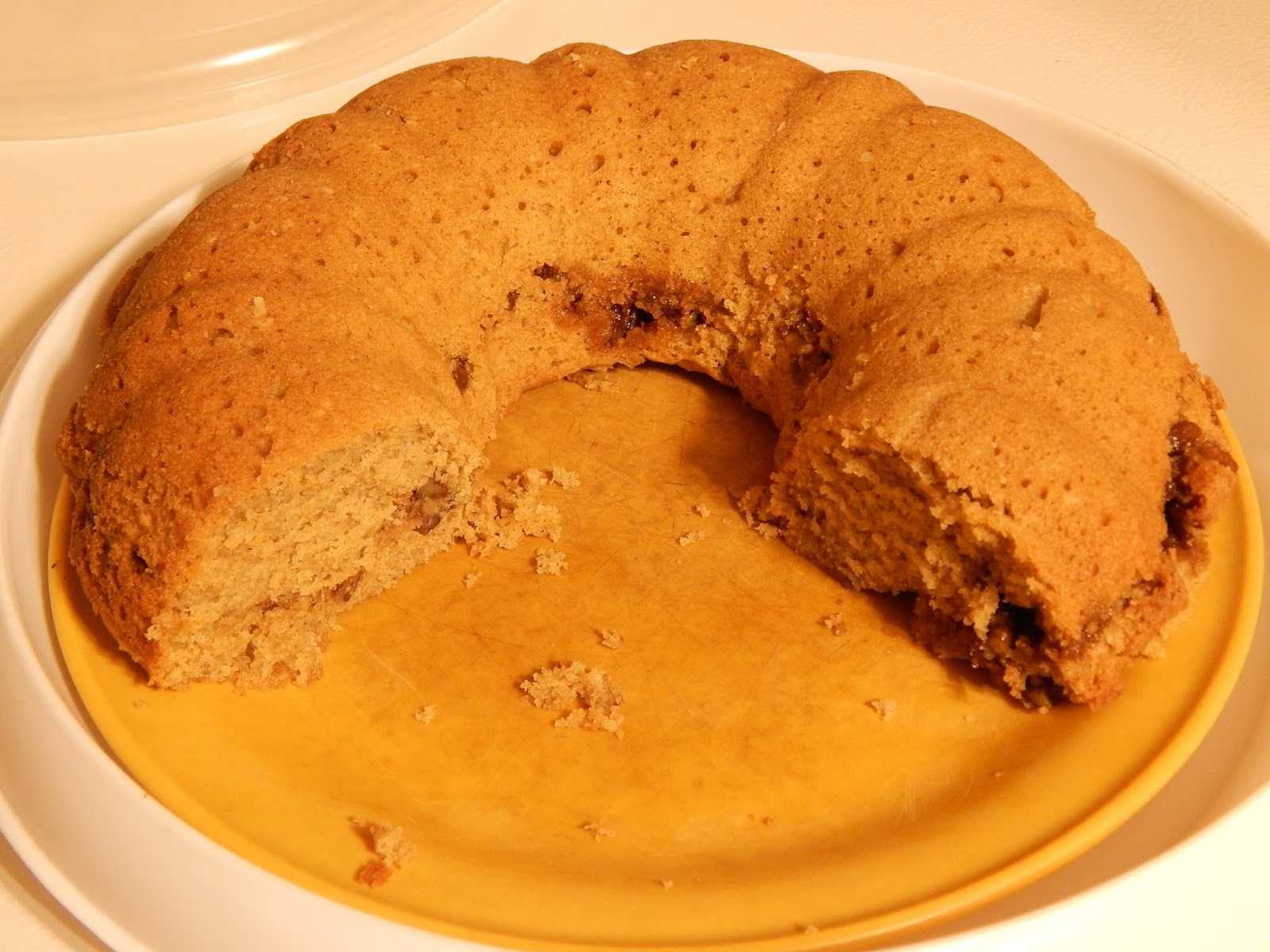 It turned out well and for that I am grateful.
Almost too well. It's hard to stop eating it. We smother it in thick coconut milk which makes it even tastier. If I sound like I am bragging it is because I am. I celebrate when things work out and am not shy about saying so.
I am grateful for that, too.

Happy Canadian Thanksgiving we celebrate next month. Could you post a link to your cake or type out the recipe. I am gluten free to always looking for a good cake especially with the holidays coming up. Again Happy Thanksgiving to you and yours. Take care.

Happy Thanksgiving! I am thankful for you too!

A blessed and beautiful Thanksgiving Day to you and yours; the cake looks so good!

Thanks Kimberley, Messymimi, and Bag Lady. The cake turned out well.

Happy Thanksgiving...my favorite of all the holidays because you get to eat great food and not worry about calories or health!!!

Great way to see it, Tabor.

Shoot, I missed canadian thanksgiving again, can it really have been a year since the last one?

Am grateful for all the awesome Canadians I've met through the web and IRL, still think Canada is a vastly superior country to the one I hail from! Well, except for the weather.

And I want some of that coffee cake darn it!!

Your cake is waiting, Crabby.

Like Crabby, I too am grateful for the Canadians I know. (Not just you all here; I actually know two IRL because I went to school with them.) Happy Thanksgiving! We should have more than one Thanksgiving a year, really.
An eight-pound turkey? What were you thinking? I try to get at least a fifteen pound turkey for ONE. (I lurrrve turkey.)
Leah, I appreciate knowing there's someone else with my carefree attitude to recipes.

You have every reason to be proud of how you adapt recipes to suit your requirements. That's no easy feat but you've made everything appear to be so yummy. I'm certain that it is. As for the rum... how could you go wrong?

Belated Happy Thanksgiving to you and yours, Leah.