Che's Home on the Range 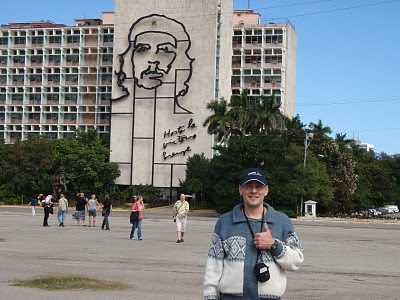 Che and Mike at the Plaza of the Revolution in Havana.

Che Guevara is everywhere in Cuba. He's a revered hero. His bones are in a mausoleum in Santa Clara and a museum is attached to the mausoleum. Guevara toppled a train outside of Santa Clara cutting off supplies to Batista's army. Three days later Fidel Castro took over the country.
Visitors to the mausoleum/museum have to surrender their cameras so you're going to have to take my word for the following.
Whatever else Che did or is reputed to do in story and song my lingering memory of the hero of the revolution is in a glass case in the museum dedicated to him.
It's his Zippy Zither and the music for "Home on the Range." 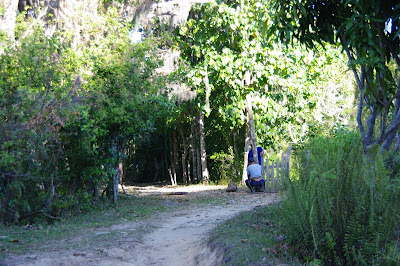 On the way to Che and Fidel's mountain hideout high in the Sierra Maestra mountains above Santo Domingo.
Posted by Leah J. Utas at 2:06 AM

Surrender cameras...that is very weird. Thanks for documenting this trip--it's very interesting.
mary

I don't understand what they were worried about.
You're welcome, Mary.

I guess they have their ideas about how to keep the place sacred.

Maybe photography is evil tool of free counties everywhere and you were going to somehow alter the photos to portray the museum in a bad light?

I suppose so, Messymimi.

I would love to make it to Cuba.

Im currently reading Skateboards Will be Free.
Have you read it?

You can do it, Carla. I know it might take a bit of fancy footwork until things change.
I haven't heard of that book. Must go look it up.

I fail to see the reasoning behind the no camera rule.... unless they think someone would take photos, then make money from selling them. Damn Capitalists.

Maybe that's it. As it is most places charge extra for using cameras. I don't know why this one didn't.

It's amazing how much they revere their heros in some countries! It's too bad you had to give up your camera. Maybe they thought you would publish the photos and cause bad publicity for the country in our free world.

Maybe that's it, Redbush. It seemed a bit much, but that's their call.