Twofer Tuesday--A Leprechaun for Your Thoughts 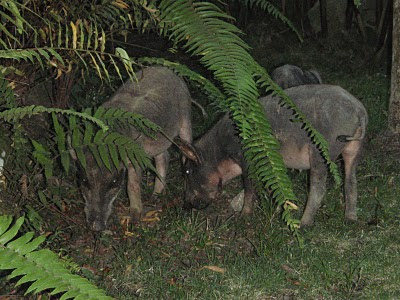 The Three Little Pigs in Santo Domingo
I've started editing A Fly On The Wall. Some of the characters weren't named until later so one of the first things to do was replace the placeholders with the names. It gave me a sense of accomplishment.
The first pass is for fixing obvious errors so I tend not to worry too much about Big Things Needing Fixing, but I've already spotted a glorious mess-up. I compromised by making a note of it to be dealt with later.

Reading took a back seat this past week. I have no reason, it just happened. The days may be getting longer, but they are also going faster.
I'm still reading All Quiet on the Western Front (by Erich Maria Remarque, First Ballantine Books edition 1982). It's compelling, it's stirring, and it's grabbed my innards and will not let go.
Here's a bit:
"We bayonet the others before they have time to get out their bombs. Then thirstily we drink the water they have for cooling the gun."

This is my contribution to the cause this week from A Fly on the Wall. It's close enough to St. Patrick's Day that I thought I should include a selection involving a leprechaun.

"Parsley Wornstaff had not thought his life was going to turn out this way. He was a careful fellow and minded his own business most of the time. In all the hundreds of years of sitting at the end of the rainbow on a desolate hill in Old NewBridge-Barrowsmith he never thought anyone would actually catch him."

Thanks for reading me.
For more or to get in on the fun please see the Women of Mystery.

**
If you're wondering, the photo has nothing to do with the body of this post.
Posted by Leah J. Utas at 1:10 AM

Sitting for a century at the end of a rainbow must be a good place to be.

It has its up side.

Well, and here I thought the three little pigs meant I was going to get a fairy tale, not a leprechaun!

Parsley Wornstaff is a great name! Fun stuff. And here I thought I had the tie-in for the photo all set but it turns out I had the wrong country and season for Hog-manay. ;)

I was going to salute Parsley's monikker, too. We used to have a dog named Parsley. Less magical, he was, and instead of conferring a pot of gold, it was usually something ingot-sized deposited in a kitchen corner.

Hilary, glad you like it. You've given me an idea for a New Year's pic. Thanks.

Clare, thanks. Well, dogs will be dogs.

And after the Grand March tomorrow, when I tell the Leprechaun stories to the grandkids as they sit under the Leprechaun Hat, I will read your lines about Parsley, and we will take turns saying what we think will happen.

I tell you now that granddaughter #2's answer will involve sweets--cookies, cupcakes or candy.

I haven't read a good leprechaun story in a long time. Yours has a feel to it that makes me want more.

df Terrie, what a wonderful way to spend the day. I'm curious as to what they think will happen.

Thanks, Messymimi. I tried to give Parsley's backstory something interesting.

Great lines, cousin! I had such a hectic day yesterday, I didn't get around to commenting!
I love the idea of sitting at the end of a rainbow. Perhaps not for a whole century, though....

Thanks, df Bag Lady. Maybe you're just not cut out to be a leprechaun?

So, here is what the grandkids thought: Parsley Wornstaff is a perfect name for a Leprechaun. Old NewBridge-Barrowsmith is an hysterically funny name for a village. (That may be because Grandma is presently residing in Old Bridge Village.)

The general consensus is that Parsley is very smart because he is careful and would get out of trouble by being smart and lying if he had to.

Everyone thought he'd come out fine in the end, even the grand daughter with the cupcake in her mouth!

dfTerrie, thank you. I'm glad the names were such a hit. And they are absolutely right about Parsley's character.