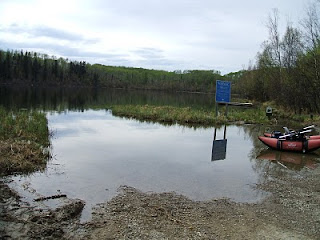 Unlike in the photo above, some warning signs are best left alone. However, I am still grateful that the people who were concerned with my latest ECG took the steps they did.
I was to see my cardiologist last week on a routine visit through telehealth. That's a camera hookup that allows us to be more than 100 miles apart and still talk face to face. I needed an ECG first so he could see what was happening with me.
Said test was done on the Friday that started the Victoria Day weekend. The lab tech (forgive me I do not know the proper title) was concerned, showed another lab tech who was concerned, who then showed it to the ER doctor who was concerned.
I had to have a second one and then was escorted to ER for more tests. I didn't believe there was a problem but I don't know how to argue with a machine. I do not have those skills.
Because of the reading on the test the Dr. put me on rat poison. He gave me a choice and I was sore tempted to say no. But for all I knew I needed it and he did note it was until at least I saw my cardiologist on the following Thursday.
I took the Warfarin and had to come to the hospital every day until the following Tuesday to have my blood clotting rate checked.
This has a happy ending. My cardiologist took me off Warfarin and said he'd make it clear to the local doctors that I was not to go on it again. Daily low dose aspirin does the job.
The local doctor did not have the background on me to know that. He was doing his job and putting all his skills and knowledge into helping what appeared to be a problem. I am grateful to him and to the lab techs for acting on what they saw. I am also grateful that I likely won't have to go through this again.
In fact, I am so healthy --but for that annoying irregular heart rhythm nonsense-- that I don't need to see my cardiologist ever again unless something unusual, good or bad, happens.
I am grateful for that.
The few days I took Coumadin again are but a blip, a few days out of a lifetime. They don't mean anything other than we have medical personnel on the job who see that someone may be on thin ice and who light a fire under their skills to take care of it.
Posted by Leah J. Utas at 1:09 AM

A clean bill of health: excellent!

so so thankful (grateful :)) theres a clean bill of health HAPPY ENDING MONDAY.

Thanks, David. It feels good to have this sorted out.

Carla, thank you. I love a happy ending in real life.

I, too, am grateful for your clean bill of health, and that the ER doc was on top of things, even if it was unneccessary.
:)

Thanks, df Bag Lady. It's all worked out for the best.

Doesn't that feel good to get a positive answer about a health issue. I love that feeling of ... wow, I'm going to be okay.
I'm so happy for you.
Mary

Mary, thanks. It does feel good. I'm stuck with A-fib, at least for now, but I don't have to spend much time thinking about it.

So glad to hear that you have a clean diagnosis. And it's refreshing to hear someone express appreciation despite going on unnecessary meds. Though it's no surprise that it's you.

Hilary, it's all in how you look at it. I had a choice: anger or gratitude. The latter served me better.

I'm happy to read that all is well. Your photography is beautiful, thanks for sharing it with us!

I'm in a similar situation, no need to see the cardiologist unless the tachycardia bothers me.

Brad, thanks so much. I've had a quick look at your blog. I love the pics.

Messymimi, glad yours is under control. It's a good feeling.

Glad to hear everything worked out well.

When I was first diagnosed with DVT the ER doctor told me that in time I would 'know' how much warfarin to take as to the amount of swelling in the leg, and that this 'knowing' might contradict with another medical doctor's opinion. He said to go with my 'knowing' as it was most often correct.

So, your 'knowing' Leah is working quite well, and it's unfortunate the local doctor took the steps he did. In Ontario there is medical information available to all doctors online on a patient who agrees to this sharing. That might have helped in your case.

I fairly cringed when I read you were on Low dose aspirin and then the doctor prescribed warfarin.

Barbara, thanks. I have abnormal ECGs all the time. This was the first time a lab tech was concerned and that's why I didn't argue much. Also, I was due to see my cardiologist in less than a week. The Warfarin would have barely kicked in by that time. They put me on higher doses than I thought necessary, bu it was only a few days. I'm armed now should another Dr. be concerned.