A controlled burn was done in the West Country this past summer. There were several reasons for it including an attempt to stop the mountain pine beetle.
The forest regenerates all on its own after a fire, but years of fire suppression messed up the cycle. Another reason for the burn was to sort the cycle out.
Life has started again out west and in respect of this, and to explain why fire is good, an interpretive trail has been set up at the start of the Landslide Lake hike, about an hour and 45 minute drive west of Rocky, or just a few minutes east of Saskatchewan Crossing along the Icefields Parkway.
Two trails, one 400 m the other 2km have been built. We took the shorter one on Sunday.
Here's what it looks like. 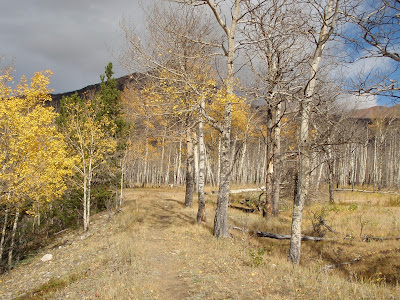 The start of the hike. 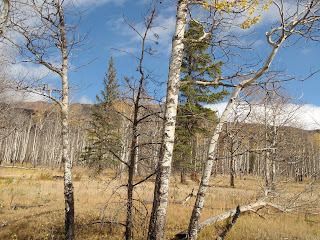 It looks eerie, but it has a good feel to it. 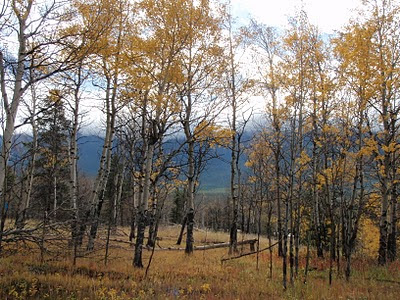 This is what you see on the way back to the parking lot. The trees are touched by fire, some killed, others charred. Either way, it's closer to natural than not having fire. 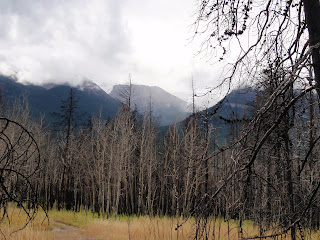 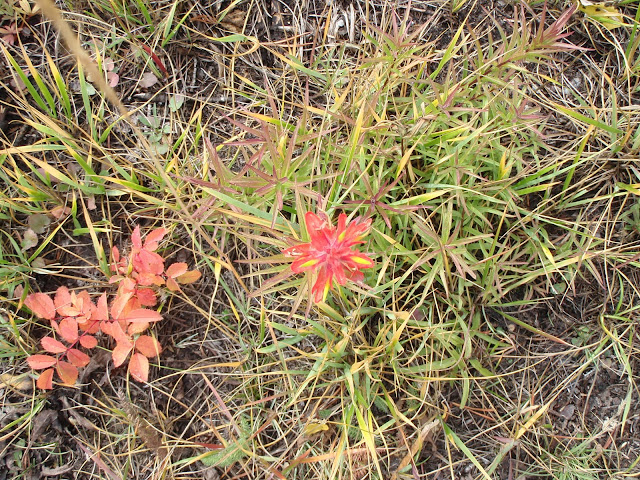 Life comes back for a brief moment. This blossom to the right is paint brush.

We passed lots of areas that have been devastated by the mountain pine beetle. It was sad.

I hope this does the trick to stop that pest. Great pictures.

Looks like a very interesting hike. Fire is a necessary part of life, lets hope it did the trick with the pine beetle.

Thanks, Messymimi. I hope so, too. What we really need is a few weeks of at least -40C to get them good.

It was, Reb. And easy, too. I'm sure it's done something.

Thanks for the pics. Fire suppression has been the cause of many problems in the forests.

Interesting country and beautiful in its own way.

Fire suppression has been a major problem in Australia. They've recently got to understand that much of their countryside needs a burn every few years.

If it happens frequently the fire races through and doesn't kill things. If you stop the fires then when it does happen, there is so much undergrowth that the fire is massive and kills everything.

Many of their plants need a fire to open the seed pods.

There ends the history lesson on Australia!

Ron, it sure has.

Dawn, I'm glad they've come around. It's taken us a while, too.
Pine seeds need heat to open, if memory serves, so fire is good.

A wonderful demonstration, Leah. After a small fire in the field across from Frank's place last year, I noticed how incredibly lush the the growth was in that area shortly afterward. I hope this does the trick for the pest population.

I hope so too, Hilary. Fire is important for regeneration.

Fire can also be attributed to life. Yes it burns and destroy but after the destruction is re-birth. Just look at the photos. They are brimming with colors and life.