All Hallows Even is soon upon us. I’ve observed Samhain, the Celtic New Year, in one form or another for more than a decade now including taking in a Loreena McKennitt concert in the mid-1990s.

My celebrations involve food and several foods from apples to wormwood (think tarragon), corn, and Dittany of Crete (Origanum Dictamnus, a variety of oregano) are associated with Samhain. Dittany of Crete is used in astral projection. I’ve grown it and I love the energy of it, but I have no experience astrally projecting with it.

This brings us to the Nightshades, an interesting and varied family with some really deadly members. It’s the killers which are associated with Samhain as well as Beltaine, observed in the spring.
Well, Nightshade is Nightshade to me. As long as it’s in the family I figure I can use it. Thanks to my husband’s botany textbooks I learned that eggplant (Solanum melongena), bell peppers (Capsicum annuum), potatoes (Solanum tuberosum), and tomatoes (Lycopersicon esculentum), are members of the Solanaceae or Nightshade family.

Tomatoes were thought “poisonous because many European members of their family (the Solanaceae) have bitter fruits containing toxic or hallucinogenic compounds.” (p.119. Economic Botany: Plants in our World by Beryl Brintnall Simpson and Molly Conner-Ogorzaly. Copyright 1986, McGraw-Hill Book Company.)
Lycopersicon esculentum, is Latin for “juicy wolf-peach,” the text book said. “The German common name ‘wolf-peach’ reflected the belief that the fruits could be used in cabals to evoke werewolves.” (IBID)

Reading on I learned that alkaloids from the potato family control muscles spasms. The solanaceous alkaloids are hyoscyamine (and l-hyoscyamine), atropine and scopolamine (or hyosine).
Technically, they’re known as tropane alkaloids and are commonly extracted from Atrope belladonna. (IBID p.371)

Anyway, with potato, tomato, bell pepper, and eggplant to work with I knew I could do something. My husband likes veggies, even eggplant, so I wanted something we’d both enjoy.
A few experiments later I had the Solanaceous Supper that’s become a Samhain tradition.

It’s easy to prepare and creates few dishes making for a fairly quick clean up. Here’s what to do:

Peel, slice and salt a firm, healthy medium-sized eggplant. I’ve read that they don’t need salting, but I feel better doing it. They’ve got lousy public relations already, finding a bitter one won’t help their cause.
Let it leach for at least a half-hour then dry with paper towels and cut into bite–sized pieces.
Take a large, healthy, firm green pepper. Remove stem and seeds and cut into small pieces. Imagine you’re making a Greek Salad and cut accordingly.
Use between four and six medium potatoes. This depends on the size of the spud and the number of people you’re feeding. Chop into small pieces. Peel or not as you see fit.
Use four to six medium-sized ripe tomatoes, chopped.
Use at least a half-cup of chopped onion. I use purple because it’s tasty and it looks good.
Mix together in a 9 x 13” casserole dish and coat with cold-pressed, extra virgin olive oil and add good quality red wine vinegar.
Spice it with thyme, basil, and oregano along with your choice of parsley, chervil, and/or garlic. If you like, then sprinkle some cayenne on it, too. Capsicum frutenscens is also in the Solanaceae family. Use salt and freshly ground black pepper to taste. 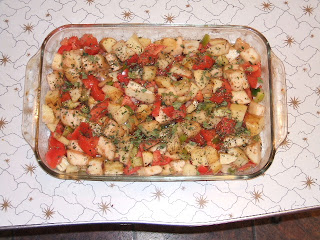 Cook at 350 degrees. It’ll take about 50-60 minutes. At the 40-50 minute mark remove from oven and sprinkle a cup of finely chopped Feta cheese on it. Return to oven for about 10 minutes or until potatoes are fork tender.

Allow to sit for at least five minutes before serving. When serving on Samhain always set an extra place at the table. On this night the veil between the worlds is at its thinnest and otherworldly guests should be made welcome.
Posted by Leah J. Utas at 6:28 AM

Leah that sounds and looks absolutely delicious. I love all of those foods and will definitely try that one day soon. I just don't think I'll mention the eggplant part to the kidlet, or the kidlet-minded.

It's a very foggy morning here, and your full post just seemed to fit the mood. It made my day. Thanks for that. :)

Thanks, Hilary. Not many eggplant fans around so I'm glad to learn you like it. When you get around to trying it please let me know what you think.

Gee, Leah, now I'm starving! That does look good. Next time I get groceries, I'll pick up an eggplant so I can give it a try.
Gotta go have some cereal now.
Oh, Hilary, it's clear as a bell here, but it's also -5C...

That's minus 5C, by the way

I love eggplant and have several vegetarians in the family so this is a great recipe for me to try!

It looks fab and would make a great Halloween dinner. With all the in and out of the house (trick or treating and answering the door for trick or treaters) this could be prepared ahead and just popped into the oven at the appropriate time.

As as aside, since I write mysteries I just attended a lecture on poisons that grow in our back yards and how long they take to kill in what amounts, symptoms etc. Very interesting.

It's interesting how many people think they don't like eggplant but will eat it happily if they don't know it's in something. (The Lobster comes to mind).

That casserole sounds awesome and looks delicious. It's not even 8 am where I am and it already made me hungry for some veggies!

Yes, Terrie, you could store this in the fridge or even at room temperature if it wasn't for too long. Covered, of course, so the eggplant doesn't get all icky looking.
It's fascinating to learn the properties of some of our common plants, isn't it? There are plenty of poisons and legal hallucingens growing right under our noses.
I am blessed to be married to a man with a botany degree.
If you try my Nightshade Casserole, please let me know what you think.

Sometimes you just have to disguise eggplant, Crabby. And you're right. I wonder how many people happily gorge on Baba Ghanouj without knowing they're eating eggplant?

I'll let you know for sure Leah.

Child, if I ever tried to serve my mama eggplant she'd have my head. Her grandmama used to slice up eggplant into big rounds and fry it up - no salting process to leech out bitterness at all. Then My great-grandmother would serve it up to my mama, aunts and uncle between two slices of bread and call it a meal. To this day, nearly 70 years later, my mother and uncle refuse to go near the stuff. Oh well, one day I'm going to make moussaka and see if I can get her to eat it. Or maybe baba ganoush...

Leah, I suppose it would be childish to use your comment section to stick my tongue out and make rude noises at Hilary, wouldn't it? Damn, I knew it. ;)

Well, aside from potatoes, I guess the nightshade family & I just are not meant to be friends. Well, I haven't had a true test of eggplant, so, maybe that is too much of a blanket statement.
Sis, will remember our first encounter with eggplant, or at least that is what we thought it was! (in Italy, our mystery meal, with the really bad waiter)

Oh, my. Eggplant sandwiches. I think that might be a bit much, Virgina Lee.
Good luck with the moussaka and/or baba ganouj.

Do as you see fit, Bag Lady.

Reb - Sorry to hear you and the Nightshades don't get along.

Nightshade casserole sounds interesting. Wow, I didn't know you were interested in Celtic spirtuality, Leah. Is that just for intellectual curiosity or something else? Either way, that's very cool.