Abu Simbel-- A Temple On the Move 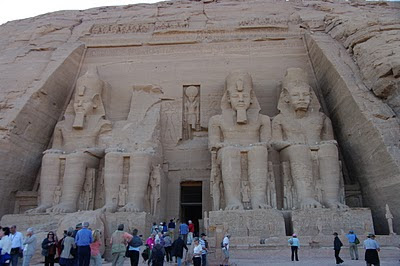 This temple was originally built by Ramses II. The four statues of the Pharoah were cut out of a single slab of rock.
Abu Simbel was  one of the many temples threatened by flooding when the Aswan Dam was built in the 1960s. Rather than lose this magnificent monument it was cut up and moved up to higher ground. Lake Nasser has put the original site some 60 metres underwater. 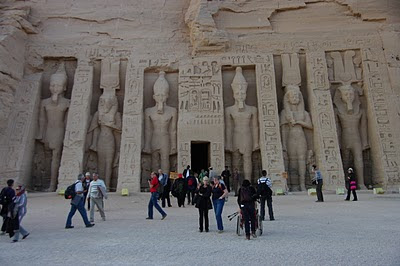 Next to it is the Temple of Hathor which was built for Nefertari,  Ramses' wife.

We were able to go in and look around these temples. It's so hard to image the painstaking work in building them, never mind moving them.
Posted by Leah J. Utas at 1:21 AM

Unbelievable! Incredible that they were built in the first place, but what a feat to move them!
Cool!

You've got that right, Bag Lady. It's humbling.

What Sis said ;) Can you make out seams in real life? I can't see any in your photos. Just an astounding feat, both times.

Reb, I couldn't tell where the cuts were made. Magnificent. And they had to hand saw them as the vibrations from a power saw would have ruined the statues.

I remember reading about these statues. What an enormous job - but how good that they bothered.

Dawn, we saw a documentary on the move on the cruise. It was an amazing job.

Powerful. Must be even more so in person.

That's just incredible. I'm glad they were saved. It's mind-boggling to think of what work has gone into these structures.. twice.

Hilary, it is beyond me. But I'm glad it is not beyond human capabilities.