Our Nile Cruise included some entertainment such as a Belly Dancer and a Dervish. As long as I kept in mind this was showtime for tourists it was tolerable, but I have to say I was disappointed.
The Belly Dancer looked more angry than anything. I couldn't bring myself to take any pictures.  I've seen Belly Dancers at Greek restaurants. Those women were happy, loved their bodies, were proud of the culture and history they represented.
Nothing of the sort appeared on the cruise's dancer's face. It didn't help that we were in the lounge with flashing lights and a loud, driving beat that was totally unsuited to belly dancing.

For as appalling as that was, the Disco Dervish was worse. 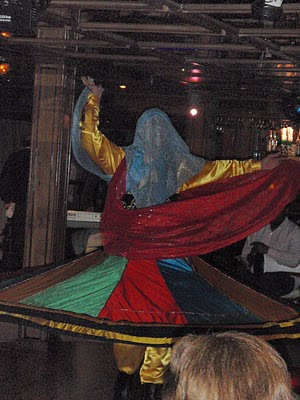 He put on a good show. I'll give him that. 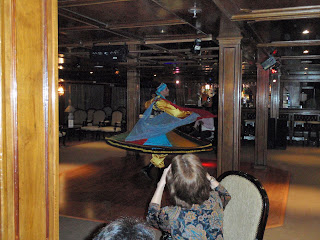 His costume came complete with  some lights along the bottom skirts.  When they came on he looked like a Christmas tree. 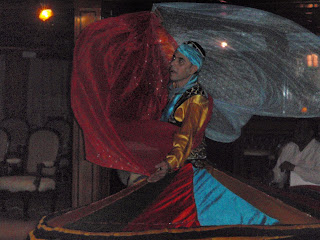 I took a few photos, but I was appalled at this bastardization of a culture and religious belief.  I'd wanted to see a real Whirling Dervish. It was a vain hope of course, because real doesn't sell.
Like the Belly Dancer before him the Dervish played to flashing lights and a driving beat.
I wanted a taste of the culture, not a headache.
#
Yes, I've complained all through this post. I don't like to complain as there are good things in everything, but sometimes the appalling must be given its due.
Posted by Leah J. Utas at 6:23 AM

How sad that the entertainment was not enjoyable. It's almost as though everything needs to be pimped up to make it appealing, when the opposite is actually the truth.

So true, Bag Lady. It's a sad turn we've taken.

Sad about that. It is as if real is no longer good enough.

I think I would have felt the same.

Bossy Betty, thanks for the support.

It gets tiring...everyone thinking they need to add or change or re-invent something that is already real....thinking they can improve it.
Our society never stays satisfied with things the way they are....messing with the original.

Look at all the Cokes they've come up with;)

I suppose part of the reason for the entertainment evolving to be unrecognisable, stems from the fact that so many tourists do not know what they are supposed to be seeing. That and the "I can be flashier than you" attitude amongst performers. I am sorry that you didn't get a good show on board.

I'm a big fan of bellydancing, even many of the modern takes that more traditional folks scoff at, as my wife has been very involved with it as long as I've known her. So I don't mind new takes on old traditions.

However, performances for the benefit of tourists are often iffy propositions at best. Saw a little of this in the Indian village we visited in Panama. Day in, day out . . . I'm sure it's difficult for them to stay enthused.

When it turns into nothing more than a 9-5 job, culture loses and becomes less than. Not pretty to watch, complain all you want about it.

Dawn, LOL on the Coke variations.
I'd be hard pressed to call what I saw an improvement.

Chris, you've got a point. They know they're putting on a show for a bunch of people who don't know any better.

Messymimi, I'm sure I will.

Well that's disappointing. I'd be disappointed too. Sometimes ignorance is bliss.