Spuds Merengue. What Food Bores You?

This seemed like a good idea at the time. 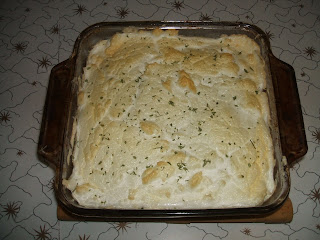 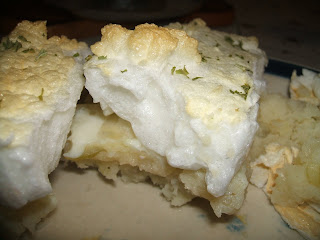 Some culinary experiments are best left unperfected. The other day I made Spuds Merengue and it’ll be a one-shot wonder.
Mike had baked. He made Wickelkuchen (rolled coffee cake) and it is magnificent. The recipe called for four egg yolks plus one whole egg. We had egg white. We wondered what to do. I was inventing a potato dish with some sweated onions and had the brilliant idea to put a meringue on it. I prepared the onion and mashed the potatoes. I put a cup of onion in the spuds and let it sit in the fridge for the afternoon.
It reheated in the oven for 20 minutes or so and Mike whipped the egg whites for me. I spread them on. It cooked another 12 or 15 minutes. I sprinkled parsley on top. It looked good.
It’s not.
It is quite possibly the most boring thing I have every created.
I’d be ashamed, but it’s too dull a dish to warrant such a strong emotion.
Oh, it’s edible. A truly hungry person would appreciate it. And there’s nothing wrong with it. The poor thing is terminally boring, that’s all. We called it “merengue” simply to give it a bit of spice. It’s like adding an exclamation mark to a sentence to fool the reader into thinking something exciting happened.
And that brings me to a question. What’s the most boring thing you ever cooked?

This is Wickelkuchen. It needs no punctuation. 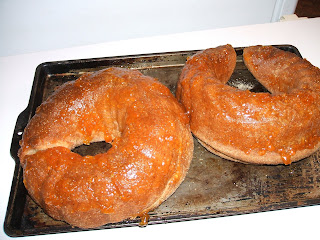 Id have to say, for me, pretty much everything.

which is to say my I! LOVE! IT! is another (wo)mans boring.
I like my excitement (wink) off the plate.

It does look really nice!! I love eggs and potato and surely the protein/carb combo would make an egg-cellent postworkout snack. But I'll take your word for it.

I have come up with some crazy/awful combos in my bid for low-calorie snacks. The most dreadful one was a combo of mashed carrots, egg whites, cinnamon and Splenda. To ME it tasted OK, but anybody who knew anything about food would have thrown it straight in the bin.

Whatever works for you, MizFit.

*Eggcellent* well done, Tokaiangel.
Maybe with a bit of work it would be okay, but I'm going to leave bad enough alone.
Were you re-inventing carrot halvah?

Looks to me as though the rolled cake would more than make up for the boring potatoes!

And I cannot think of any recent food disasters. That doesn't mean that there haven't been any, mind you!

Oh it surely did, df Bag Lady.
Have to agree with the white rice.

That's too funny. I love your exclamation point reference.

You could have improved that dish considerably by removing the bottom portion and replacing it with a lemon pie... drool! ;)

Thanks, Hilary. You're right. Meringue has it's place,and that place is above lemon pie filling.

I would have thought it would have been excellent--interesting experiment.

re: My response to Hilary.
Its. Its. Not it is contracted, but its.

I can perk up oatmeal with maple syrup or raisins or cranberries, but I take you point.

I can't think of anything that stands out as being more boring than anything else I cook. Oh, that's sad.

The rolled cake looks wonderful though.

Not sure what to say about that, Reb. The cake is very tasty.

Leah - possessive - its' (which has, apparently, fallen out of fashion.)

At least, that's how I remember it, but gosh, it's been years since I was in school.

Pretty much every food that is good for me is boring to me.

Hence my omni-present battles with myself over health issues.

Oh, dfTerrie, that's not very good.
Can you perk things up somehow?

Knowing your love of photography, I thought you might want to take a look at the picture that Alex Keto has up on his blog today.

Thanks for the link. That pic is amazing.

lol Leah. I made the exact same boo boo in a comment to you the other day, and resisted going back to correct it. Next time I won't. ;)

I'll be round straight away for that Wickelkuchen. The potato meringue? No thanks - I'm full.

Please note that I did an entire comment without a single exclamation point. That could be a first for me.

Your place is set, Dawn.
And you've showed admirable restraint over the excalamation points.

Hi, so sorry to "barge" in. We are having a discussion over @ the Old Foodie about Wickelkuchen. I was wondering if you could share a bit of information about the recipe and its place on the Christmas table.